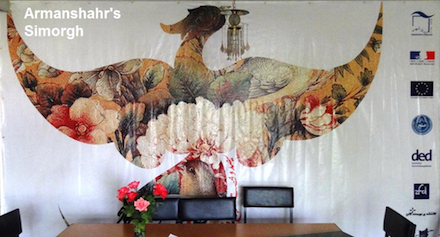 I’ve just returned from a week in Kabul, where I took part in conferences organized by the cultural foundation, Armanshahr Open Asia. I had hoped that the trip would allow me to visit at least some parts of Kabul that I had seen during my 18-month stay there eight years ago and to meet some of the friends I made then, and about which I wrote in my diaries, Kabul Days. Alas, that was not to be. This was partly due to the demands of work, but mostly because of insecurity. Not a day passed without either actual violence in Kabul, or the threat of it because of clashes elsewhere, making it difficult to justify going out without an urgent purpose.

However, even a short stay, indoors, gives one the chance to make comparisons between Kabul over the space of eight years. The first change that is noticeable is the development of Kabul airport, which now has a bigger departures-and-arrivals area for international flights, and walkways that are connected to the plane to allow the passengers to enter the building directly, rather than disembark and walk or take a bus to the arrivals lounge. Also, more immigration officers are at work, resulting in faster processing of passports. The area around the airport has been developed into a pleasant park, with trees and lawn and sitting areas.

Driving to the city, new, colorful, multi-storey buildings catch the eye: apartment complexes as well as office blocks and wedding halls. A week later, on the way back to the airport at the end of my visit, I saw extensive damage to one wedding hall as a result of a suicide bombing earlier in the day that had killed 14 people. Some call these buildings ‘poppy palaces’, built with the proceeds of the opium trade, which may well be an accurate description. The roads are as congested as before and air pollution as pervasive.

At the Armanshahr office/guesthouse, I heard the happy news that electricity was available round the clock, thanks to imports from Uzbekistan, and piped water every other day. Both of these are major improvements, although there are still many in Kabul who do not enjoy either. On my only venture to the city centre, I saw groups of children on their way to school, a happy sight which was rare eight years ago.

However, during the week, the flow of news and conversations with friends demonstrated that life in Afghanistan is filled with more tension than before. The Taliban who were overthrown by the US-led invasion in 2001 are now in control of many parts of Afghanistan, at least at night, and carry out repeated attacks in areas where they do not have direct power, including Kabul. Memories of two decades of violence before the fall of the Taliban are also still fresh on the minds of many people, resulting in friction, if not conflict, between various ethnic communities.

Troops from more than more than forty countries, mostly the United States and Britain, who have been fighting the Taliban are now preparing for their planned departure by the end of 2014, creating widespread fear about what might happen after they have left. Many believe the country will witness another civil war. Although this may be an exaggeration, renewed clashes across Afghanistan are likely, as the Taliban will try to expand and consolidate their power.

Added to this will be the financial pressure created by the slowing down of foreign contributions on which much of the new physical and social developments in Afghanistan have depended over the past eleven years. Many, if not most, non-governmental organizations supported by foreign donors, who have done much to promote the concepts of human rights, women’s rights, freedom of expression, pluralism, conflict resolution, responsibility, accountability and democratic governance in Afghanistan are unlikely to survive for long.

Were this to happen, it would not be the first time that efforts to bring about progress in Afghanistan, albeit under a military shadow, are blocked and the country pushed back even further. However, it would be the first time that the loss is inflicted after the involvement of some forty countries in Afghanistan over nearly one-and-half decades, and it should give cause for embarrassment to all of them.

Some, including this author, believed from the beginning of the US-led invasion that the problem in Afghanistan did not have a military solution, but had to be dealt with through a package of measures: judicial, to take Al-Qaeda to task for the 11 September 2001 attacks on the US; economic, to improve Afghanistan’s infrastructure and enable its people to create a decent standard of living for themselves in their own land, rather than live in extreme poverty at home or as refugees; and socio-political, to bring about a reconciliation of groups that by 2001 had already been fighting each other for nearly ten years, and establish a democratic government

Eleven years on, with a cost to the United States alone of nearly $570bn, the most that can be said to have been achieved through war has been the killing of Osama Ben Laden in Pakistan in the tenth year of the war. Inside Afghanistan, the warfare has not ended the Taliban’s influence. In recent time, the tide has turned against the US-led forces. On average, one US soldier is killed in Afghanistan every day. So far this year, more than 50 foreign troops have been killed by attackers either serving with the Afghan army or police, or wearing their uniform.

Overall, more than 2,000 American troops and more than 1,000 from other countries have been killed in the war since 2001 (for details see Iraq Coalition Casualty Count). The fighting has also “caused the deaths of thousands of Afghan civilians directly from insurgent and foreign military action, as well as the deaths of possibly tens of thousands of Afghan civilians indirectly as a consequence of displacement, starvation, disease, exposure, lack of medical treatment, crime and lawlessness resulting from the war” (Wikipedia).

In humanitarian terms, it is difficult to argue that this bloodshed has done anything to bring to justice those who caused the deaths of more than three thousand people in the 2001 attacks on the United States. In military terms, the US-led force has become the latest foreign military presence to fail to subdue its opponents in the rugged mountains of Afghanistan. The most recent evidence of this failure came on 14 September 2012 when a group of Taliban fighters, wearing US army uniforms, penetrated a heavily fortified camp in the southern province of Helmand, killed two American troops, wounded several other soldiers, and destroyed several US military aircraft.

Economically, during the war Afghanistan has turned into the largest producer of opium in the world. This is no surprise, given the absence of any significant alternative source of income, in a country with an annual per capita GDP of $1,000, which puts Afghanistan 213th out of 226 countries in the CIA Factbook. Poverty, inevitably, also breeds corruption, so much so that talk of the subject, including regular anti-corruption pledges by the authorities, tends to become tedious.

All of this is likely to get worse after 2014, unless something is done now. “What is to be done?’ will be best discovered by consulting Afghanistan’s own nascent civil society which has been marginalized, rather than the powerful factions that have taken centre stage, with international support. It is still possible to imagine the beginning of a genuine movement towards rebuilding the country’s infrastructure – houses, schools, clinics, roads – and its agriculture and industry. This will cost a fraction of what has so far been spent on the fighting in Afghanistan, but will yield much better results than the futile 11-year old war has, both for Afghanistan and for the rest of the world.

For a glimpse of Kabul, please see this video.