“Democracy” by the Sword 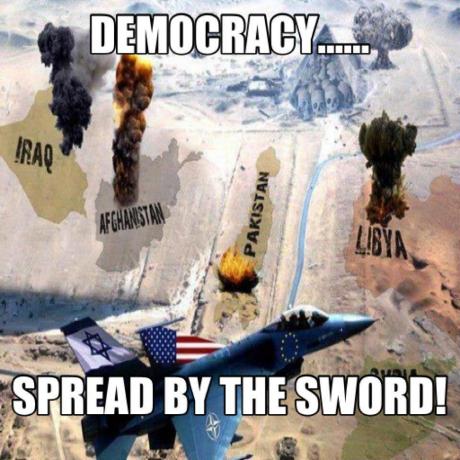 I know no country in which, speaking generally, there is less independence of mind and true freedom of discussion than in America. In America, the majority has enclosed thought within a formidable fence. A writer is free inside that area, but woe to the man who goes beyond it…Formerly tyranny used the clumsy weapons of chains and hangmen; nowadays even despotism, though it seemed to have nothing more to learn, has been perfected by civilization. Princes made violence a physical thing, but our contemporary democratic republics have turned it into something as intellectual as the human will is intended to constrain. Under the absolute government of a single man, despotism, to reach the soul, clumsily struck at the body, and the soul, escaping from such blows, rose gloriously above it; but in democratic republics that is not at all how tyranny behaves; it leaves the body alone and goes straight to the soul. In the proudest nations of the Old World works were published which faithfully portrayed the vices and absurdities of contemporaries but the power that dominates in the United States does not understand being mocked like that. The least reproach offends it, and the slightest sting of truth turns it fierce, and one must praise everything, from the turn of its phrases to its most robust virtues. No writer, no matter how famous, can escape from this obligation to sprinkle incense over his fellow citizens. Hence the majority lives in a state of perpetual self-adoration; only strangers or experience may be able to bring certain truth to the Americans’ attention ~ Alexis de Toqcueville