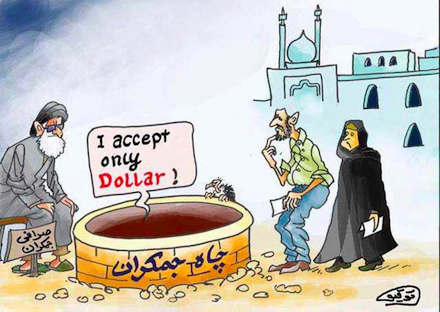 In response to the nation’s currency plunge, Tehran was hit by protests on Wednesday, October 3. Hundreds of anti-riot police stormed the capital’s currency exchange area of Ferdowsi Avenue and Tehran’s Gran Bazar. Arrests were reported. On Monday, October 1, the US dollar was sold at 29,700 rials in the free market but by that evening it sharply increased to 35,000 rials.

On Tuesday October 2, rumors were circling that President Ahmadinejad would announce new measures to confront the rial’s downward spiral. As a result, the US dollar fell to 33,200 rials. However, no solution or plan was presented. Instead, Ahmadinejad used the press conference to directly attack the speaker of the parliament, Ali Larijani; the judiciary branch; Tehran’s municipality; and indirectly, Mohammad Bagher Ghalibaf, said to be one of the favorites for winning the June 2013 presidential election. Ahmadinejad also sharply criticized Fars News Agency, affiliated to Iran Revolutionary Guard Corp. (IRGC), as one of the factors that has contributed to the rial’s nosedive.

The market, disappointed by Ahmadinejad’s press conference, immediately reacted. Iran’s rial lost another 10% of its value in a few hours. The US dollar was sold for 36,200 rials shortly after Ahmadinejad’s conference. This rate represents one third of the rial’s value a year ago. The following day, trade came to a halt in Tehran’s Great Bazaar. The free-fall of Iran’s rial and Ahmadinejad’s speech turned worries to anger. The protests that began first, in and around the Bazaar, spread to other parts of Iran’s capital.

The prevailing situation is resultant of multiple factors, not the least of which are sanctions imposed by the US and EU sanctions against Iran’s oil and banking system.  These sanctions have afflicted Iran in two ways.

First, Iran’s oil revenue has slumped by half, around 1.1 million barrels per day, costing almost $48 billion in revenue loss this year. Second, what intensifies the situation is that Iran faces a huge hurdle bringing petrodollars home. Foreign banks are reluctant to conduct business with Iran, for fear of repercussions by the US government.

Until last year, Dubai-based Noor Islamic Bank was responsible for settling 60% of Iran’s $100 billion oil revenue, according to a Wall Street Journal report. In 2011, under pressure by the US, the Noor Islamic Bank stopped clearing Iran’s oil revenue. Since then, pressures on the rial have mounted. Mohsen Rezaii, Secretary of Iran’s Expediency Council, said on September 21, “They have made trade difficult for us. They don’t let us sell oil and when we sell oil, don’t let us get our money from the Chinese banks.”

But many Iranian economists, among them Saeed Leilaz, journalist and professor of Economics, and Dr. Mahammad Tabibian, university professor and former head of Iran Banking Institute, put more weight on the Ahmadinejad administration’s mismanagement as the cause of this current crisis. Tabibian believes that cash subsidies and the explosion of cash volume are to be blamed for the formation of this crisis, more so than the sanctions. “You want to give cash to seventy million people [every month] … no economy, not even the most powerful one, can tolerate such a pressure.”

The volume of cash under Ahmadinejad has been increased almost seven times since he came to office. This massive amount of cash is directed toward foreign currency and the gold market because Iranians no longer trust the government’s command on its own economy, nor the country’s stability as a whole. In other words, a psychological factor is playing a major role in motivating the people of Iran to exchange whatever cash they have for dollars or gold.

Professor Leilaz argues that the Ahmadinejad administration has not demonstrated its preparedness to confront emergency conditions caused by sanctions. He posits that the government is not disciplined and has wasted tremendous amounts of foreign currency. Last year alone, Iran’s government gave between $15 to $20 billion, at a subsidized rate, to those who travelled abroad according to Leilaz, whereas, “In 1998, Iran’s total revenue in foreign currencies did not reach $10 billion. In other words in 2011, we gave twice as much as Iran’s total foreign currency revenue in 1998 to the Iranians to go abroad…and 95 percent of the travels were for pleasure.”

Both economists firmly believe that there is no economic solution to the current situation. Contrarily, they both contend that the only solution lies in Iran’s political arena.

The voices demanding Ahmadinejad’s resignation, even in Iran’s parliament, resonate louder each day. Senior Iranian cleric, Grand Ayatollah Makarem, has warned the government of this unstable economic situation’s potential consequences. He said in an unprecedented tone that “there is a limit to what the people can put up with.” The Grand Ayatollah’s apprehension is justifiable. He realizes that if the economy gets tighter, social forces that challenge the authority of Iran’s theocratic system would be different in nature from those who shaped massive street protests in the 2009 disputed presidential election’s aftermath.

The backbone of that movement, the so-called Green Movement, was shaped by middle- and upper-class urbanites seeking social, and to some extent, political liberties – especially at the leadership level. Not a single economic demand was raised during and after the protests of the Green Movement. This time, the driving force of a protest movement could be the poor, who are prepared to fight for their survival. This would be a completely different movement with protests of different motivation, unless the crisis is addressed. Baztab Emrooz (today’s reflection), one of the most visited (but filtered by the government) political websites in Iran, warned the government to take action before it faces “the movement of the hungry.”

There is also a completely different view with regard to the protests. Some commentators in Iran, with whom the author of this article conversed, speculate that the most recent protests could be a contrivance by which Ahmadinejad’s opponents force him into resignation. This view may not be plausible, mainly because the situation is extremely volatile. People are angry and therefore, things may get out of control. Additionally, Ahmadinejad is a fighter and it would appear a quixotic notion to suggest that he would resign after a one-day protest. And if Ahmadinejad’s opponents stage more protests, the danger, again, is a loss of control in this situation.

This article is part of Insider & Insight

, a new AIC program aimed at providing different perspectives and analyses on key developments in US-Iran relations. The commentary and opinions expressed herein are solely those of the author and do not reflect the official position of American Iranian Council.