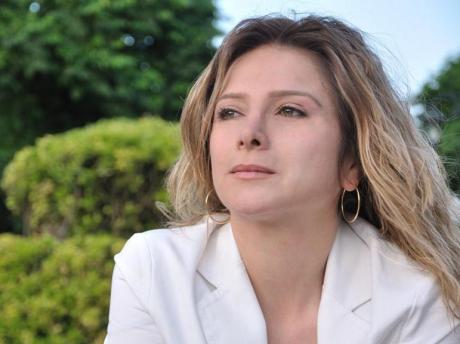 Syrian author is being recognised for her book A Woman In The Crossfire, which is based on diaries she kept during the early stages of the Syrian conflict. Exiled Syrian author Samar Yazbek is to share this year’s Pen Pinter literary prize with poet Carol Ann Duffy. (Source: persianrealm.com)

Below are two Conferences she gave recently on her released book.

The celebrated Syrian novelist presented her new book, A Woman in the Crossfire: Diaries of the Syrian Revolution, and engaged with the audience in a discussion on the reasons behind the Syrian crisis as well as her direct experience in the conflict. (Published on Sep 14, 2012 by ‪ipinst)

Diaries of the Syrian revolution with Samar Yazbek:

17/07/12 As killings continue and Syria’s future remains in the balance, we will be joined by Syrian novelist and journalist Samar Yazbek who will be in conversation with translator, writer and consultant Dr Peter Clark reflecting on her experience of the uprising and her hopes for her country.  In early 2011 Yazbek witnessed and participated in the first months of the Syrian uprising. Her vocal opposition to the regime published in print and online quickly attracted attention, and she was denounced by her family as vicious rumours spread about her disloyalty to the homeland and the Alawite community from which she comes.  Forced to live on the run, Yazbek was detained numerous times by the authorities but continued to document her personal reflections and the testimonies of figures in the Opposition.  Samar Yazbek is author of A Woman in the Crossfire: Diaries of the Syrian Revolution. She has published several novels and collections of short stories, the most recent of which is In Her Mirrors. An excerpt of her novel Cinnamon was published in the anthology Beirut 39.

(Published on Jul 18, 2012 by ‪FrontlineClubLondon)

Damascus is no longer itself

Getting the torture tour

Yazbek is being recognised for her book A Woman In The Crossfire, which is based on diaries she kept during the early stages of the Syrian conflict.

It details how her outspoken views against President Assad’s government led to persecution, and her decision to flee Syria with her young daughter.

Duffy, who is Poet Laureate, was named the winner of the main prize in July.

The annual award – in memory of the playwright Harold Pinter – is given to a British writer of outstanding literary merit.

The winner then chooses a recipient for the Writer Of Courage Award, which recognises an international writer who has been persecuted for speaking out about their beliefs.

Duffy was given a shortlist by the English Pen Writers At Risk Committee, and made her announcement at the British Library on Monday night.

Yazbek said: “I am grateful to English Pen, and to Carol Ann Duffy, for selecting this book, and through it, for supporting our cause.”

Lady Antonia Fraser, Harold Pinter’s widow, added: “Carol Ann Duffy’s recognition of Samar Yazbek’s courage in writing about Syria’s revolution from the inside could not come at a more appropriate time”.

Born in 1970, Yazbek comes from the same Alawite clan as President Bashar al-Assad.

Prior to the uprising, she wrote extensively on women’s issues in newspapers and journals, while challenging taboos in her novels.

Her second novel Salsal (Clay) cast a critical eye over the power of the military, while Cinnamon – which is due to be published in the UK next month – looks at the social divide in Syria through the prism of a servant who enters into a lesbian relationship with her employer.

When protests against the Syrian government began last March, she voiced her support online. She received hate mail, her family disowned her and, eventually, she was arrested and shown the cells she would be kept in, if she continued to support the rebels.

After further intimidation, she fled to Paris in July 2011 – although she has said: “I return all the time, but in secrecy. Undercover.”

Woman In The Crossfire tells the story of the first few months of the uprising, via her own story and testimony from ordinary Syrians.

The Spectator praised the book’s “uncompromising reportage from a doomed capital”, while the Washington Post said it “brought the cause of the opposition – and its raw human passion for liberation – into focus”.

The UN estimates that more than 20,000 people have died in the conflict in Syria, while hundreds of thousands more have fled over the country’s borders.

Tensions with neighbouring Turkey have escalated over the last week, after Syrian mortar rounds landed in the Turkish town of Akcakale, killing five.

A well-known novelist and journalist from the coastal city of Jableh, Samar Yazbek witnessed in person and actively participated in the first four months of the Syrian intifada. Throughout she kept a diary of personal reflections. Her outspoken views published in print, online, and on Facebook quickly attracted the attention and fury of the regime, as vicious rumors spread about her disloyalty to the homeland and the Alawite community from which she comes. This narrative weaves together her struggle to protect herself and her young daughter after she is forced to leave her home and live on the run, detained multiple times, and eventually flees to Europe.

Filled with exhilarating hope and horrifying atrocities, A Woman in the Crossfire offers us a wholly unique perspective on the Syrian uprising. Yazbek’s is a modest yet powerful testament to the strength and commitment of countless unnamed Syrians who dream of bringing an end to a forty-year-old dictatorship. Their fight for their dignity will inspire all those who read this book and challenge the world to look anew at the trials and tribulations of the Syrian uprising.

Samar Yazbek has published several novels and collections of short stories, the most recent of which is In Her Mirrors. An excerpt of her novel Cinnamon was published in the anthologyBeirut 39 (Bloomsbury, 2010) and will be published by Haus in 2013.

MASADA: Will The Battle For Aleppo Decide The Fate Of Assad ?


SCHINDLER’s LIST : In Tribute to the Abandoned Children of Syria