A simple question is thrown in the air and suddenly, like a fast-forwarded film, my entire life flashes past me. “What does walking home mean to you?” a friend has asked and for more than a day, the question has not left me. In her eloquent style, my friend writes her own impression of the ambiguous path we call life, the meaning of the word ‘home’ and all the fears and concerns entailed in such a journey, she draws a vivid sketch of the salmons that are doomed to be dinner for the bears, the serpents hiding along the way, and ponders about the uncertainty of survival. I wonder if, having lived only in the free world, it isn’t her writer’s imagination that helps her to understand such fear.

Her article reflects on a trip through Alaska’s wilderness. She observes the bear track in the forest near a creek where she finds a few weak salmon, “hell-bent on their aquatic version of Walking Home.” And finding a “serpentine path leading into the forest beyond,” fills her with anxiety over what could follow. The image takes me across the globe, to a beautiful path I used to know and to a people, who are not too different from those salmons. My mind goes to the millions of people around the world, whose mere existence is nothing but a means of survival for the strong. Having left the creek of doomed salmons four decades ago, my knowledge of the unease of those I left behind is second hand at best, yet I do feel their pain.

Most people view immigration in the same way as a big move. To them, leaving your country is a more dramatized version of leaving the state in which you were born and raised. But only the immigrants know what the process entails: You give up your family, your friends, language, culture and much of your worldly possessions in exchange for a chance at a future. In doing this, you also learn not to compare your situation to those who enjoy the same without making sacrifices. And so it is that some words change meanings – if not losing it entirely. One such word is ‘home.’ So as I try to respond, even before I pick up my pen, the question has rearranged itself in my mind, “If your home is no longer home, what does walking home mean to you?”

Expressive and powerful as my friend’s article is, it doesn’t take me to Alaska. Instead, I am back to the end of a school day in Mashad, walking on Golestan Avenue toward the National Garden, behind which my father’s home is. Where my friend finds the salmon creek, I am at the pond in Vakeel-Abad, watching my two teen-age brothers dive in and I hear them scream as their skin touches the ice-cold water.  When she sees the serpentine path, I see dark holes in the ground and hear grownups say, “That must be a snake hole!” Forty years of life in another world has not touched those memories and though I think I am finally home, I know that home as I used to know has vanished for good. The country and the city exist, but the bitter reality is that the place ceased to be home to me all those decades ago. 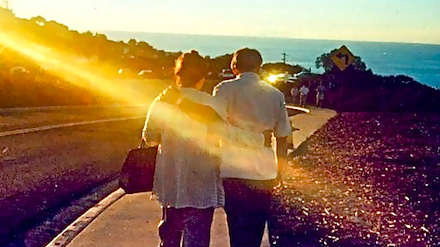 This is not to deny the beauty in adopting a new country as your home. Immigration is man’s art of survival. Like the victims of wildfire, you rise from the ashes of a bygone home, start to rebuild, and ultimately create a new place you can call home. You raise your family and try to find happiness away from everyone who knew you, and if for some reason, you end up burning bridges, you try to tell yourself, “It would do no good, anyway!” Then comes a day when you realize how ‘home’ has become a much smaller word. It refers to a place you pay mortgage on. It refers to a door that bursts open with the sound of giggling children back from school. It is the kitchen where you cook, the warm four walls wherein you sleep, and a small garden where you plant flowers and grow tomatoes. Years go by and you adjust, until you come across a creek where a few doomed salmon live their last days and you, too, try to convince yourself that, “these perseverant creatures are merely playing their own small role in the intricate web of life …”

I lean on the man who has been my mountain of strength and as we walk home, I try to remember how blessed we are. It could have been better, but still, it’s wonderful to have built a home to walk to.

PrevPreviousMy House Has Many Rooms
NextMalala Yousafzai is an inspiration, a ray of hope in our darkening worldNext