Does Iran Have An Ana Mladic? 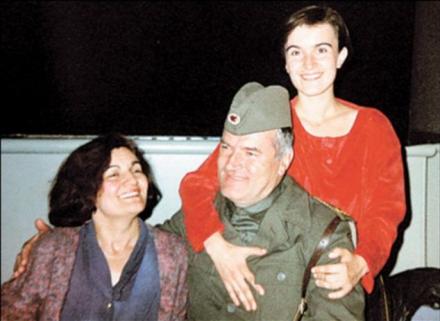 Ratko Mladic aka “The Butcher of Bosnia” was the Yugoslav National Army General responsible for the 1992-1995 siege of Sarajevo, a highlight in the annals of human brutality where his snipers gleefully picked off civilians, including children and the elderly, anybody slow enough to get shot in a 4 year horror fest that cost 10 000 lives and an entire generation of Bosnia and Herzegovina’s unsuspecting youth.

Barreling through Bosnia, Mladic and his henchmen left its families without fathers, mothers, sons and daughters while his family were in Belgrade, safely ensconced in a bubble of peace and propaganda. In 1994, for Ana Mladic, the then 23 year old general’s daughter, the bubble burst. Her body was found in a Belgrade park, along with the general’s favourite pistol, the one he was awarded at his graduation from the military academy. Amidst the rumours and explanations offered, reports mounted that Ana Mladic, having read the truth about her father’s Bosnian “activities”, killed herself.

Protesting evil has levels, grades of sacrifice in an acute progression where the ultimate protest is life, a life that is not just yours but belongs to those who love you, those who raised you, those who gave you that life and saw their lives in yours. A life sacrificed in protest though belongs to everybody and anybody empowered by the message of your bravery. Ana Mladic’s death was the one act that gave Mladic the bitter taste of the medicine he had been administering to thousands of innocents in a war of his making, something one hundred Hague Tribunals could never do.

Today marks the 14th day of human rights activist Nasrin Sotoudeh’s hunger strike. Imprisoned for speaking out against the illegal execution of her client, a sixteen year old boy, on hunger strike protesting the inhumane treatment of prisoners in Evin Prison, she is offering the ultimate sacrifice for freedom from a regime of butchers, this time of Iranian nationality. While her 12 year old daughter and 8 year old son wait and wonder if the mother they’ve only been able to visit in jail for the last 2 years will live another day, the Iranian butchers seem immovable.

Mladic’s one request before his transfer to the Hague to stand trial for war crimes, crimes against humanity and genocide was to visit the grave of his daughter. The Islamic Republic’s supreme leader, Ali Khamenei, father of six, Mahmoud Ahmadinejad, President and father of three as well as Tehran’s Chief Prosecutor Abbas Jafari Dolatabadi should do well to remember the lessons of the Bosnian war and its head butcher, General Ratko Mladic whose knives turned against him, cutting him the deepest when he least expected.