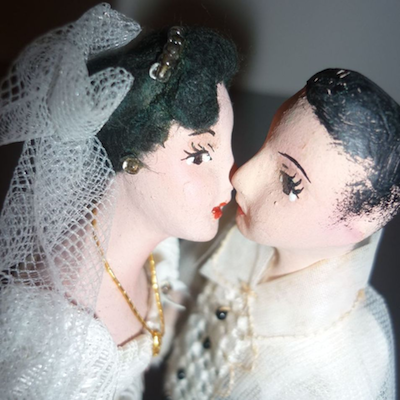 Zari Jan was 36 and not yet married. Her younger brother left for the West to study and she was finally free as a bird. She proposed first, to Agha Farzin, the sandwich guy, then to Ahmad Agha – the fruit seller in the neighborhood.
From morning to dusk, Zari Jan would stand by the bridal shop in the town square and stare so hard you could just cry.

Finally a family meeting was called. Her old mother begged all her children to find a solution. She said: Zari is making her father’s bones tremble in the grave a thousand times a day. Farhad – the older brother said a fake husband should be found so they can have a wedding for Zari. Maybe that will calm her down.

Abbas, one of Farhad’s employees at the workshop agreed to marry Zari Jan.

A grand ceremony was organized and Zari formally became a bride. The day after the wedding Zari Jan put on her wedding dress and convinced Abbas Agha to also wear his suit and they sat at the wedding alter once more. Again they fed each other honey and exchanged rings.

During the following month, Zari Jan played the Bride and Groom game 27 times. Abbas Agha complained to Agha Farhad. Again a family meeting was called. It was decided that Abbas Agha should die in a staged accident and Zari Jan should become a widow. Abbas Agha died and everyone, including Zari Jan wore black and mourned. Zari Jan wore black for 40 days. On the 41st day, she proposed first to Agha Farzin the sandwich guy, then to Ahmad Agha the fruit seller.

….She missed playing the bride and groom game.