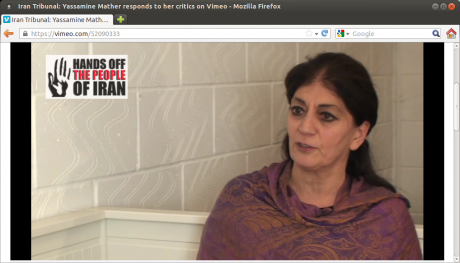 Hands Off the People of Iran has been criticising the “Iran Tribunal” for its pro-imperialist agenda and links to funds that campaign for “regime change from above”, like the National Endowment for Democracy (NED). In this video, Yassamine Mather responds to some criticisms leveled against Hopi.

Israeli socialist and found of Matzpen, Moshé Machover, believes that some of the organisers and participants have “acted with evident good will, but that is not enough. It often happens that people of good intentions lend themselves out of naivety to be exploited by evil forces. This is a danger that we must always guard against. Many good people, out of genuine and justified concern for women’s rights, were duped into lending legitimacy to the invasion of Afghanistan in 2001; and similarly good people, with genuine horror of Saddam Husain’s atrocities, were duped in 2003 into lending legitimacy to the disastrous invasion of Iraq.”

Norman Paech, human rights lawyer and member of Die Linke in Germany: “I have indeed supported the intention and the work of the committee to prepare this tribunal. I still think it is absolutely necessary that all facts about the horrific murders, the torture and the crimes of the 1980s are brought to light. But the background of the funding and the obvious links to the NED, of which I had no knowledge and which have only just been brought to my attention, make it impossible for me to continue this support. I find myself in particularly strong disagreement with the committee when it comes to my resolute opposition to sanctions and the threat of war on Iran. I do not want to be part of a project which is supported by the pro-war Mujahedin.”

John McDonnell MP: This tardy interest in “human rights” in Iran is clearly part of the US, Israeli and British governments’ drive to topple the theocratic regime – just like military threats and the vicious sanctions on the country, which are bleeding ordinary Iranians dry: food prices have rocketed, many workers have to be laid off as contracts with foreign companies are cancelled, hospitals cannot get hold of necessary and life-saving equipment. In this context, the refusal of IT’s steering committee to take a stand against the looming war and the calamitous effects of sanctions is a significant silence.

Mark Fischer, national secretary of Hands Off the People of Iran: “Financially and politically the tribunal is an integral part of the campaign for ‘regime change from above’. This multi-front campaign utilises bombs, military threats, sanctions, killer commandos despatched by the Israeli secret service Mossad … and ‘human rights’ initiatives like the Iran Tribunal. For the sake of legitimacy – especially when it comes to ‘soft war’ initiatives like the IT or sanctions – the support of pliant politicians of the Iranian opposition is vital in this. Indeed, some of these forces have foolishly suggested that the worse the social conditions become in Iran, the weaker the regime.”

Mohammad Reza Shalgouni, a founder-member of Rahe Kargar, who spent eight years in prison under the shah: “It is inconceivable that a genuine tribunal of victims of the 1988 massacre would be associated with individuals or organisations who have such connections to the United States government.”

Professor Bridget Fowler, Glasgow University: I have read your very disturbing articles and support your anxiety about some of the funders to the Iran Tribunal, including – via the Abdorrahman Borroumand Foundation – the National Endowment for Democracy. I came to learn about the NED through discovering that it was one of the many organisations that had tried to destabilise the present Cuban Govt, so as to reinstate a regime which would back full privatisation as well as pursuing neoliberal demands.

Michael Parenti, US Marxist academic: Anti-imperialists and socialists should not take monetary or promotional support from organizations that are funded and directed by the imperialists. The NED and other such imperial interests are happy to undermine us with dollars as well as with brutal assaults. Never do they give anything that does not have strings attached to it. The imperialists have only their own self-interest in mind. The nectar they offer us is laced with poison. Build your own organizations as best you can, free from the infiltrations and subversion of those who preach democracy but who practice fascism.

Ruben Markarian, a leading member of Rahe Kargar: “The reality is that families of political prisoners who were seeking justice for their relatives have been delivered to the US and its allies.”

Professor Cyrus Bina, University of Minnesota: This so-called Tribunal is indeed a bashful front of US neocons and the Israel lobby in United States. Let’s not kid ourselves by walking on the eggshells on this and when it comes to Mr. Payam Akhavan.

Ashraf Dehghani, a prominent member of the Iranian People’s Fedayeen Guerrillas, has also come out strongly in opposition to the tribunal. “These days, we see that various imperialist powers are concerned about the issue ‘human rights’ and the defense of this or that political prisoner in Iran. One example of such concern by imperialist forces is the so called Iran Tribunal held recently in London.”

Ervand Abrahamian, historian of Middle Eastern and particularly Iranian history: I think this is not a good time to focus on the prison massacres. A better time will come once the nuclear issue subsides. Incidentally, Moussavi had absolutely nothing to do with the killings. There is a vital need to differentiate between different sectors of the regime.

Articles from all over the world, criticising the tribunal and its organisers: