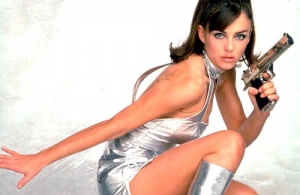 “Women are not only just as capable in what I call secret warfare, they actually have a great advantage”  Mossad Director Tamir Pardo.

It has been said that, promise a man a night of wild debauchery and you see that he’ll sing like a canary alright as their understanding of the territory and spatial awareness controls what’s in their pants. Of course, this does not apply to all men. There is always an exception to the rules.

It seems that one must do anything for one’s country even if that means sleeping with the enemy.  You may think what this world has come to or you may ask what about the morality?… What about the religion?

As I am fascinated with Rabbis as much as I am with the Mullas, I found myself with no choice but to dig further into the Mussad’s weapons of mass seduction.  All thanks to the the latest event and Ayatoilet’s blog.

To my surprise, almost in no time, I came across an article in the Israel Star Chronicle mentioning about the inquiry done by the intersection of religion and modernity of the Zomet Institute. The institute studied whether it is acceptable for female agents of Israel’s foreign secret service to have sex with the enemy in certain missions known as honeytrap.

The study was called  ” Illicit Sex for the Sake of National Security ”.  After collecting, analyzing, digesting , and pooping the data , the Grand Rabboallah Schvat gave the following ” Fatwa ” published in Haaretz.com,

“Honeytrap missions are not just a thing of modern-day espionage. They have Biblical root. Queen Esther, who was Jewish, slept with the Persian king Ahasuerus  around 500 BC to save her people.  ……  If it is necessary to use a married woman, it would be best for her husband to divorce her. After the sex act, he would be entitled to bring her back. Naturally, a job of that sort could be given to a woman who in any event is licentious in her ways”