Negotiating with the IR Regime 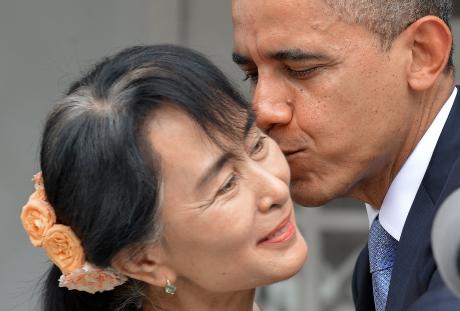 In recent weeks, the IR Regime has been sending signals through various channels that it is ready and willing for one-on-one negotiations with the newly-reelected Obama administration. But, are they really willing to turn the page and open a new chapter in their relationship with the west, or as usual, there is something else at work here?

In order to answer the question, I looked into the answers for two other related questions. First, is the IR Regime really capable of sitting down with an adversary and negotiate in good faith? And second, have the US and the Regime ever successfully negotiated before and what were the circumstances?

The ruling Regime in Iran has several territorial as well as commercial disputes with a majority of its neighbors. These disputes cover everything from the percentage of ownership in the Caspian Sea and oil and gas exploration rights there, exact border markings with Iraq and Afghanistan, the three Persian Gulf Islands ownership with UAE and, shared oil and gas resources with Qatar and UAE.

In almost all these disputes, there is never a sustained attempt at negotiations and generally things are left for another day and for unilateral action. In the case of the border disputes, the parties put up a border post in the middle of the night to create “facts on the ground” and the other party finds out about it and tries to destroy it.

All in all, the IR Regime negotiates either in a master or a slave mode. In the case of Russians and the nuclear plant in Bushehr or the cancelled S-300 missile defense system, the Regime accepts what the Russians send their way. The same is also true with the Chinese. But when it comes to Iraq, Afghanistan, Lebanon, Venezuela or Tajikistan, etc., the Regime throws a lot of free gifts on the table and tries to get its way.

So at the end, the IR Regime doesn’t really know how to negotiate as an equal partner, but instead it either gets its way or completely succumbs to the other party’s wishes or leaves the disputes unresolved for another day when it could be stronger to completely get its way.

Now to find the answer to the second question regarding the history of successful negotiations between the US and the IR Regime, there is only one instance that the two parties actually came to an agreement, and that is the ending of the American hostage crisis.

Back in the fall of 1980 and after months of demands and counter demands the two parties agreed to a set of points and the American hostages were released. Here are some of the circumstances that drove the final decision.

1.    The late Shah had already passed away in the early summer of 1980, therefore the key demand of the hostage takers that was the return of the Shah to stand trial was no longer available.

2.    The hostage crisis had already served its useful purpose for Khomeini to purge its government of more moderate elements and had become a source of embarrassment and negative publicity for the Regime.

3.    A hostage rescue operation had failed miserably and the hostages were spread everywhere, therefore the US had no other alternative but to negotiate for their release.

4.    Ronald Reagan had been elected as the new US President and had promised to take a strong stand against the hostage takers.

All in all, Khomeini and the US were forced to sign an agreement that resolved a narrow issue, but left the larger issue of bi-lateral relationship unresolved. That ensured that as soon as the opportunity presented itself either party resumed its hostilities towards the other; the US by supporting Saddam in the Iran-Iraq war, and the IR Regime by many acts of terrorism in Lebanon, Saudi Arabia, Iraq, etc. and the taking of more hostages even to this day, such as several Iranian-Americans.

Now if one looks at the narrow issue of the enrichment, one can see some similarities to the hostage crisis issue. The stock piles of enriched material have served their useful purpose for the Regime and they are now regarded as a costly mistake, unless the Regime is seriously considering a weapons program. A military option to destroy / rescue (!) the centrifuges seems difficult and not a long term answer. The sanctions and the freezing of the assets are hurting the Regime, but may or may not cause the Regime to implode. So can the US and the Regime sit down and negotiate over the narrow issue of the enrichment in exchange for some sanction relief? The answer is that, they probably can.

But as we saw back in the early 80’s, the successful negotiations over a narrow issue with a Regime that at its core is opposed to the other side will not resolve the larger issues and we will live to fight this another day.

PrevPreviousEricsson hunting down Iranians
NextI am sorry, but we may be dead.Next