A new wave of dust storms has hit the cities of Ahwaz in the south and south west of the country, a phenomenon to which the Ahwazi people have become accustomed. Dust storms have become commonplace throughout the Ahwaz region.

According to the IRNA news agency, hospitals and health centers in Ahwaz capital received more than 300 cases of individuals suffering from suffocation on Wednesday, the 22nd of November alone. It added that some were in serious conditions, as pollution yesterday was 58 times higher than the global levels.

According to IRNA, there are myriad of reasons behind the deteriorating health conditions for people in Ahwaz including desertification of large swaths of land, deliberate transfer of water by changing rivers’ courses, burning sugar farms during harvest season, the prevalence of oil wells, and the burning of garbage.

There was no such a thing as dust storms in Ahwaz until only a few years ago. The phenomenon began due to megaprojects carried out by the Iranian regime in the region.

These projects included the establishment of throughout dams in coordination with the regime’s plans to transfer water to Persian-majority areas. These plans caused marshes across Ahwaz to dry up. 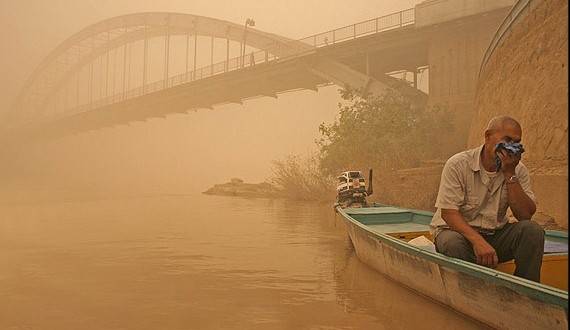 The world environment watchdogs and activists have warned of the deteriorated situation in Ahwaz. But the Iranian regime has insisted upon turning a deaf ear to these calls.

The environmental pollution has alarmingly risen the rate of cancer, respiratory and skin diseases among Ahwazi Arab people in recent years.

The Ahwazi people’s calls for the dust storms to be addressed have gone unheeded. In recent months thousands of Ahwazis demonstrated in front of the governorate building to protest the Iranian authorities’ neglect of the wave of dust storms that have swept the region relentlessly. Hundreds of citizens have been hospitalized as a result of the storms, and work has been suspended for four days.

The demonstrators shouted denunciations of the governor and environmental officials and condemned the government’s negligence. Iranian president Hassan Rouhani and his administration are ignoring the environmental disaster caused by the rise of pollutant dust particles and the wave of dust that has paralyzed the lives of citizens, even causing continuous Power outages and traffic accidents in which dozens have died or been injured. Activists across social networks posted clips and pictures of protests, in which citizens expressed dissatisfaction and anger at the Iranian government’s policies towards the region, the lack of the steps urgently needed, and radical solutions to curb the rising tide of pollution that has worsened in recent years. The protesters also criticized the government’s construction of many dams and several channels to transfer water of Karoon, the region’s largest river in Ahwaz, to the central Iranian provinces of Isfahan, Yazd, and Qom, resulting in more desertification, drought and agricultural scarcity in the region. The authorities say that these storms are caused by the dust waves coming from Arab countries for years. Ahwazi activists counter that this crisis was exacerbated by the construction of dams on the rivers “Karoon” and “Karkheh” and the consequent drying up of wetlands.

These footages show the lifestyle of Ahwazi Arabs of Falahiyeh city in Ahwaz. While the state of poverty is apparent, people at least were making a living by selling locally caught fish, handmade dairy products, and many kinds of produce grown in areas adjacent to the nearby marshlands, which were once bountiful. Some of the handicrafts seen (such as baskets, hand-painted fans, rugs, etc.) were also made by residents from the leaves of locally grown palm trees.

Alas, three decades later, those date palms and other crops have disappeared, along with most of the marshlands themselves. Having already plundered and destroyed large parts of the Ahwazi Arab peoples’ lands for oil and gas (as over 95% of the oil and gas reserves in Iran are on Ahwazi land), the regime then decided to prospect for oil in the marshlands themselves. This wrecked and poisoned the habitat in an area of natural beauty and left the already poor people, who had farmed their land there for countless generations and had no other means of making a living, with nothing.

Speaking on condition of anonymity, an Ahwazi rights activist from Ahwaz said, “the suffering of Ahwazis has become multifaceted since our people are facing the woes of poverty due discriminatory employment practices instituted by the Iranian regime, land confiscation, building of Persian settlements for changing the demographic composition in favor of none-Arab newcomers, and now we are facing a very dangerous dust storms manufactured by the regime, directly related to the commencement of oil companies prospecting in Ahwazi wetlands, and after the discovery of oil they initiated the deliberate drying out the wetlands to expand their prospecting operations, as a result the Ahwazi wetlands has become the source of dust storms, which is salt in the wound for all Ahwazi young people; which oil companies won’t employ any Ahwazi Arab that is why Ahwaz is witnessing very scary levels of suicide cases due to poverty, and hopelessness for their future.” He added, “Despite billions of dollars’ worth of oil and gas being extracted in the region annually, the indigenous Ahwazi Arab people see none of this wealth and therefore live in grinding, subsistence-level poverty”. He stressed, “The destruction of the marshlands means now that even more of the people in Falahiyeh and the surrounding area have now been dispossessed and left destitute. Pollution from the oil and gas drilling is poisoning the air and water – making life even more intolerable”. He concluded, “On every occasion in which a dust storm blows, officials come out making remarks whose momentum quickly winds away. The matter requires radical solution such as equitable distribution of water shares and short and long-run programs to tackle the sand dunes spilling over towards Ahwazi cities”.