I have been saying all year that the 8chan phenomenon known as “QAnon” is bogus, and as time has gone on the evidence has become overwhelming that it is an establishment psyop designed to herd the populist right into accepting the narratives and agendas of the establishment orthodoxy. Whether they’re claiming that every capitulation the Trump administration makes to longstanding neoconservative agendas is actually brilliant 4-D chess strategy, or saying that Julian Assange isn’t really trapped in the Ecuadorian embassy, QAnon enthusiasts are constantly regurgitating talking points which just so happen to fit in very conveniently with the interests of America’s defense and intelligence agencies.

A recent “Q drop” (a fancy name for an anonymous user posting text onto a popular internet troll message board with zero accountability) makes this more abundantly clear than ever, with text reading as follows:

Free Iran!!!
Fight
Fight
Fight
Regime change.
People have the power.
We stand with you.
Q 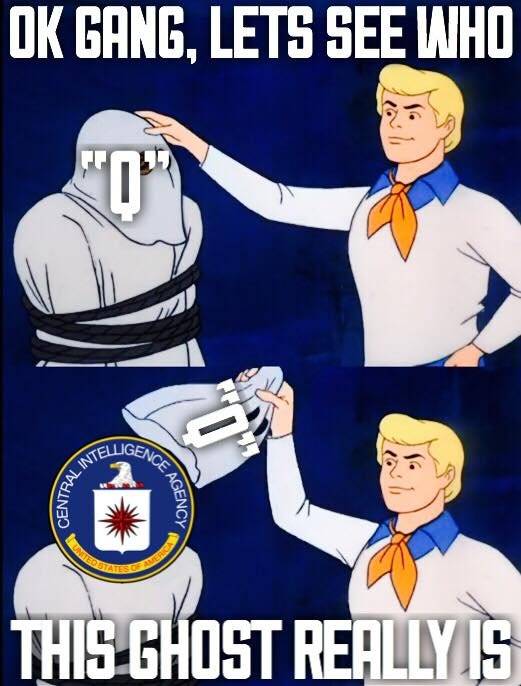 So now you have conspiracy-minded populist right wingers being manipulated into supporting the same standard Bush administration globalist agendas that Alex Jones built his career on attacking. The support for regime change interventionism in Iran isn’t limited to the QAnon crowd, having now gone fully mainstream throughout Trump’s base, and I’d like to address a few of the arguments here that they have been bringing to me:

Iran is nowhere near the same thing as Iraq, Libya or Syria!

Please go look at a globe and think a little harder about your position here. Iran is a target for regime change for the exact same reasons its neighbors Iraq and Syria have been; it occupies and extremely strategically significant location in an oil-rich region that the US-centralized empire wants full control of. Thinking this one is different because its government isn’t secular is the product of many years of Islamophobic propaganda; the plutocrats and their allied intelligence and defense agencies don’t care what religion sits on top of their oil, and Saudi Arabia proves it. Any argument made against Iranian theocracy could be made even more strongly against KSA theocracy, but you don’t see Sean Hannity advocating the overthrow of the Saudi royals, do you?

But this regime change intervention would be completely different!

This is different, though! This one is led by Trump! Look at all that he’s accomplished in North Korea!

1. All that Trump has done with North Korea is take the very first step in the most rudimentary beginnings of peace talks. I fully support him in taking that step, but you can’t legitimately treat it as an “accomplishment” which proves that he is a strategic genius capable of facilitating the impossible task of non-disastrous regime change in Iran.

3. Neocons are always wrong about foreign policy. Always. There’s no reason to believe Trump spearheading a longstanding neocon agenda would work out any better than Bush or any other neocon.

Well what about the Iranians in Iran who want regime change?

What about them? The fact that some Iranians want their government changed has nothing to do with you or your government. The Fox News and Washington Post pundits who keep pointing out the fact that Iran, like America, contains people who are unhappy with its current system of government are only ever trying to galvanize the west against Tehran. There’s no good reason for you to be acting as a pro bono CIA propagandist running around telling westerners how great it would be if the Mullahs were gone.

Well I don’t want the US to intervene, I just want the Iranians to free themselves!

1. This administration is already currently engaged in regime change interventionism in Iran in the form of escalated CIA covert operations and harsh economic sanctions, and its involvement with Iranian terror cult MEK suggests it may run far deeper than that in a similar way to US involvement with extremist groups in Syria, Libya and Ukraine.

2. Why say anything, then? Ever stop to ask yourself why you’re always cheering for Iranians to overthrow their government? Why constantly cheerlead for something which requires zero western involvement? Whom does that help? Do you think Iranians don’t already know that America hates their government?

All you’re doing is helping to signal boost the pro-regime change propaganda that US defense and intelligence agencies have been seeding into American public consciousness for many years. Your “Yay, free Iran!” sentiments aren’t helping Iranians, they’re helping the western propagandists target western audiences. You’re just helping the public get more okay with any actions taken against the Iranian government, in exactly the same way Russiagaters help manufacture support for escalations against Russia.

Come on, people. Think harder. This one isn’t difficult. It’s not a random coincidence that you’re all being paced into supporting regime change in the final target named seventeen years ago in General Wesley Clark’s famous “seven countries in five years” list of neocon regime change agendas. The only thing that has changed is the face on the agenda.

Iran is not different from the other regime change targets of Iraq, Libya or Syria. Barack Obama served George W Bush’s third and fourth terms, and Donald Trump is serving his fifth. They were strong-armed in different ways by America’s unelected power establishment into advancing different regime change agendas depending on where their political support came from and public sentiment at the time, but it’s all been pointed at the exact same region for the exact same reasons.

Leave Iran alone. Leave the Iranian people alone. There is no legitimate reason for you to be cheering for regime change in Iran, and anyone who tells you otherwise is an evil piece of shit. Reject them.