Is US Immigration Still A National Asset Or A Heartland Liability?

Give me your tired, your poor, your huddled masses yearning to breathe free,
the wretched refuse of your teeming shore. Send these, the homeless,
tempest-tossed to me, I lift my lamp beside the golden door!

Whereas the Americans should periodically debate any policies including immigration in a democratic ambiance so as to enact revised statutes if genuinely meritorious to strengthen the nation as whole, nonetheless, the ever intensifying sloganeering and rhetoric trumpeted by the US administration on “immigration reform,” has adversely impacted the daily lives of tens of millions of Naturalized American families in that they find themselves caught between a rock, i.e., the US their adopted nation, and a hard place, their country of birth.

The western hemisphere-in modern era called The Americas – on which the United States was founded 250 years ago, has and continues to be the opportunity bastion and a beacon of hope and prosperity for, and reciprocity by immigrant aspirants worldwide. Human habitation of this richest land with vas natural resources on earth began with the Asiatic peoples, i.e., today’s quasi-perished and near extinct natives, who crossed the Bering Sea 15-20 thousand years ago. The settlement of these first Asian immigrants later named Native Americans, was followed in the first millennium – albeit in small cohorts and for only brief periods- by the arrival of the Africans, even the Persians (Scythians/Sakas), and the Nordic Vikings.

The Europeans in massive droves, triggered by Christopher Columbus’ [mistaken] navigation to the western hemisphere, arrived over the past five hundred years. The resilience of the Puritans, the persecuted and the pioneers at the frontiers, especially when combined with the more educated and affluent south/west Asian immigrants of the past few decades and topped off with an affinity for a just, secular and democratic society, has made the US the utopic Promised Land on earth. In fact, US leadership was reinforced with triumph in WWII, thereby paving the path for its global economic, military, and political post-neo-colonial dominance.

So, it does humanity a disservice when a White House resident whose own grandparents were foreign born from Scotland and Germany, and whose wives were also foreign born from Slovenia and the Czech Republic, trumpets up the 39% white populists of the heartland against naturalized and recently arrived immigrants. In so doing, he and his gullible fans not only resort to ludicrous audacity in questioning immigration policies through intimidation and humiliation of immigrants, but they also question the loyalty of recent immigrants and their equal opportunity rights under the law. His so-called “merit based immigration reforms” has and continues to undermine the daily lives of millions of naturalized Americans including those who arrived from the “travel ban” countries based on the strictest “merit” policy.

Consequently, Trumpism have regressed the whole Nation one giant step backward, thereby weakening or eradicating the very pillars of US national security: equality and equal opportunity, civil and constitutional rights, and human freedoms and dignity. History will ultimately demonstrate who was more of a risk to our national security: the Iranian grandmother longing to visit her US born American grandchildren for the first time before her life ends, or the current White House occupant walking along a dangerous line of treason and treachery to practically sell off American security and ethical values to a Russian Czar and yield nothing for our nation in return.

According to Pew Research, the population of foreign-born Americans has increased fourfold from 10 million in 1960 to an all-time high of 45 million in 2018. When one includes the US born offspring of such naturalized immigrants of the past 60 years, the tally is fast approaching 80 million, i.e., one-fourth of the entire US population. These offspring are often closely aligned with their parents’ family values, perspectives, and political inclinations. For the same sixty year period, the total US population has increased from 187 to 327 million.

Historians, demographers and policy makers credit the rapid exponential US economic growth and global solo domination to the vibrancy and hard work of migrants, whether they are picking vegetables in the sunburst valleys of California or conceiving, founding and seeding most if not all of our Fortune 500 global corporations. Regardless, year after year data compiled by the government and independent think tanks support the fact that immigrants’ crime rates and social welfare benefits are far below those of non-immigrants, and their education and contributions toward national GDP are many folds higher. One is, hence, hard pressed to find a single university, corporation, government sectors, R&D centers, etc. where the eminent presence and seminal contributions of immigrants especially those from Japan of the east and Indians and Iranians to the west, cannot be strongly noted.

Ironically in retrospect, had the west-the US as the leader of the pact-along with repressive reactionary regimes, not meddled in the internal affairs of the south-west Asian countries through overt/covert military interventions or sanctions, we neither had such massive brain drains nor did we have the millions of refugees. The melancholic yearning in the region is what exactly happened to the mutual Iranian-Americans friendship that has been deeply rooted for 200 years. 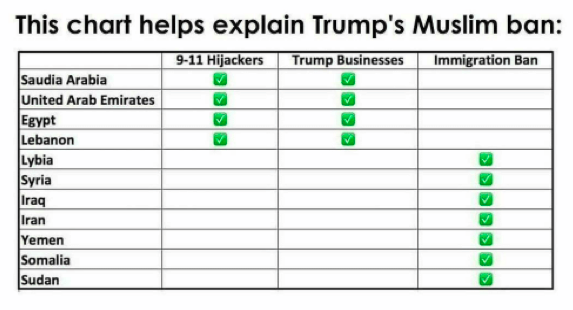 However, what has become most concerning is the resurgence of conservative, megalomaniacal isolationist rhetoric trumping self-indulging ideologies and demagogueries. There is a fundamental paradigm shift in the predominantly blue collar descendants of European immigrants who arrived through the mid-20th century. Some now feel they are the sole proprietors of this country and its vast resources. This is in contrast to the majority of Latin American and Caribbean Island immigrants, and highly educated and affluent South/West Asians [including a million emigres from Iran] arriving in the past few decades.

Whereas the majority of northern European immigrants in the Americas constitute blue collar workers who aspired to provide better educational and socio-economic opportunities for their children, the ones arriving from south/west Asia, fleeing religious imposition or persecution, socio-political repressions, or civil wars, mostly came with college degrees and/or substantial capitals for investment. Two countries, namely Iran and India, stand out with advanced education for the two million Indians, and education and affluence for the one million Iranians (Persians) who came here. When an adult immigrant arrives from this region, it has cost his or her native country a million dollars to raise, nurture and educate him or her to graduate from college. This is an immediate transfer of capital give-away, i.e., brain drain, a value-added asset for US economic development. Simply put, these immigrants arrive with high aspirations and strong work ethics, many with prior capital and advanced education, thereby fulfilling the American dream for their families, but far more importantly, contributing at an unprecedented rate to generation and expansion of our national GDP. In the case of Indians and Iranians, their expectations of any entitlement from their adopted land is statistically meniscus, if any.

The current travel ban to block Iranians in particular, from visiting their American families here, when complemented by intensified IRI repressive measures against American dual nationals to visit their relatives in Iran, has made it all but impossible for any humanistic exchanges. The same blanket discrimination has not been applied to Saudi Arabians/UAE whose government is the major financial sponsor of Wahhabi/Salafi religious ideology which has led to human casualties in the tens of millions and economic catastrophes in the trillions of dollars, all inflicted by Saudi-led Al-Qaeda, Taliban, Al-Shabbos, and ISIS. The result has wreaked havoc in Afghanistan, Iraq, Libya, Syria, Yemen and who knows what’s more in the pipeline for the region.

For the US alone, the cited atrocities and the despicable September 11 terrorist acts has thus far cost thousands dead, millions maimed, and trillions of dollars wasted. In fact, if the US and its so-called allies were genuinely interested in slowing down the refugee and immigrant flows, they would for the first time ever, apply blind justice and universal human rights and allow socio-economic and political progress to take shape in such smaller countries so as to allow secular and democratic systems take hold. That in and of itself would take away the need for American support of unpopular and undemocratic puppets, while preventing protracted military interventions like those in Syria, Yemen, Libya, Afghanistan or Iraq. A progressive level of mutually beneficial socio-economic development would also dramatically reduce the refugee flows from Southwest Asia and the North Africa corridor by millions.

Finally, if all the above historical reasons are not yet convincing that a sound and non-divisive comprehensive immigration policy (family reparation, humanitarian, and merit based) should remain at the heart of American ideals of equality, equal opportunity, and competitiveness worldwide, allow me to share my own personal family story, which is not an isolated story but rather mirrors the terms of endearment of millions of other immigrants over the past few decades:

My spouse and I arrived from Iran with several advanced university degrees and wealth. We furthered our post-graduate studies and after earning (post-) doctoral degrees became university professors, community servants, and civic leaders. We earned our permanent residencies and subsequent naturalizations to full citizenship through the most rigorous “merit based” scrutiny by the US government labor department to rightly ensure we were not taking opportunities fillable by born Americans. If the same arduous and costly qualification process were to be applied to the US population-at-large so they had to re-earn their citizenship rather than being entitled to it by birth, it might block the majority behind our borders as inadmissible refugees! Our three US-born now adult children have five advanced degrees all together: PHD or MD, plus bachelor’s degrees. None of us has even been cited for more than a driving violation, if even that. This family has and continues to pour various taxes to the Treasury in the amount of nearly a million dollars per year. In addition, we each give gratis our services for a few hundred hours per annum to our adopted nation. 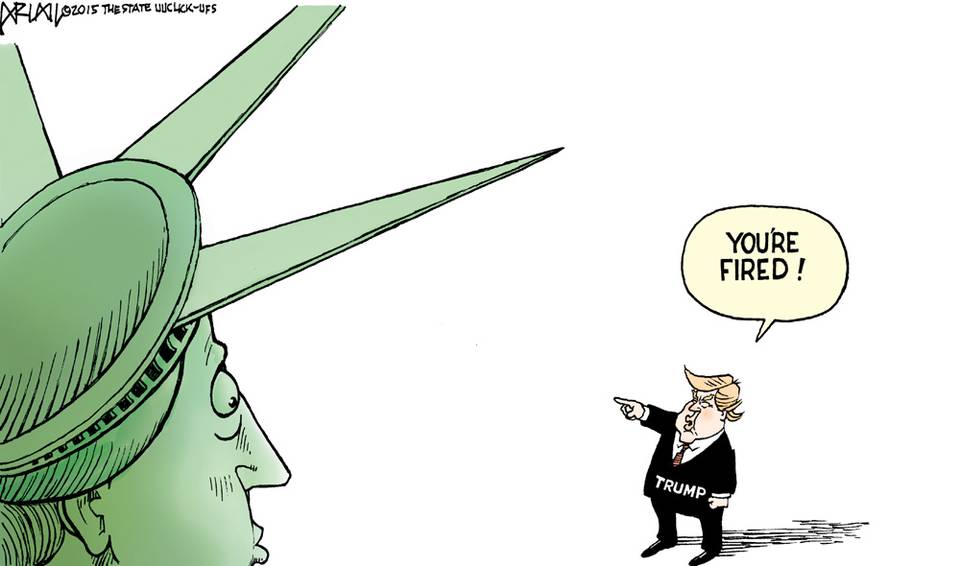 Now the government has made it practically impossible for us visit our families in our birthplace nor can our family members be considered to secure visas to visit us here. Put simply, based on what logical or (ir-) rational and reactionary explanation can anyone deny US Citizens their human and constitutional rights of hosting primary family members in their home? And rhetorically speaking, as the process of immigration been politicized and exploited, all of us are subject to being surveilled and profiled far beyond the code and spirit of the law, while our safety, security and equal professional opportunities and career advancement are detrimentally compromised.

As Sa’adi the 13th Century Persian poet wrote, it is our common Humanity (-and not divisive racial, ethnic, color, creed, or orientations-) that bind us as one integrated frame on earth:

Humans are all members of one frame, since all at first from the same essence, came.
When by hard fortune one limb is oppressed, the other members lose their desired rest.
If thou feel’st not for others’ misery, A human is no name for thee.

Is it not still the US Government of the people, by the people, and for the people? Hence, the most urgent need and merit for this still great nation to reaffirm our constitutional commitment to the upholding equality for all citizens, is NOW. In fact, it is time for the two-third “shell-shocked” majority in the Nation, especially the 80 million naturalized American families, to move up to the center, so they could as a huge political action and voting bloc, complete mass registration and voting turnouts, while many must run for office at all local, state to national levels. The scrupulous exercise of our civil and constitutional responsibilities at the upcoming and all future elections is now if we still aspire to realign our beloved US with the principles of blind justice and equal opportunity for which it has stood through the test of time.