US Provided “Intelligence” And Bomb Used In Massacre Of Yemeni Schoolchildren

The involvement of U.S. military intelligence in “fine-tuning” the targets of coalition airstrikes is likely the main factor explaining why the U.S. government has refused to condemn the strike and has refused to support an independent investigation into the atrocity.

Last Thursday’s horrific bombing of a bus full of school children in northern Yemen was carried out using a weapon sold to the Saudi Arabia-led coalition by the United States, photo evidence of the bomb site has revealed.

The photos taken at the scene by Ahmed AbdulKareem for MintPress News and by other local journalists indicate that a Mark 82 (MK-82) bomb, jointly manufactured by U.S. weapons companies Lockheed Martin and General Dynamics, had been used in the attack.

The attack killed at least 50 and wounded over 60 others, the vast majority of whom were young children. Despite the fact that those targeted were civilians and mostly children, the Saudi-led coalition defended the strike, calling it a “legitimate military operation.”

MK-82 bombs, along with other “general purpose” MK series bombs, have been sold to the Saudi-led coalition by the U.S. through a series of contracts made in 2016 and 2017. In addition to last Thursday’s atrocity, the Saudi-led coalition has used the MK-82 bombs to target Yemeni civilians in the past, such as the coalition’s bombing of a funeral in 2016 that left over 140 dead and 525 wounded. 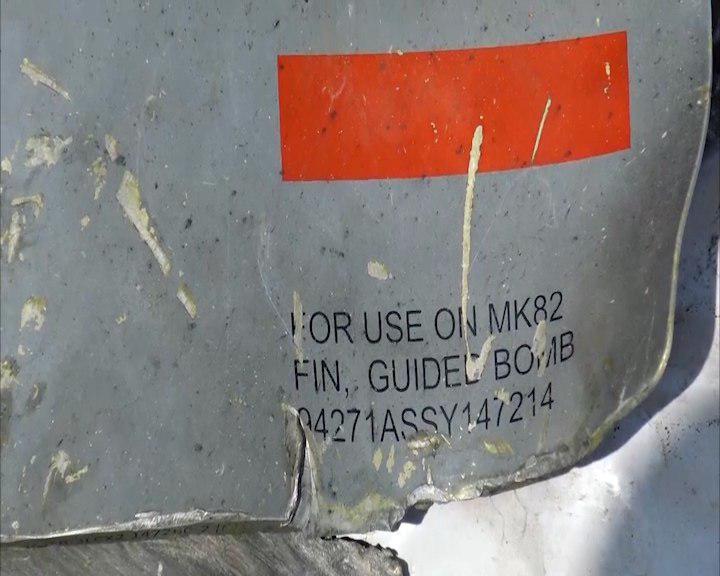 Over 10,000 MK-series bombs have been sold to the coalition since the war began, despite an international outcry over the coalition’s near-constant targeting of civilians and critical infrastructure. Overall, the U.S. has sold billions of dollars worth of bombs to the Saudis since the war in Yemen began in 2015, most recently approving over $110 billion in weapon sales to Saudi Arabia in May of last year.

The U.S. relies on “fog of war” excuse to avoid responsibility

Despite the fragments of U.S.-made munitions found at the strike site, the U.S. military has refused to acknowledge that the bomb used in the attack had been sold to the coalition by the United States. Army Maj. Josh Jacques — a spokesman for U.S. Central Command — told Vox that “We may never know if the munition [used] was one that the U.S. sold to them,” asserting as his reason the fact that the U.S. military doesn’t “have a lot of people on the ground.” Yet, the U.S. does have an unspecified number of ground troops active in Yemen who are involved with “intelligence sharing” and interrogations at UAE-run “black-site” prisons.

However, U.S. complicity in last Thursday’s bombing of a school bus goes far beyond merely providing the munitions used. Indeed, since this past June, the U.S. military has been providing the Saudi-led coalition “intelligence to fine-tune their [the coalition’s] list of airstrike targets” in Yemen — meaning that the U.S. military was either, at worst, involved in choosing the strike location, or at the very least aware of the coalition’s intention to target the school bus.

The involvement of U.S. military intelligence in “fine-tuning” the targets of coalition airstrikes is likely the main factor explaining why the U.S. government has refused to condemn the strike and has refused to support an independent investigation into the atrocity, instead supporting only a Saudi-led inquiry. Indeed, were the full extent of U.S. involvement in last week’s bombing made clear, the U.S. government could find itself in trouble, as certain government officials could be accused of complicity in coalition war crimes in Yemen.

However, the weapons companies themselves, regardless of the damage their products cause, continue to be free of any and all liability.

Cover photo: A man inspects the wreckage of a bus at the site of a deadly Saudi-led coalition airstrike on Thursday, in Saada, Yemen, Sunday, Aug. 12, 2018. Yemen’s shiite rebels are backing a United Nations’ call for an investigation into the airstrike in the country’s north that hit a bus carrying civilians, many of them school children in a busy market, killing dozens of people including many children. (AP Photo/Hani Mohammed)