The fallout from U.S. president Trump’s decision to retreat from Syria develops as expected.

Trump had announced a rapid draw down of U.S. troops in Syria. Later he spoke of a controlled process that would allow Turkey to take over the U.S. occupied areas in northeast Syria. That plan, probably initiated by National Security Advisor John Bolton, is totally unrealistic. Such an wide ranging occupation, which would be resisted by many powerful forces, is not in Turkey’s interest. Nevertheless, the Turkish president Erdogan will use the threat of a Turkish invasion to press for a dismantling of the Kurdish YPG forces which the U.S. trained and equipped. 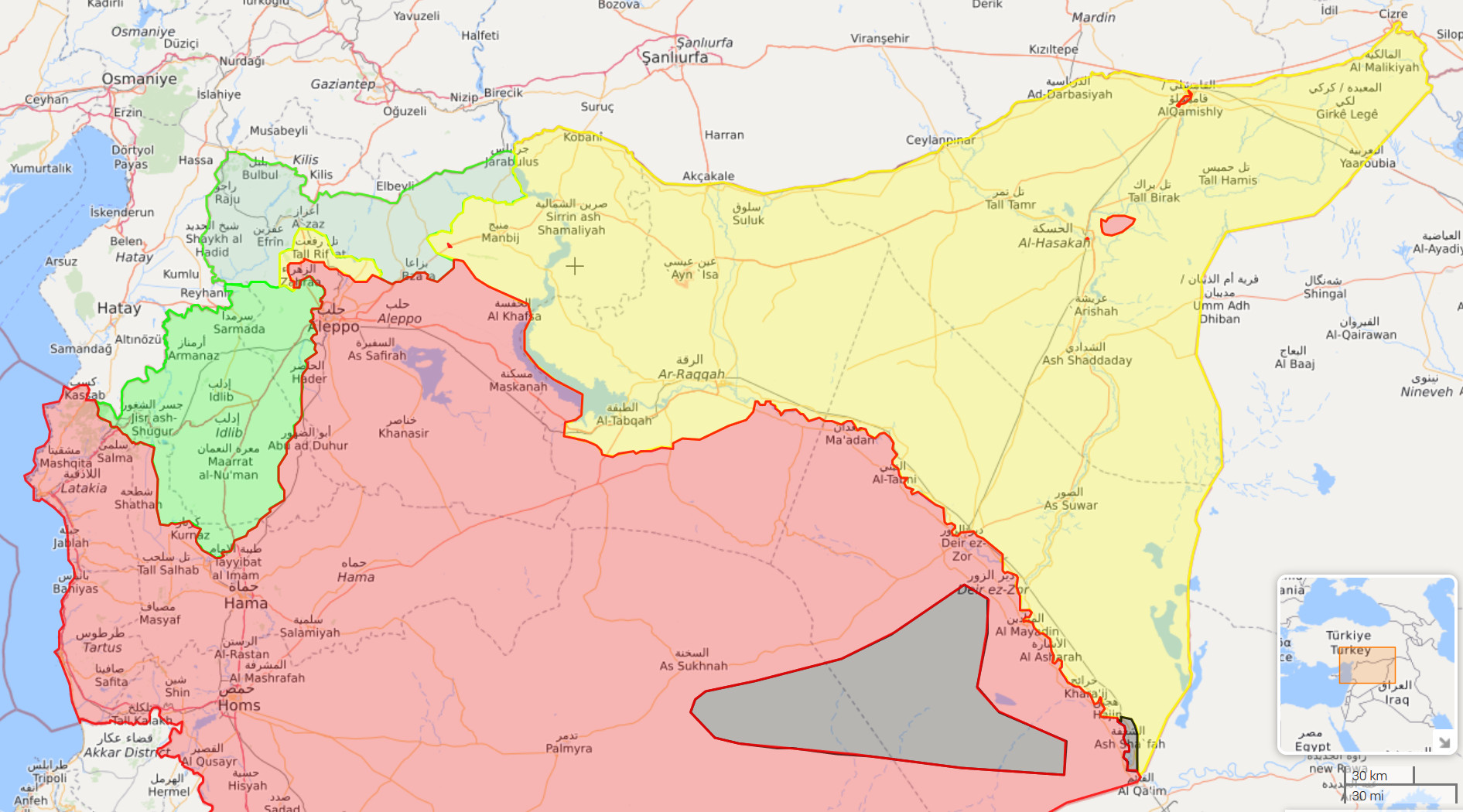 This morning the Syrian Arab Army (red) announced that it entered Manbij, west of the Euphrates. It established itself on the contact line between the Turkish supported forces (green) and the U.S. supported Kurdish YPG (yellow). The Syrian flag was raised in Manbij city. The move comes after U.S. troops and their Kurdish proxy forces voluntarily retreated from the area. Manbij was threatened by the Turkish military and its Jihadi proxy forces. To prevent a Turkish onslaught, the local armed groups, who collaborated with the U.S. military, invited the Syrian army to take over. This pattern will repeat elsewhere.

A Kurdish delegation is currently in Russia to negotiate a further take over of the U.S. occupied northeastern provinces of Hasaka and Qamishli by Syrian government forces. The Kurds still hope for some autonomy from the Syrian government that allows them to keep their armed forces. But neither Damascus, nor anyone else, will ever agree to that. There will only be one armed force in Syria, the Syrian Arab Army. It is possible though, that some Kurdish units will be integrated within it.

A Turkish delegation is also in Moscow and tomorrow Erdogan will visit there. Russia spoke out against the U.S. plan to let Turkey take Syria’s northeast or even parts of it. Erdogan will not get Russian or Iranian support for any such move. Moreover, he will be pressed to leave the other areas of Syria Turkey currently occupies.

U.S. troops are for now expected to continue the occupation near the Euphrates where the fight against remands of the Islamic State is ongoing. They won’t stay long. Trump successfully insisted, against the wish of his military, to completely pull out of Syria. The people who argue against the move are, not coincidentally, the same people who furthered the rise of Islamic State. After Secretary of Defense Mattis resigned over the issue further efforts by the military to delay the retreat will likely be futile. 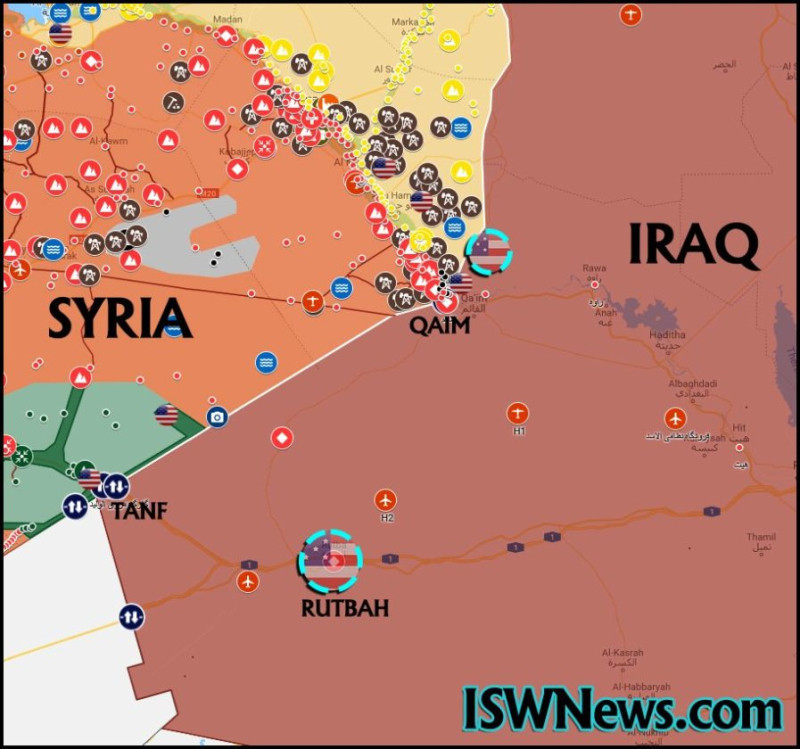 To cover the withdrawal from Syria the U.S. military established two new bases in Iraq. These are also blocking positions designed to prevent over land traffic between the Levant and Iran. It is unlikely that the U.S. will occupy those bases for long. The Iraqi parliament is already moving to again throw out all U.S. forces from its country.

The military moves come along new political ones which reestablish Syria as a pivotal Arab state.

Yesterday the United Arab Emirates reopened its embassy in Damascus. Bahrain will follow next. Kuwait will reopen its embassy in January. Oman never closed its embassy in Damascus. Of the Gulf countries only Qatar, allied with Turkey, and Saudi Arabia have yet to announce a revival of their relations with Syria. Before the war on Syria started, the UAE and other gulf countries financed several large investment projects in Syria. These will be revived and help the country’s economy back onto its feet. Egypt is expected to follow the move of its Gulf sponsors.

Underlying the UAE move is a strategy of countering Turkey’s neo-ottoman ambition. Syria is (again) seen as the bulwark that protects the larger Arabia from Turkish marauders. It signals to Turkey that any attempt to take over more of Syria will be resisted by the Gulf states and possibly even by Egypt’s army. Egypt is, together with Russia, mediating between the Kurds and the Syrian government.

The Arab move is also perceived as a counter to Iranian influence in Syria. In this it will fail. Syria was rescued from the all out attack on it by Iran’s intervention.

The Arab move is also perceived as a counter to Iranian influence in Syria. In this it will fail. Syria was rescued from the all out attack on it by Iran’s intervention. It was the Iranian General Soleimani who convinced Russia to commit troops to Syria. It was Iran that spent billions to prop up the Syrian government while the Gulf Arabs spent even more to take it down. Syria will not forget who are its foes and who are its real friends.

Air traffic connections from Damascus to Arab countries are coming back. Last week a direct connection with Tunisia was revived. In January Gulf-Air, the official airline carrier for Bahrain, will again offer flights from Damascus. The Arab League, which in 2012 kicked out Syria, will invite it back in. Syria may well accept the offer, but only in exchange for a large compensation.

An Israeli air attack on Syrian military installments on December 26 largely failed. The Israeli jets fired some 16 stand-off bombs from Lebanese air space. They cowardly hid behind two commercial airliners which were on their way from the Gulf to Europe. This made it impossible for the Syrian air defense to directly attack the Israeli jets. Most of the Israeli projectiles were destroyed by the Syrian short-range air defenses. A Syrian missile was fired against Israel proper. It was a reminder that new rules of engagement, as announced, have been established. Attacks on Syria will be replied to by direct attacks on Israel. The missile shot ended the Israeli attack.

Israel, like others, will learn that any further attacks on Syria are futile and will only lead to effective retaliations. The war on Syria, while not yet over, is drawing down. Syria’s political isolation is ending. Those who insist on continuing it will in the end lose out.