Iraq Is Next: Here’s Why All US Troops Could Be Out By End Of Trump’s 1st Term

The US presidential plane landed in the darkness of the Iraqi military base of Ayn al-Assad in west Anbar with Donald Trump onboard. But by the time his plane took off three hours later, Trump left behind a protocol-political-parliamentary storm in Mesopotamia as Iraqi members of parliament requested the departure of the 5200 US forces from the country. None of the three Iraqi leaders (Prime Minister Adel Abdel Mahdi, Speaker Mohammad al-Halbusi, President Barham Salih) came to receive Trump as all three rejected US conditions for such a meeting. Trump seems determined to leave Syria without interfering with who will control the territory behind him: this morning the Syrian Army entered the outskirt of the city of Manbij following a deal between Kurdish leaders and the government of Damascus. Will he also end up leaving Iraq before the end of his term in January 2021?

In preparation for Trump’s visit, Iraqi prime minister Adel Abdel Mahdi was asked to meet the US president. He agreed to meet Trump either in Baghdad, on Iraqi soil, or at the Ayn al-Assad military base, on the Iraqi side of the base; Iraqi national security forces and army units are present at the same base where US forces are deployed, in a separate part of the base. To have met on the US-controlled part of the Iraqi-US base would have made Abdel Mahdi appear as an invited guest in his own country.

A few hours before Trump’s arrival, US Ambassador Douglas Silliman told Abdel Mahdi that Trump would receive him in the US part of the base. Trump refused to visit Baghdad for a quick reception; neither would he even cross over to the Iraqi side of Ayn al-Assad, for security reasons. Abdel Mahdi refused the US invitation, as did the Iraqi president and speaker. All three politicians have risen in public esteem for having refused the US invitation.

Trump’s disregard for protocol when landing in a sovereign foreign country has infuriated local politicians, heads of organisations and members of parliament. They felt insulted and have called for the withdrawal of US forces from the country. Others threatened to force US troops out of the country.

Qais al-Khaz’ali, the head of a parliamentary coalition and leader of “Asaeb Ahl al-haq” (responsible for killing US soldiers during their occupation of Iraq between 2003 and 2011), said “Iraq will respond (to the Trump insult) through a parliamentary demand that you pull out your troops and if you don’t leave, we have the (warfare) experience to force you out”. 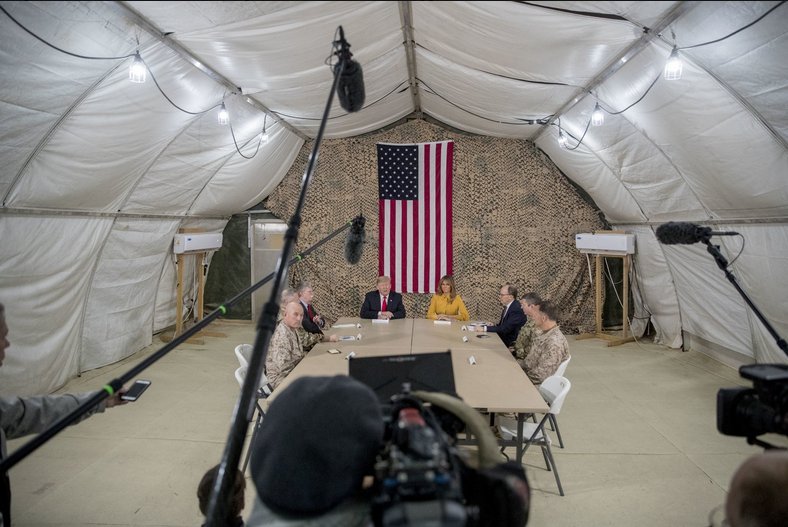 Tension was increased by Trump’s announcement that he plans to keep his forces in Iraq and may return to Syria from the Iraqi base. “Hezbollah Iraq” responded immediately by pledging to “cut the hand that will hit Syria from Iraqi bases”.

The US president seems prepared to keep his promise to withdraw from Syria, at least in the case of Manbij. The US announced an “organised exit”, meaning withdrawal in coordination with Turkey so that Ankara’s forces could replace withdrawing US troops. Turkey has been preparing to enter Manbij and Tal Abiad by gathering thousands of forces and proxies standing at the borders of the Syrian province. Nevertheless, the deal reached on Thursday night between the Syrian government and the YPG Kurds gave the green light to the 1stand 5thdivisions of the Syrian army to take back Manbij (still on the outskirt) and raise Russian and Syrian flags over the city. This development is blocking the road for Turkey and its proxies to move into the province. The decision was communicated to Turkey via Russia.

Moscow is standing in the way of any change of power on the ground, refusing Turkey control of more Syrian territory not already included in the “Astana deal”, which conceded Turkey temporary jurisdiction in the region of Idlib. Russia believes there should be a natural handover of the Kurdish-controlled areas to the Syrian Army following US withdrawal. Damascus and Tehran are adamant in this case: only Syrian forces should replace US troops in al-Hasaka province.

Moreover, Damascus forces are still based in Qamishli and can easily take over control of all positions when the US withdraw its occupation forces from northeastern Syria. Already there are observation points (villages) under the control of the Syrian Army, some with Russian observers, in different villages around Manbij. These represent a clear message to Ankara that no troops can cross without Russian agreement, otherwise they will be bombed and attacked. The control of Manbij is a game changer and a clear indication that the government of Damascus will take control of al-Hasaka province to concentrate later on Idlib, after the US withdrawal, with the help of Moscow.

Russia has called for an important meeting between presidential envoys, Foreign and Defence ministers and heads of intelligence services of both Russia and Turkey this Saturday in Moscow to talk about the US withdrawal and the role of each side. Another meeting (not yet final) is scheduled between Turkey, Russia and Iran in Moscow in a few weeks. The aim is to prevent any split between these leaders that could be triggered by the US withdrawal from occupied Syria. Damascus rejected the presence of the local Kurdish administration on its side and agreed to disarm the Kurds, a Turkish and Syrian request, after defeating ISIS.Indeed, the Kurds will help the Syrian army fight ISIS along the Euphrates river where a battle is expected to begin soon to end ISIS control of the area. As ISIS no longer enjoys US protection, the end of its occupation of a part of Syrian territory is near.

During negotiations with Russia, Turkey argued that the US might not allow the Syrian forces to move in. Turkey claimed that any changes to the deal established between Trump and Erdogan might alter the US decision to withdraw. Damascus and Tehran are indeed eager to see US troops gone from Syria, but not to deliver the area to Turkey. Russia supported Damascus on this position.

Ankara was indeed afraid that its unilateral decision to move into the Kurdish controlled area might trigger Russian intervention against its proxies (Euphrates Sheild, Jaish al-Islam, al-Hamza brigade, Ahrar al-Sharqiya and others), and might also lead Iranians to arm the Kurds and the Arab tribes in the province to prevent any further annexation of Syrian territory. The Turkish forces and their proxies currently occupying Jarablus, al-Bab, Afrin and Idlib, are unwilling to engage in a doomed war against the Syrian army, supported by Russia and Iran.

Turkey seems willing to accommodate Russia and Iran – the Turkish army and its Syrian proxies will never be able to cross the 500 kilometres from Manbij to Deir-ezzour where the richest area of oil and gas is. This area is only tens of kilometres distant from the closest Syrian Army position on the other side of the Euphrates river.

Russia asked Damascus and Tehran to lay down a strategy and coordinate with the Russian military to put forward a plan of action and a road map after US withdrawal, with the first priority of eliminating ISIS and avoiding any clash with Turkey if possible. The situation was very sensitive and complicated between these allies. With the return of Manbij, the situation seems to favour Syrian unity, marking the end of its partition or of any possible buffer zone.

Tehran believes the US won’t permanently leave the Levant and Mesopotamia without leaving unrest behind. This gives its officials an additional motivation to lobby the Iraqi parliament for a US withdrawal from Iraq.

There is no doubt that Iraq is a close ally of Iran and not a fanatic supporter of the US. The Iraqi parliament can exert pressure over the government of Prime Minister Adel Abdel Mahdi to ask President Trump to pull out US troops before the end of his mandate in 2020. The US establishment and the “Axis of the Resistance” can both connive and plan, but the last word will belong to the people of Iraq and to those who reject US hegemony in the Middle East, those who can accept losses and nurse their wounds in hopes of a better future.