Lebanese Judge Ahmad Mezher has given orders that a survey be conducted of Lebanese occupied territories in the Shebaa Farms, Kfarshouba, Huneen, Ideise and Bleeda. These villages are bordering Hasbaiya, Rashaya al-Fukhar and Kiyam and have been under Israeli occupation since 1981, as Syria’s Golan Heights have been since 1967. This step coincides with the illegal “gift” of the Syrian Golan Heights offered by US President Donald Trump to his closest ally Prime Minister Benyamin Netanyahu. Although Trump’s move was verbally condemned by the international community, no other state or international body seems likely to openly oppose Trump’s move at the moment.

However, Lebanon has decided to confront this move on the ground, showing its readiness to defend its territory if US “gifts” were ever seen to include Lebanese occupied territories. The Lebanese presidency, the Parliament and the government agreed that it is the right of Lebanon to regain its occupied territory and that the equation “the army, the people, the resistance” is united under one umbrella. Thus, the possibility of confrontation between the Resistance – i.e. Hezbollah in this case – and Israel is now on the table.

The level of tension and chances of confrontation increased during Lebanese President Michel Aoun’s visit to Moscow. During meetings with his homolog Russian President Vladimir Putin, the Christian President Aoun rejected US pressure on his country. The US establishment, including Secretary of State Mike Pompeo and his envoys to Lebanon, wants to prevent the over one and a half million Syrian refugees in Lebanon from returning home. President Aoun also rejected Trump’s gift to Netanyahu, stating clearly that the Golan Heights is Syrian territory illegally occupied by Israel,  and not the property of the US to dispose of as it will. 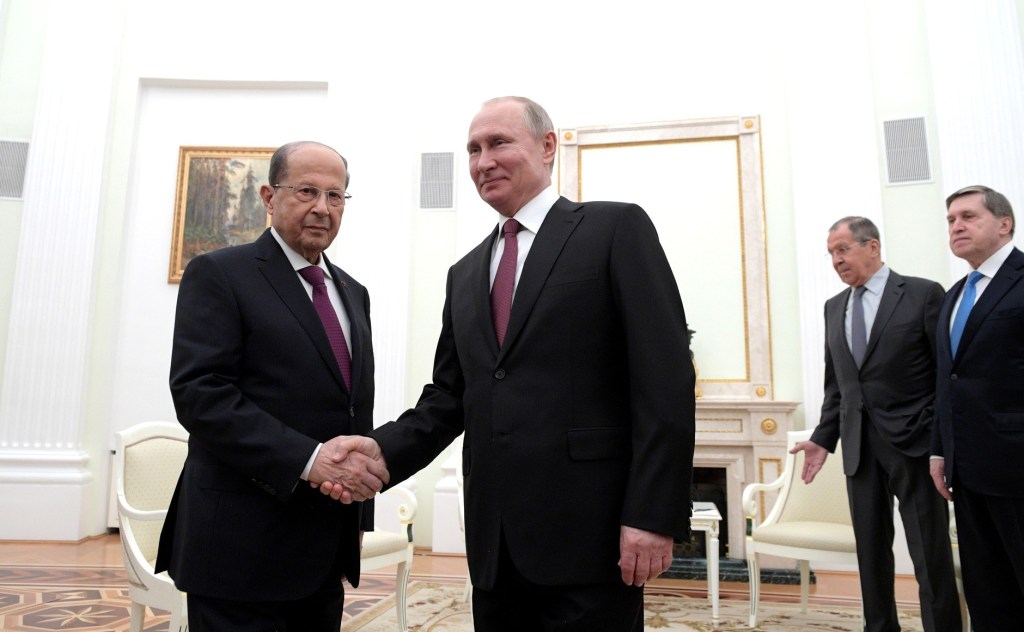 It remains unclear whether the Shebaa Farms, Kfarshouba and neighbouring villages are part of Trump’s gift to Israel. This is why Lebanese authorities have requested the judiciary authority officially survey the southern Lebanese territories occupied by Israel. If, in response to the survey, any attempt is made to assert that these areas are part of Israel, then the Lebanese triad (the army, the people and the resistance) will be bound to recover its occupied territory. The timing of the decision is important because it shows the readiness of the Lebanese government to raise the subject and to confront Israel in the wake of the US decision on the Golan Heights, a territory closely linked to the Lebanese farms and villages. As recently as 2009 some of these lands were contested between Syria and Lebanon, but now that Lebanon is in a better position than Syria to vindicate its claims against Israel, the Syrian government will be happy for it to do so.

President Aoun raised these issues with President Putin in the context of Trump’s previous gift of Jerusalem, by virtue of his recognition of an undivided Jerusalem as the capital of Israel. Lebanon fully supports the right of return of Palestinians to their land, particularly since there are over 800,000 Palestinians living in Lebanon. Just as the US would prefer these Palestinians to remain in Lebanon, the US now seems to want Lebanon to accept an ongoing presence of Syrian refugees on Lebanese soil. The US policy of keeping Syrian refugees in Lebanon has several goals.

The first is to shift the religious balance of power in Lebanon. Most Syrian refugees are Sunni (mainly hostile to Assad and to his allies) and the US would like to see a Sunni plurality in Lebanon to confront Shia Hezbollah and the society behind it. All Israeli wars have failed to curb Hezbollah and could not reduce its strength. On the contrary, Hezbollah military power is increased to an unprecedented level domestically and regionally. Moreover, in the last Lebanese Parliamentary polls, Hezbollah won more votes than any religious party, surprising everyone. Support for Hezbollah goes beyond any one religious confession; it has proved itself as a force defending Christians and Shia against Wahhabi takfiri extremists. Confronting Hezbollah face to face would lead to certain failure, hence the US need to strategically build another society to stand against it.

President Aoun insists on the return of Syrian refugees to Syria, notwithstanding the financial incentives being offered by the US and Europe to keep them in Lebanon. The presence of the refugees upsets the religious equilibrium in Lebanon, and accelerates the process by which Christians are becoming a minority on Lebanese soil. The religious terrorism that hit the Middle East over the last decade targeted regional minorities, notably the Christians. The same NATO leaders whose governments sponsored takfiri terrorism against Christians in the Levant proposed to Lebanese Christian leaders that they leave the land of their ancestors and settle in the west. Christians who were raped, murdered and terrorized by ISIS and al-Qaeda in Iraq and Syria would have suffered the same fate in Lebanon had Hezbollah decided to entrench themselves in the south of Lebanon, in the Beirut suburbs, or in selected villages of the Bekaa Valley.

The US establishment is undermining Lebanon’s security and peace by imposing one and a half million refugees on the country, destabilizing the local society, and threatening to impose sanctions if Lebanon does not submit to US bullying.

Moreover, the Lebanese President considers the Syrian refugees security and a financial burden that is placing a heavy burden on the fragile and chaotic Lebanese infrastructure.  These refugees currently represent a third of the total Lebanese population.

Another objective of US refugee policy in Lebanon is to recover from Syrian President Bashar al-Assad what it failed to achieve by arming militants to overthrow his government over the last 8 years. The US establishment would like to keep over 5 million Syrian refugees outside Syria, mainly in Lebanon, Jordan, Turkey and Europe. This, in US thinking, could impede forthcoming presidential elections in Syria, and prevent both the rebuilding of the Syrian Army and the reconstruction of the country. Syrians are skilful craftsmen; keeping them away from home impedes rebuilding.  All these US objectives do not help Lebanon in any way. On the contrary, they weaken Lebanon, which needs a healthy relationship with neighbouring Syria for its security and commercial development.

Trump has made the Middle East less secure. He has offered Israel an illegal and unnecessary gift. Israel was already controlling the Syrian Golan Heights; Syria posed no threat to it. Syria had not fired a bullet against Israeli occupation of the Golan for 30 years and will be busy for the next ten years rebuilding its destroyed infrastructure. Moreover, the late President Hafez Assad had engaged with Israel, through US mediation, to negotiate a peace deal in exchange for the Golan Heights. It was Israel who rejected the deal at the last minute. Assad then said he would leave liberation of the territory to the generation to come.

The US establishment is undermining Lebanon’s security and peace by imposing one and a half million refugees on the country, destabilizing the local society, and threatening to impose sanctions if Lebanon does not submit to US bullying.

Trump gave Jerusalem to Israel and can no longer be considered a partner in any peace process. This realization has given new urgency to the Palestinian cause. He is not willing to give a state to the Palestinians, but he is disposing of their rights.

US forces are unwelcome in Syria, occupying a third of the country and a bordering passage, while ISIS no longer controls any Syrian territory in the north-east. At the same time, the US is keeping tens of thousands of Syrian refugees at the al-Rukban camps from returning home.

In Iraq, the parliament is divided between those willing to see the last US soldier depart and those who want to maintain some training and intelligence collaboration. Iraqi politicians are afraid of asking the US to stay or to leave permanently for fear of seeing ISIS return with US support in either case (if US forces stay there is fear of seeing the US support for ISIS, an eventuality Iraqis also fear if the US were to leave).

Finally, the US is now seen as a superpower ruled by a thug sucking wealth from the oil-rich Arab countries, forcing them to buy US weapons so that Middle Easterners can continue killing each other at their own expense. Arab countries, once very rich, are imposing local taxes they have never imposed before on their own nationals and are going through a financial crisis unheard of for decades. Syria, Iraq, Yemen, Palestine and Lebanon are on the floor financially and even Saudi Arabia, the Emirates, Qatar and Bahrein are not in their best financial shape. Iran’s nuclear deal was revoked and since Trump took power the country is facing the harshest sanctions ever.

It is unclear when the next war may erupt to challenge US hegemony in this part of the world. It is clear that Russia and China are already present in the Middle East, ready to take the place of a US establishment which is no longer regarded as a friendly nation by any state but Israel.

Cover photo: Hezbollah flag flies near the border with Israel and the contested Shebaa farms (AFP)