Xerxes, the fifth king in the line of the Achaemenid rulers (b. 519 BC) is the first king in history who could not just go past by a beautiful tree while on his way to punish the Athenians and Spartas.

Xerxes before becoming a king was the viceroy of Babylon. He was far more enthused about his building projects than going to war but the war party was powerful and he had no choice but to lead it. Like his building projects the campaign was on a gigantic scale and an engineering feat. After his return he devoted himself to constructions and worked on the Gate of Nations and Hall of a Hundred Columns in Persepolis.

Many know Xerxes through the Book of Esther, and how she saved the Jewish people against the evil intention of Xerxes malign vizier, Haman. Xerxes is also portrayed as a megalomaniac king in the graphic novel 300 by Frank Miller. Who can forget Rodrigo Santoro, the Brazilian actor as Xerxes in the movie version! He looked like a parade leader in the Brazilian Carnival. Santoro was nominated for his role for an MTV Movie Awards in the category of Best Villain but lost to a more evil character, Jack Nicolson in The Departed.

Xerxes admiration for a plane tree which stood elegantly by the  Maender River (Büyük Menderes River in southwestern Turkey) is consistent with Xerxes’ impassioned personality. He never did anything halfheartedly.  Also considering the ancient Iranian fascination for gardens and the Zoroastrian belief that everything good and beautiful is created by Ahura Mazda, Xerxes couldn’t have been but full of awe for the plane tree. It was like love at first sight.

Many friezes in Persepolis are decorated with palm and cypress trees which shows a great fondness for trees in the Iranian Zoroastrian culture. But Xerxes had never seen such a fine specimen in his life and being a gardener he most probably wished he could grow that tree back in Persia. His love for that tree was so great that he ordered the tree to be adorned with gold and jewels and left behind one of his Immortals to stand guard.

Stories regarding Xerxes life have grown more popular over the centuries. In fact, no other Persian king in pre-Islamic Persia has been as much part of the European culture as Xerxes, yet he is someone we know so little about! He has inspired an opera libretto written by Metastasio titled, Artaserses (Italian for Xerxes) which was later put to music by Leonardo Vinci. He has also found his way into Handle’s opera, Serse (Xerxes). Gramophone magazine describes the opera: “Today the very qualities that puzzled its original hearers – the lightly ironic, occasionally farcical tone, the fluid-structure (many short ariosos, relatively few full-dress da capo arias) – have made Serse one of Handle’s most attractive operas for stage directors and audiences alike.”  The Serse opera continues to be performed and there’s been two recordings of it in 2018 alone, one conducted by Constantinos Carydis a Greek conductor and the other by Maxim Emelyanychev the young Russian conductor.

Xerxes was more religious than Cyrus and Darius the Great perhaps. According to Richard Stoneman who published a biography of Xerxes in 2015, Xerxes was responsible for a religious revolution. It’s very likely that his statement is true which makes it the second revolution of its kind in the history of Persia. The first one being by Zoroaster. Xerxes, unlike previous Achaemenid kings, shows great intolerance for the gods of other nations notably of the Babylonian’s going as far as melting down the golden statue of Bel (Marduk) and refusing the title King of Babylon from his father. Egyptian gods and Persian religious deities didn’t sit comfortably next to each other in the pantheon of gods either and the tension was always high.

Xerxes’s admiration of the plane tree can be compared to the great Catalan architect Gaudi who had a high opinion of trees.

Xerxes’s admiration of the plane tree can be compared to the great Catalan architect Gaudi who had a high opinion of trees. Gaudi thought there was no better structure than a trunk of a tree. When Gaudi used tree-like columns in his architectural masterpiece, Sagrada Família, to pay homage to his beloved trees, Xerxes used actual trees in the construction of his buildings. The massive ceiling of the central hall of Apadana (capacity for 10,000 guests) rested on large heavy cedar beams supported by columns. In the Gate of All Nations cedar beams resting on the back of the double-headed bulls supported the roof. 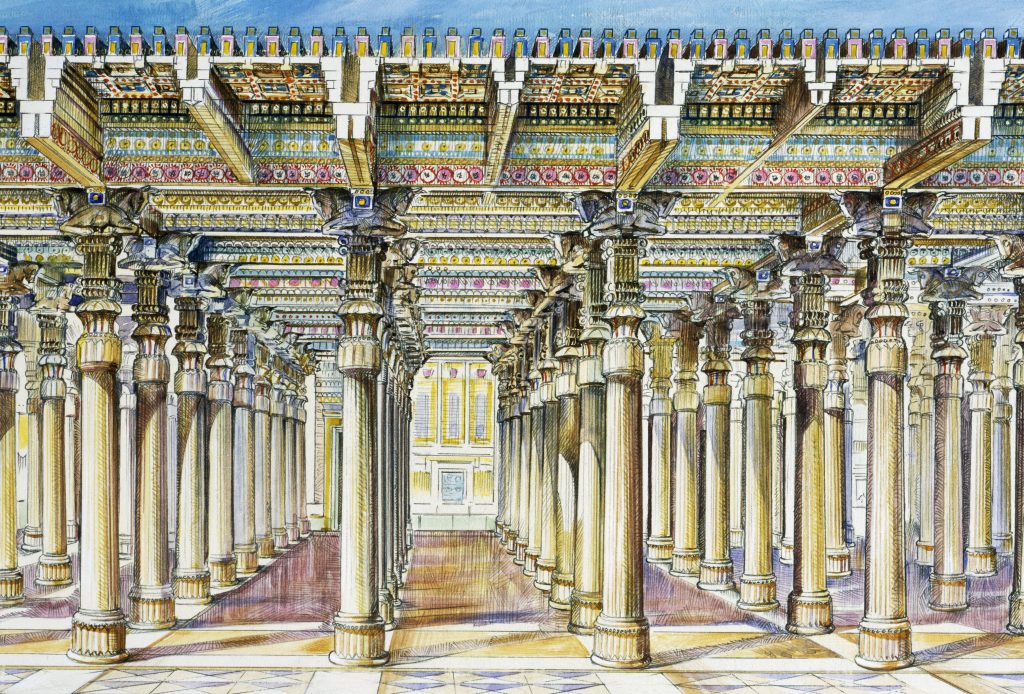 It’s hard to imagine the Achaemenid kings as gardeners, bent on their knees watering trees, planting, plowing the soil. Contrary to the way they are portrayed in ancient monuments with their feet always resting on a footstool never touching the ground some of them had a keen interest in botany and horticulture. To make a barren landscape burst into life was their great religious commission. Naturally, in their free time, they hung up their robes and pulled up their sleeves and hoed, sieved and winnowed, holding conversations with their full-time gardeners about bugs, insects and pest control.

His passionate love affairs, his love for gardens and the environment, his deeply religious and poetic nature, his grand and beautiful buildings, all reveal a person with as much passion as talent.

Xerxes who could hardly wipe the sweat off his forehead for all his hard works was assassinated in his 50s. However, his relatively short life has hardly any equal in the ancient world. His passionate love affairs, his love for gardens and the environment, his deeply religious and poetic nature, his grand and beautiful buildings, all reveal a person with as much passion as talent. Even in the thick of war with the Greeks after surveying his troops he said, “I am moved to pity, when I think of the brevity of human life, seeing that of all this host of men, not one will still be alive in a hundred years time.” It was life itself he was surveying and couldn’t help but feel sad for his men many of whom, some very close to him, didn’t make it back.

Xerxes contrary to the way he is portrayed by some Western historians did not seek self-glorification. In his inscription it is written, ‘By the grace of Ahura Mazda, this Gateway of All Nations I made; much else that is beautiful was done throughout Parsa which I did and which my father did.’ He is giving all the glory to God for allowing him to do anything that was worthwhile and lasting.

Although Xerxes’s reputation has suffered in the hands of cartoonists and Hollywood producers, he is unlikely to go away and will appear in more opera productions, films, books etc…And perhaps one day we become to appreciate him as who he really was.

Information on the state of the world’s forests

Plant a Tree in Your Neck of the Woods

PrevPreviousIran’s Shock Therapy Breaks JCPOA Stalemate
NextDemise Of The US Empire: Trump’s Incessant Sanctions On Iran And Others Curbing The Dollar’s HegemonyNext