President Trump ran his presidential campaign under the slogan of “America first”. In his inaugural speech he stated that his “America first” approach ushers a new decree; a new vision of governing the US, and a new foundation for every single decision he will make to benefit only Americans. He reiterated this slogan in many of his speeches including his address at the UN General Assembly.

Listening to Trump’s speeches emphasizing his “America first” policy I could not help but be reminded of the Nazi slogan “Deutschland über alles”: Germany above all. Yet later, it became obvious to many that Trump’s “American first” policy is actually “Israel first” policy on the expense of American tax payers and breaking many international laws.

As a present to his Zionist Jewish $100 million campaign donor; Sheldon Adelson, and under the threat of Mueller’s investigation to expose Trump’s laundering money for Ukrainian Jewish mafia, Trump recognized Al-Quds (Jerusalem) as the capital of Israel in violation of all international laws and agreements. He also closed the Palestinian office in Washington, withdrew American funds from UNRWA and UNESCO accusing both international organizations of anti-Israel bias, and diverted the funds to Israel. Immediately after that Mueller’s report came out to clear Trump as a reward.

Trump’s withdrawal from Iran nuclear deal and imposing economic sanctions against Iran came as a free gift to Israel.

Trump’s withdrawal from Iran nuclear deal and imposing economic sanctions against Iran came as a free gift to Israel. On top of that, he designated Iranian Islamic Revolutionary Guard as a foreign terrorist organization. Trump’s administration is applying severe economic sanctions and tremendous political pressure against Iran accusing it of attacking oil tankers and threatening the marine security in the Gulf. The administration is trying to form an international Gulf security coalition to limit Iranian control over the oil-rich Persian Gulf.

In March 2019 Trump signed presidential proclamation recognizing Syrian Golan Heights as Israeli territory although admitting that Israel took control of the Golan Heights by illegal force to safeguard internal security from external threats. Similar logic would grant Arab countries such as Syria, Jordan, Lebanon and Egypt the right to take control of parts of Israel to safeguard their own internal security from external threats by terrorist Israel, who keeps attacking these countries. 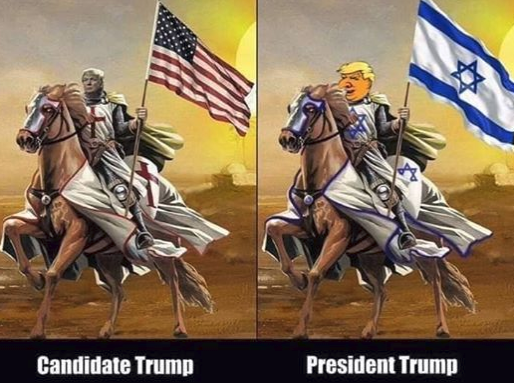 History shows that “Israel first” had been the policy of successive American administrations since President Harry Truman, who voted in 1948 in the UN for the creation of terrorist Israel on occupied Palestinian land. All successive administrations, except John Kennedy’s, had adopted the Israel first policy, even though Israel assassinated American politicians,  attacked American assets, spied on American facilities, stole American technology and nuclear material.

Zionist Israeli Jews assassinated three political members of the Kennedy family. President John Kennedy was assassinated because he was about to expose the Federal Reserve (not really Federal but Zionist Jewish financial bankers, who create and print American money out of thin air) and to create new monetary system. He also attempted to expose the illegal Israeli nuclear weapons program. Robert Kennedy was assassinated because he was following the steps of his brother John. The private plane of John F. Kennedy Jr. was targeted killing him, his wife and his sister-in-law to stop him from exposing the murder of Yitzhak Rabin, then Israeli Prime Minister, in his political magazine “George”, and for his relentless effort to investigate the murder of his father.

Israel had intentionally attacked the USS-Liberty ship killing 34 marines and wounding 171 others even after identifying it as American. Targeting the ship with napalm bombs the Israeli goal was to incriminate Egypt of the attack in order to get the US to attack Egypt. The ship, though did not sink and called for rescue. Shame on then President Lyndon Johnson and his Secretary of Defense McNamara, who ordered rescue planes recalled twice because “we are not going to embarrass an ally.” This led Admiral Thomas Moorer to pose the key question “Did our government put Israel’s interests ahead of our own?”  Joan Mellen’s book “Blood in the Water: How the U.S. and Israel Conspired to Ambush the USS Liberty” describes the attack as a deliberated collaborative attack by Israel and the United States, whose purpose was to provide a satisfactory pretext for launching retaliatory strikes against Egypt with the primary objective of destabilizing the Egyptian Government and removing Gamal Abdul Nasser from power.

Israel has a long history of spying on the US, its politicians and citizens. Israeli Amdoc software was caught spying on the land lines phones of every American. Israeli cyber organizations such as Act.il are also spying on American cell phones and social media websites. Citing national security risk recently Trump added Huawei and its 5G networks, the Chinese telecom group, to the trade blacklist. This action came to restrict competition to Israel’s spying apps infesting the Android operating system which is a higher security risk to all Americans.  Such action had backfired since Huawei has develop its own app store competing against Apple app store.

According to a 4 parts investigation by Fox News anchor Brit Hume in 2001, US intelligence agencies report that the government of Israel have been conducting the most aggressive espionage operations against the US of any US ally. The story of former Zionist Jewish American navy intelligence analyst Jonathan Pollard is very well known to many. Crimes of Israeli spying on the US are numerous to mention in this article. Here are few others.

Israel had also stolen American nuclear material and technology to build its own nuclear bombs. The Apollo Affair exposed one of such thefts. In this video lecture nuclear engineer Dr. Roger Mattson details who and how Israel stole 287 kg (600 pounds) of American weapon-grade nuclear material.  It is worth stopping the video to read Mattson’s informative slides. One can also read Mattson’s book about this theft titled “Stealing the Bomb: How Denial and Deception Armed Israel.”

If Israel’s theft of American nuclear technology and material is not offensive enough to the American politicians, then how about Israel selling this technology to American foes; China is one example. With friends like Israel who needs enemies.

Seventeen years after the 911 attacks there is no doubt in the minds of many, except in those of the real conspirators and the gullible Americans, that Israel did attack the US. All the research and expert analysis lead to this fact. There are many books and videos about the subject confirming that Israel did 911. The five dancing and 60 other Israelis arrested and released by the authorities had confessed on Israeli TV that they were documenting the attack, implying advanced knowledge of the impending attack. Suffice it to watch PressTV interviewing the most censored man in the US Dr. Alan Sabrosky; a US marine corps veteran, former director of studies at the US Army War College, advisor on national and international security affairs at CSIS (Center for Strategic International Studies), and receiver of Superior Civilian Service Award among many other titles.

The big elephant in the room that the majority of American politicians are ignoring is Israel’s control over the president, over the Congress, over the Senate, over major media outlets, and specifically over American foreign policy in the Middle East through its rich Zionist arm of AIPAC. For generations, every Congress member had been forced to sign an Israel loyalty pledge in order to get campaign funding and support, otherwise, an opponent would get all the funding. AIPAC’s funding and influence over Congress guarantee the adoption of pro-Israeli laws even when they contradict the American constitution, contradict American interests, and harm America globally. Watch the video of 21 presidential candidates for the 2020 election pandering to Israel when asked about Israeli war crimes and human rights violations.

During an interview on the Richie Allen Show (forward counter to 12:37) former Congresswoman Cynthia McKinney declared that AIPAC is in total control of the US Government. She stated that she, like every other Congress member, was asked to sign a pledge to support Israel’s military superiority, financial aid, Jerusalem as capital of Israel among others even before sworn in as a Congress member. She explained that any Congress member, who does not sign the Israeli pledge is politically persecuted, criticized by the media, and does not get funded while her/his opponent gets all the necessary funding. In 2011 McKinney dared to expose the fact that US lawmakers are forced to support Israel, and that both political parties; Democrats and Republicans, are controlled by AIPAC’s money.

John Mearsheimer and Stephen Walt’s book “The Israel Lobby and US Foreign Policy” explains clearly that any politician, who dares to display insensitivity or hostility towards the influence of Israel of its AIPAC over the congress, will be subjected to an aggressive orchestrated campaign of propaganda and defamation similar to what happened to Senator Charles Percy from Illinois in 1984.

Not until recently when independent newly elected Congresswoman Ilhan Omar criticized AIPAC’s power over Congress members that political groups and independent media started talking about the issue and came to support Omar.

RT-America TV broadcaster Rick Sanchez blasted Israel loyalty oath sweeping the US. He explains that there is no law that prohibits American citizens from criticizing, boycotting America and even burning her flag, but a long-standing American teacher has been fired from her government job because she refused to sign Israel loyalty oath. He criticized the pervasive Israel loyalty oath legislation that had been enacted by 26 states as unconstitutional.

Israeli leaders are aware of Zionist influence over American presidents. Washington Report reported on October 3rd, 2001, that then Israeli prime minister; Ariel Sharon yelled at Shimon Peres; the foreign minister, “Don’t worry about American pressure, we, the Jewish people, control America, and the Americans know it.” Also, The Washington Post reported Israeli prime minister Netanyahu once boasted to settlers that “America is a thing you can move very easily.” 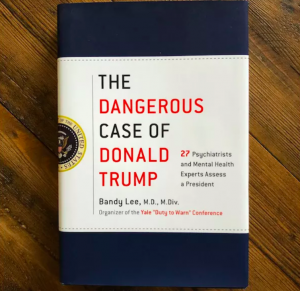 Despite the fact that the American national debt was guesstimated at $24.56 trillion at the end of FY 2018 and is expected to rise more than $2 trillion from the day Trump took office, despite the budget cuts in all the basic services; education, health, housing, infrastructure, crises management …etc., American administrations have been militarily and financially supporting Israel on every level.

The US gives Israel $3 billion every year in direct aid at the beginning of the fiscal year. This money is taken as a loan, whose interest is paid by American tax money. The first Senate bill of 2019 proposes to pay Israel a minimum of $38 billion over the next 10 years. This means $23,000 per Israeli family of four, while American families get only the bill.

Every 5 years the Congress renews a Memorandum of Understanding with Israel whereby the US guarantees all Israel’s oil needs in event of a crisis. This Memorandum was signed by then Secretary of State; Henry Kissinger in 1975 committing the US to build and maintain a strategic oil reserve for Israel, even to the extent of creating shortages for American citizens. The US also guarantees the delivery of this oil in its own tankers.

When it comes to Israel successive American administrations are ready to break all the rules, all the laws, create, arm, finance and support all kinds of terrorist organizations, violate the rights of any country that may stand against the expanding terrorist Zionist project; Greater Israel. These administrations are even violating the rights of their own American citizens for the sake of Israel.

Every day more and more Americans come to agree with courageous Lee Whitnum; former 4th District Congressional Candidate, who exposed AIPAC’s influence during a television debate stating “we are hated worldwide because of our support to Israel.”

Cover photo: US President Donald Trump visits the Western Wall, the holiest site where Jews can pray, in Jerusalems Old City on May 22, 2017.