“After the summer of 1988, when we returned to ward 2 of Gohardasht Prison or Evin, we found all the cells empty. I could hear Farhad’s [a famous pop singer] lyrics. I felt as if I were stepping on my friends’ ashes.  As if death was scattered on the soil.   It was not about a wilted leaf; the whole forest had become a desert.   Those who had brought us joy at one time were all gone.  How could I live with this terrible silence?  I felt death myself in a place that had been a slaughterhouse.  They had taken all my companions from us, from right here to the gallows, one by one”  — I.M.

Voices of a Massacre: Untold Stories of Life and Death in Iran, 1988, edited by Nasser Mohajer, is a painstakingly compiled account of the ordeal suffered by the thousands of Iranian political prisoners who perished in the summer of 1988, including the testimonies of those who survived. It bears witness to a national tragedy.

Angela Davis, the famous African-American activist, now a professor at UC Santa Cruz, writes in the introduction to the book, “There may be those who argue that these events took place long ago and that there is little to be done today, but the fact that it has been more than thirty years since this atrocity took place is an even more compelling reason why an international solidarity movement is needed to support the demand to render the Islamic Republic of Iran accountable for past as well as ongoing acts of repression.”

The book, which took ten long years of research to complete, is divided into six chapters in which 25 eyewitnesses talk, in harrowing detail, about the massacre that took place at the end of the Iran-Iraq war, in the summer of 1988, as per a fatwa issued by Ayatollah Ruhollah Khomeini, the founder of the Islamic Republic. Declaring that he had drunk the cup of poison ending the war, Khomeini ordered a “final solution” to the plight of thousands of political prisoners who had been incarcerated for years, having undergone horrible torture and awaiting the termination of their sentences. 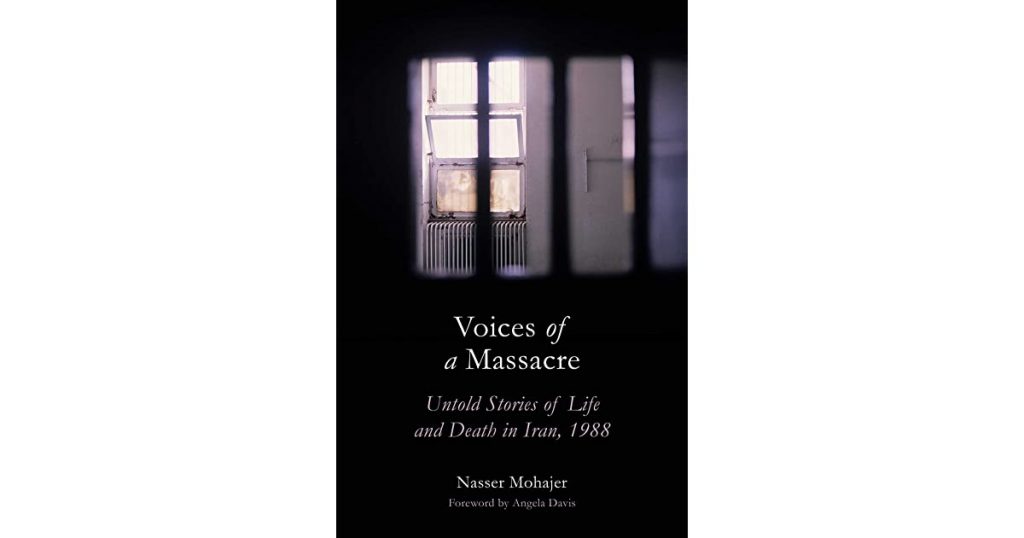 Nearly 5000 prisoners, Mojahedin, (OMPI) supporters,  members of the Fedyaeen (OIPFG), Tudeh party affiliates and individuals without organizational connections, some as young as 14 and 15, were all taken to the gallows, one by one, and executed.   Some were caught in between having had no history of any engagement.

Never in the history of Iran have political prisoners who had gone through interrogation and trials, been executed in such a brutal way at the hands of prison officials.

It was all done in total secret but word gradually came out of the prisons until the news reached the UN High Commission on Human Rights at the time. Despite the overwhelming evidence, IRI officially denied any wrongdoing.

Never in the history of Iran have political prisoners who had gone through interrogation and trials, been executed in such a brutal way at the hands of prison officials.

The death commission as it was called, was comprised of the current head of the Judiciary, Ebrahim Raisi, in addition to Hossein-Ali Nayyeri, Morteza Eshraghi and Mostafa Pourmohamadi. Upon  Khomeini’s fatwa and against the warnings of Ayatollah Montazeri (the Grand Ayatollah who was to replace Khomeini only to be sidelined) who was informed of this crime, they finished their criminal undertaking.

The families of the murdered victims were only informed a few weeks later when visitations were permitted again and relatives tried to visit their loved ones.  They were given the belongings of their executed sons, daughters, brothers, and sisters, having been told in the most inhumane way that they had been executed.

The worst part of this heinous crime against humanity was that the families were never given the corpses of their loved ones, all having been buried in the Khavaran cemetery or in mass graves at unknown locations. Until today, some 32 years after the crime, mothers of Khavaran as they are called do not know where their sons or daughters are buried.  Not a single one of them has a plaque.  For in the eyes of those who committed these crimes,  according to the teachings of Koran,  they were mortad ( apostates).

While most of the prisoners were murdered in Evin, Gohardasht and Ghezel Hessar prisons in Tehran, the remainder perished in provincial prisons.

Mehdi Aslani, a survivor and member of the Fedayeen recalls, “ Ward 8, as well as Ward 7 and the sub-Ward 20 in Gohardasht, all over-looked the Hosseinieyh ( a Shi’ite place of worship) where the Death Row prisoners were hanged.  During that bloody summer,  the Islamic court hearings inside Gohardasht lasted only a few minutes, and thousands of death sentences given out were implemented just as quickly.” (page 112)

The few officials of the Islamic Republic who have alluded to “some executions” in the summer of 1988, have not just not shown any remorse but are mighty proud of their actions.  They blame this crime on OMPI operation Forough Javidan in which the Mojahedin attacked some cities in western Iran from their bases in Iraq. However, the truth is that this crime was committed against all prisoners regardless of their affiliation or ideology, no matter the so-called crimes they had committed.  To them,  they all had sinned; they had all acted against God.

Amnesty International in a statement in 2019 stated: “Mostafa Pourmohamadi, the former head of Ministry of Information ( Etellaat) and one of the most notorious figures of the Islamic regime and a current advisor to the judiciary stated while “Defending the mass extrajudicial executions of 1988 provide shocking confirmation of the authorities willful flouting of International human rights law both at the time and now a stark reminder of the sense of impunity that senior officials linked other killings enjoy.” ( preface)

Ali Razini, another judge, in reaffirming his devotion to the sacred order (nezam-e moghaddas), said at one point, “We had the courage to say that whoever we executed, we signed our names underneath and announced that this is the reason for so and so who was executed and this is an honor for us.”

In a letter to the Death Commission, after being warned of what was going on inside prisons, the only cleric who voiced his opposition, Ayatollah Montazeri, writes:  “This kind of massacre of prisoners without any trial will certainly benefit them [the Mojahedin]  and encourage them to engage in further armed struggle, and the world will condemn us.  It is wrong to fight an idea with killing.”   (page 369)

He was the only prominent cleric in his opposition.

According to Mohajer, months before the executions, the Tudeh Party of Iran, “was warning against the serious threat that jeopardized the lives of political prisoners.”   ( page 332)

“Let me tell you something,” said the chief interrogator to Mahnaz Saida who was only 15 when she was arrested and who spent another five years in prison. “Today I want to talk to you about something serious.  I want to tell you that we’re planning a carnage.  We have a slaughter and purge place.  We plan to kill you.”  (page 23)

While going to the toilet, after begging to do so after many hours,  one prisoner recalls the words of a guard,  “ What are you doing here?  What am I doing here,  they brought me here.  I have done nothing….. Listen, you have not heard this from me. But listen to them, Listen to whatever say.  Do whatever they want you to do. If you don’t, they will execute you!”  (page 155)

Prisoners were tortured severely by prison guards and humiliated by their interrogators during their incarceration and until just before their executions.  No mercy was offered to these Koffar as they were called.  Two methods of torture which were extremely painful were the coffin and the apartments. In one, prisoners were put in a box that looked like a coffin for weeks on end, getting their meals there while in that position, and women prisoners were taken to tiny cells called apartments, where kept there for weeks and months. Flogging harshly while being humiliated were also common.   Rape of women and young girls was also reported.

Those who had repented, the so-called tavabin, were spared execution, but those who did not and would not accept their captors’ interpretation of the faith, were executed. “They have executed a hundred people so far. This is a religious trial. They ask about God, the Prophet, and Islam.  A ‘yes’ or ’no’ can determine life or death.”  We were astounded by the news,  speechless. The puzzle had been solved. A few simple yet difficult questions and answers would seal our fate: life or death.”  (page 137)

Iraj Mesdaghi, a former member of Mojadehin,  who survived and has written in great detail about the events that took place, writes:  “The massacre was supposed to be carried out in absolute secrecy so that the prisoners would not be aware of the execution process, the number of prisoners involved, or their own condition.”  (page 79)

“When I reached the Corridor of Death,  I saw Manouchehr Bozorg Bashar.  I had known him since 1983. I was so happy and excited to see that he was still alive.  As I did not expect to find anyone alive anymore, each time I saw a friend I felt great joy.”  (page 92)

Today, many of the families of the victims are asking for justice, not revenge.  They wish to bring all those responsible to trial with a jury and an attorney, something that they denied their victims.

The Iran Tribunal which was held at The Hague in June 2012 is one of the first attempts to bring to justice those who were involved in this crime while many have high positions and are living comfortable lives in Iran.  Witnesses came to speak, moving the audience and even the presiding judges and lawyers to tears.

In this informative and heart-wrenching book, Nasser Mohajer reminds all of us, while quoting Primo Levi, the famous Italian Jewish chemist who survived Auschwitz,  “It is imperative that we prevent the massacre from being consigned to oblivion. With history erased and this crime against humanity obscured from the gaze of current and future generations,  what was ‘perpetrated yesterday could be attempted again tomorrow.’”

The harrowing story of the summer of 1988 is a part of their history that all Iranians should become familiar with.  This book offers 450 pages of phenomenal documentation bringing out both heroism and inhumanity.

The idea that future generations have an obligation not to forget.

It is a must-read for all those who envision an Iran without torture and execution.

[In the Name of God, The Compassionate, the Merciful,]
As the treacherous Monafeqin [Mojahedin] do not believe in Islam and what they say is out of deception and hypocrisy, and
As their leaders have confessed that they have become renegades, and
As they are waging war on God, and
As they are engaging in classical warfare in the western, the northern and the southern fronts, and
As they are collaborating with the Baathist Party of Iraq and spying for Saddam against our Muslim nation, and
As they are tied to the World Arrogance, and in light of their cowardly blows to the Islamic Republic since its inception,
It is decreed that those who are in prison throughout the country and remain steadfast in their support for the Monafeqin [Mojahedin] are waging war on God and are condemned to execution.