Judge a book by its cover, but look closely before you do

It is quite an undertaking to find a photo that captures the essence of your book, and after nearly a decade of chronicling the history of the Green Uprising, I wanted to ensure that I chose an image that accurately represented it in Contesting the Iranian Revolution: The Green Uprisings (2020, Cambridge University Press).

When an author is writing a piece on the events of 2009, or a student group or an association is organizing such an event, they often include photos that showcase the immensity of the protests. Such selections visualize how millions of Iranians protested the supposed re-election of the incumbent, Mahmoud Ahmadinejad, and the state that ratified his “win.” Despite the initial inclination to do the same, I sought an image that underscored certain themes relevant to this history. When I finally came upon the photo that now covers the book, I knew without question that I had found the fitting image.

First and foremost, my research de-centers the Iranian state, its leadership, and reformist leaders, including Mir Hossein Mousavi, Zahra Rahnavard, Mehdi Karroubi, and Mohammad Khatami. Instead, I utilized a “history from below” or a “bottom-up” approach in favor of centering the women and men on the ground who were the principal agents of history-making. In fact, I focus much of this history on the role of women, which is why I connected to the cover image as it highlighted their involvement. 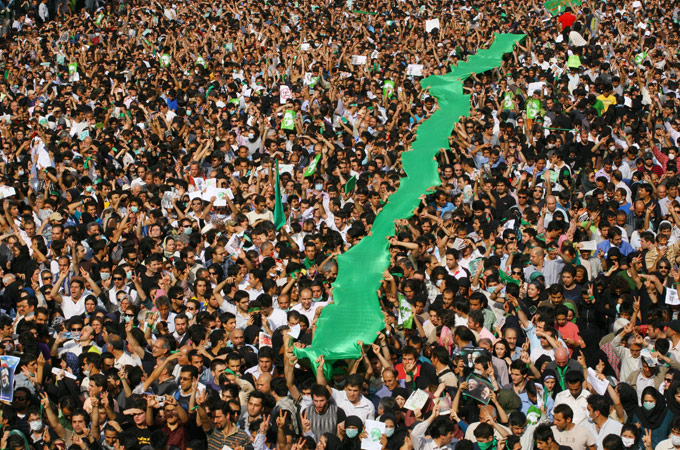 The faceless woman that graces the book’s cover indeed epitomizes the wider participation of activist women in every stage of this history, from campaigning in the run-up to the election and mobilizing against its results, to throwing themselves into melees to protect attackers caught by angry demonstrators, and providing the posterboy of the movement, who was not Mousavi but a “postergirl”—Neda Agha Soltan (d. June 20, 2009).

The anonymous woman is also wearing a chador, the full-body veil, which speaks to the second reason as to why this image fits well. There is this tendency to view Iran through the narrow prism that equates piety with support for the government, and secularism or irreligion with the opposition. These categories are too restrictive. In chapter five, for instance, I explore how clerics and laymen oppose the Islamic system in Iran in Islamic terms as a matter of saving religion from a state that commits egregious misdeeds in its name.

Mousavi is featured on the cover but he is not its central focus. While the opposition gathered under the cover of his presidential campaign and then morphed into a protest movement after the disputed election results, the uprising was about much more than him. In fact, it was multi-faceted and cannot be reduced to an explosion of reformist angst. In other words, it is one thing that many said “Where is my vote?” in the early days of the post-election crisis, it is quite another that by December they were saying “This month is the month of blood, Yazid will be overthrown; this month is the month of blood, Sayyid Ali will be overthrown.” In sum, the center of the cover is a woman who is wielding his image, but is doing so in a manner that conceals her identity, which I thought was telling as it spoke to the government’s crackdown after the June 12th vote—a crackdown that reached its crescendo during the bloody Ashura protests on December 27th.

That she wore green, the color of the campaign-turned-uprising, is also important. This was the first time in contemporary Iran that a campaign had adopted a color, which garnered the chagrin of the authorities who alleged that Mousavi was using his presidential campaign as a cover to launch a color or velvet revolution. Mousavi, a sayyid or descendant of the Prophet Muhammad, adopted the color of Islam as a means by which to affirm his Islamic credentials in the face of conservative attacks alleging that such reformists were committed to the destruction of the Islamic Republic from within.

Depending on who you ask, the woman is also raising a “V” that stands for “victory” or a peace sign, which attests to the non-violent nature of both the campaign and the subsequent uprising. The activists with which I spoke have said that the symbol can represent both—they claimed victory while also resolving to remain peaceful. The claim to victory was very much reflected in the research in counterintuitive ways, as I was able to problematize the claims that the movement was a failure. To be sure, it may have failed to abrogate Ahmadinejad’s election win and overthrow the state that ratified it, but the “history from below” approach underscores subtle but consequential victories.

The uprising appropriated the symbols of the system’s sources of legitimation, reprogrammed them, and leveled them with devastating ferocity to rob the system as a whole of its legitimacy. If, for stance, the Iranian government instituted Jerusalem Day in 1979, championed Palestinian liberation, and drilled an entire generation of Iranian youth raised under its authority in such justice-centered symbolism, then the state inadvertently sowed the seeds of its own destruction. Activists emerged on the first Jerusalem Day after the elections to use its symbolism to negate the polity. They either repudiated Palestine to challenge the state, or, more effectively, altogether co-opted such liberation discourse to accuse the Iranian government of being a “usurper” akin to Israel, and themselves as righteous seekers of justice in the vein of the Palestinian struggle.

By February 11, 2010, Revolution Day, the government succeeded in driving much of the movement underground. Yet, the victory of contesting the ownership and meaning of the government’s sources of legitimation, by appropriating them to deliver a debilitating blow to the system’s ideological foundations, has had lasting effects—an enduring victory that informs subsequent protests in Iran until this very day.

If there is an insistence to judge the book by its cover, as a couple of anonymous Twitter users did when I posted it on the eve of the book’s release, be sure to look closely. The cover is not about Mousavi, but the woman behind his campaign’s political poster. She and countless women and their fellow countrymen are the principal makers of this history—and the book situates them front and center.