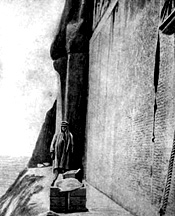 Sir Henry Creswicke Rawlinson, (1810-1895) a diplomat and an Assyriologist in Persia, was born on November 4, 1810 in Chadlington, Oxfordshire, England. He is best known for deciphering ancient cuneiform. Spending much time in the Near East as a British army officer, he had learned Persian and other Oriental languages.

George Grotefend accomplished the initial deciphering of the cuneiform in nineteenth century. Rawlinson, unaware of Grotenfend's work, attempted to decipher the strange shapes around the same time.

While there were many visible cuneiform inscriptions in Persia, most of them were very short — consisting of only a few characters. An inscription of considerable length was known to exist in the mountains between Hamadan and Baghdad. High up on a cliff of a mountain called Behistun, there was a panel of sculptured figures with many lines of cuneiform in the same three scripts, which were also inscribed on several other Persian artifacts.

Rawlinson helped reorganize the Persian army between 1835 and 1839, while studying cuneiform inscriptions, and translating Darius's Behistun message. With great risk of his life, he succeeded in copying most of the great Behistun inscription.

He began by assuming that the three different types of cuneiform writing read the same way. One of the three was simpler than the others. Its characters were less complicated in form and fewer in number. It appeared to be alphabetic while the others were more like pictographs, ideographs and phonetic characters.

Rawlinson began with the simpler of the two, which was found more often throughout Persia and possessed a hint of Persian dialect. Through his discoveries, he soon hypothesized the texts belonged to the period of the Archaemenid dynasty in Persia, of the Old Persian Empire (550-330 BCE).

The Behistun inscription was commissioned by Darius the Great of Persia around 519 B.C. It gave an account of how Darius came to the throne after the death of Cambyses and how he overpowered those who threatened to destroy the unity of the Persian Empire. This statement of Darius was widely known throughout his realm. One copy in the Aramaic language was found written on papyrus in southern Egypt.

Once the Persian text had been translated, it was possible to turn to the study of the other two languages. One was correctly assumed to be Babylonian. This discovery is very important to students of Assyriology since Babylonian and Assyrian languages were both Semitic and closely related.

The third type of language was called Median or Scythian. It was the most difficult of all. As Grotefend had guessed, it had a relation to the Elamite tongue, the language of Susa. It is completely unrelated to either Persian or to any of the Semitic languages and few artifacts have been found.

It was soon concluded that the cuneiform system had been used by many different groups for writing a variety of languages. Semetic speaking Babylonians and Assyrians used the cuneiform for hundreds of years, but later discovery has shown that the Sumerians were its inventors and were using it before 3000 B.C.

Rawlinson died on March 5, 1895 but his work on the cuneiform provided a breakthrough, which contributed greatly to both the science of Archeology and to the History of the Achaemanids and of the Persians. His undying devotion to deciphering the cuneiform was a great service to the study of the history of humanity.