Imagine you are walking in the street one day and feel a severe headache coming on. You tell yourself you have not experienced anything like it before. You eventually decide to go to a hospital. A brain scan shows signs of stroke. You are shocked, thinking strokes only happen to older people, not a healthy, active individual. 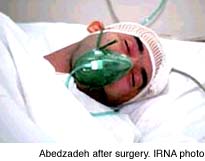 News that Iran's former national goaltender, Ahmadreza Abedzadeh, has been stricken by a serious stroke rippled through the Iranian communities around the world this week. Apparently during routine practice, the popular Abedzadeh experienced severe headaches.

After being shuffled from one hospital to the next, he was eventually diagnosed with a hemarrhagic stroke. He was quickly operated on by one of Iran's top neurosurgeons, Dr. Abbasiyoun. The drama can make for an episode of an Iranian version of “ER”.

Sadly for Abedzadeh and his family, this tragedy raises the question, How can this happened to an athlete in top physical shape? Could it be because of repetitive trauma to the brain, such as being struck to the head by a soccer ball?

Unfortunately people are not as aware about the danger and causes of strokes as they are about heart attacks. However, a stroke can be as serious, if not more serious, than a heart attack if not treated early or adequately.

There are basically two types of stroke, ischemic and hemorrhagic. An ischemic stroke occurs due to a blockage of one of the arteries that supplies blood to the brain. This blockage is usually caused by small plaques deposited in the lining of the arteries. Once these plaques break off, they may travel to the brain and block an artery.

Blocking an artery means the blood supply to a specific part of the brain is compromised. Lack of blood supply, i.e oxygen and nutrients, will eventually kill brain cells. Our brain is a delicate organ in that a blockage to any part could cause various problems. For example it could affect speech, perception or mobility.

So how can we prevent an ischemic stroke? We must do the same type of things we do to prevent the risk of heart attacks, mainly reduce the formation of plaque through diet and exercise That means eating less fatty foods which could harden the wall of the arteries and increase the risk of both strokes and heart attacks.

On the other hand, a hemorrhagic stroke is not caused by a blockage but the rupture of an artery, causing internal bleeding and damage to brain tissue. This may be the type of stroke suffered by Abedzadeh. The causes of this type of stroke are usually high blood pressure, infection, cancer, or head trauma.

Assuming that Abedzadeh does not have any of the known risk factors, could his stroke have occurred due to head trauma? Will repeated hits by soccer balls cause delicate arteries in the brain to rupture?

We know that hard blows to the head in boxing competitions cause this type of injury. Tough leather balls traveling at speeds of up to 90 kilometers per hour could certainly inflict damage. Recent research has suggested that young boys who play soccer are more prone to head injury.

Dr. Etminan is a pharmaceutical researcher at the University of Toronto. His recent findings on a new class of drugs that may prevent headache will be published in the June 2002 issue of the American Journal of Medicine.