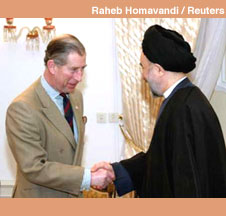 PRESIDENT: So my dear Prince Charles.
CHARLES: My dear president.
PRESIDENT: What brings you to Iran, twenty-five years after our glorious Islamic revolution?
CHARLES: Well, you threw out your king, one was wondering if the post is vacant, Iran could do with a strong monarch, and you might consider one for the role.
PRESIDENT: What about throne of England?
CHARLES: Mother is sitting on it.
PRESIDENT: She's a woman, knock her off.
CHARLES: Look, it's like someone in an air-plane loo taking a book in, not much one can do. (BEAT) So what do you think?
PRESIDENT: “Charles Shah of Persia” — hmm. The king must be a Muslim.
CHARLES: That can be arranged — I just need a throne.
PRESIDENT: But Princey.
CHARLES: Charlie, call me Charlie.
PRESIDENT: Okay Princey Charlie, we do have a Peacock throne which is empty. Perhaps you can use that while you are here?
CHARLES: I need something more permanent.
PRESIDENT: Pistachio.
CHARLES: I'm sorry?
PRESIDENT: Please take one. It's our national nut.
CHARLES: Yes of course. [CLICKS OPEN PISTACHIO] So, about my ascension to the throne — what do you say?
PRESIDENT: I say anything's possible.
CHARLES: So you might consider it?
PRESIDENT: I must consult the Ayatollah. When can you start?
CHARLES: Let's see, shopping centre in Preston next week, bus-stop in Ealing the next, I'm free after that.
PRESIDENT: Good. Now, out of curiosity I have one question.
CHARLES: This is no CIA plot. I assure you.
PRESIDENT: No, no. Tell me (WHISPERS) those men who came with you, one of them is James Bond?

CHARLES: (On phone) Mother it's Charles.
QUEEN: Charles! How's Iran?
CHARLES: Mother, I wanted to know if you'd consider being Queen of Persia.
QUEEN: Come on Charlie, what will you try next?
CHARLES: No mother, I'm there now, the Ayatollahs are happy for you to be Queen here.
QUEEN: No way Charles, imagine a crown on a headscarf.
CHARLES: Come on mother (TEMPTINGLY) Peacock throne.
QUEEN: Charles, if I want a pea-cock daddy's next-door.