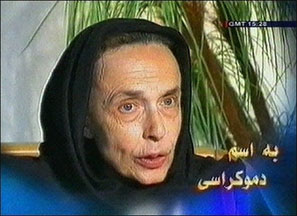 After spending weeks in detention and after being charged by the Iranian judiciary with “endangering national security through propaganda against the system and espionage for foreigners,” Dr. Haleh Esfandiari, the director of the Middle East programme at the Woodrow Wilson International Centre, and Dr Kian Tajbakhsh, an urban planning consultant with Soros Institute, on 18th and 19th July, appeared on Iranian state television. In the broadcast, the two individuals described their professional background and what was labelled as their “confession” by the state television. Two other Iranian Americans, Parnaz Azima, Radio Farda Journalist, and Ali Shakeri, a businessman working with the Centre for Citizen Peace, have been similarly detained and charged.

Detention and harassment of individuals, academics and NGO or political activists for expressing their ideas or promoting different cultural positions, are deplorable acts, regardless of the diverse contexts and vastly different dimensions in which they might take place, be it in the United States, Guantanamo Bay, Israel, the UK or any other place, including Iran. In addition to being abhorrent in their own right, such acts in a country like Iran which is threatened by warmongers in the west, also play directly into the hands of those determined to bomb Iran.

The Woodrow Wilson Center is funded by the US Congress and its activities and programmes in relation to Iran are sponsored by the Soros Foundation, which is believed to have been instrumental in instigating the “velvet” revolutions of the former Soviet-block countries. The Iranian Intelligence Ministry alleges in its communiqué that according to Dr Esfandiari “Soros Foundation has established an unofficial network … whose main objective is overthrowing the system.” The communiqué adds that “Although the short term objectives of the above mentioned foundations are mainly lined to their apparent activities, their mid-term objectives include a type of culture making …aimed at soft overthrowing of the system.”

These charges of “culture making” against the four Iranian-Americans, even if true, do not amount to a direct threat to Iran’s national security. Predictably and understandably, these acts have caused protests and outcries of indignation from diverse quarters, uniting the voices of individuals and organisations genuinely concerned with human rights and civil liberties with the disingenuous cries of the US warmongers and their pro-war Iranian Chelabis. It is not difficult to see how such unwarranted measures against legitimate democratic and civil rights, themselves, have the potential to create the conditions that could compromise Iran’s national security by endangering its unity in the face of an active foreign threat.

However, these charges must be viewed in the wider context of the lawlessness of American hegemonic policies in the Middle East and its stated strategy of regime change in Iran. In an atmosphere charged with threats of annihilation, externally through threats of war and internally through fear of disintegration and regime change, over-reactions to perceived threats are likely to occur, whilst at the same time pretexts for curtailment and suppression of legitimate democratic rights find a fertile ground.

Today, Iran is under military, economic and psychological siege. It is surrounded by American forces and air bases ready to launch attacks from neighbouring countries and beyond; there is a massive US naval build up in the Persian Gulf complete with menacing exhibits of war games; there have been warnings over a sustained period of time from military and intelligence experts of the imminent plans for bombardment of Iranian nuclear sites and military and economic infrastructure and its consequent catastrophic human and environmental ramifications; there is the economic and psychological siege through US driven sanctions designed to bring the country to its knees by fomenting chaos and hardship, the same kind of sanctions that killed 1.5 million Iraqis prior to the illegal US/UK invasion of 2003.

Iranian diplomatic missions are attacked by the Americans, and Iranian diplomats incarcerated and tortured, without any charges brought against them and with total impunity. Of course, none of these, nor George Bush’s blunt announcement of a “shoot to kill” policy against “suspected” Iranian “agents,” nor the maltreatment of Iranian travellers to the US, as “unpeople,” often harassed and incarcerated inhumanely, have elicited any degree of alarm and concern from those vociferous Washington and Washington-led advocates of democracy and human rights in Iran.

The fear and suspicion of “culture making networks” has to be viewed in the context of US’s “Iran Freedom Act” and its $100 Million plus funding as part of its strategy of regime change and the establishment of yet another client state in the region. The US funded “democratization” campaign is a destabilization project which amounts to foreign state intervention that is illegal under international law, the UN charter, and the existing bilateral agreements between Iran and the US. This domestic interference can blur the distinction between genuine NGO activities and externally sponsored regime change in Iran. This is a perception for which the US bears the primary responsibility. The impact of this on the genuine NGOs in Iran and on legitimate voices of dissent has been catastrophic for the fledgling civil society in Iran.

The US destabilization project, labelled “democratization”, has already turned violent and has the potential to kill many more Iranians. The American support for covert operations to infiltrate the domestic opposition and to foment ethnic and religious violence in Azerbaijan, Kurdistan, Baluchistan and Khuzistan are well-documented The US funding, support and diplomatic cover for known terrorist groups PJAK and MEK is an indisputable fact, not even denied by the Neocons. There is therefore an atmosphere of national emergency where the first victims are, predictably, the rightful and legitimate voices of opposition and the diversity of intellectual and cultural trends. Haleh Esfandiari, Kian Tajbakhsh, Parnaz Azima and Ali Shakeri are victims of this atmosphere of siege engendered by the US aggressive policy towards Iran.

However, these threats do not justify disregard for legal due process and the nature of the charges filed against these individuals. Repressive measures against civil liberties and human rights in Iran, do not serve Iran’s security and national interests, even in an atmosphere of impending war. These measures are divisive and would only serve to heighten the demonizing propaganda campaign against Iran and its historical identity. Such repressive measures play directly into the hands of the pro-war forces in the US and its pro-US client opposition. The neo-conservative instigated regime change can only find a likely appeal to a sense of resentment, discontent and dissent in Iran.

No matter how radical and provocative they seem to be to the establishment, non-conformist ideas and different cultural perspectives should only be countered through ideas and cultural dialogue, in an atmosphere of tolerance and respect for freedom of expression, and certainly not through harassment and detention of individuals or groups. The most effective defense against American hegemonic ambitions is achieved, not by curtailing and suppressing human rights, but by strengthening the unity of Iranian people, on the basis of safeguarding and guaranteeing their rights of democratic decision making and participation.�

Campaign Against Sanctions and Military Intervention in Iran (CASMII).�