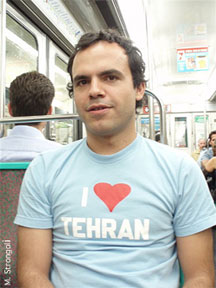 Less than a month ago one my favorite blogs, Editor: Myself, held by Hossein Derakhshan (aka Hoder) was first butchered and then shut down by its hosting company (Hosting Matters). After several days of camping here and there, hoder.com was settled in its new house and our attention was deflected to more important issues. Nonetheless, for the well-being of our blogging community, we need to ponder about some of the issues surrounding this event to prevent similar things from happening in the future.

For the reader who doesn’t know what is all the fuss about, the story started when Hossein posted an article on his blog about Mehdi Khalaji, a fellow of Next Generation at the Washington Institute for Near East Policy (check out the website to see what their activities are about), calling him a traitor for advocating regime change in Iran by means of economic sanctions and military intervention. Afterwards, Khalaji’s lawyers filed a complaint with the webhosting company claiming that Hossein’s remarks were “defamatory”. In the complaint they asked that all the “offensive” materials to be removed, a letter of apology to be submitted and a sum of $10,000 be payed to Khalaji towards the costs of his investigations! A series of emails were exchanged between Hoder and the Hosting Matters and eventually the blog was shut down. More details about what happened can be found at Hoder’s blog and elsewhere.

The moral of this story was that freedom of speech can only exist as long as the speech is in-line with the policies of certain groups. Otherwise, it is a source of trouble and better be silenced, even if it is in the price of false accusations. If you take the time to read Khalaji’s complaint, you’ll notice that the points he has raised are quite inaccurate and sometimes ridiculous. They are mostly based on mis-translations of Hossein’s original article and were only aimed at scaring the hosting company. In his defense, Hossein has recently written a detailed article pointing at all the inaccuracies in Khalaji’s complaint. Of course, he has the right to sue Khalaji, but that won’t change the fact that what has happened is unjust and very alarming. Let’s ask ourselves, who is in charge of defending the freedom of speech of a blogger?

Moreover, the attitude of the Persian blogosphere was quite appalling toward this event. Hoder has helped many bloggers to stand up and survive from the early days of Persian blogging phenomenon. It is utterly unfair that when now he is in trouble, very are offering a helping hand without mixing their personal agenda into the equation. How sad it is that we let our personal opinions about someone blind our sense of justice and drive us into silence and even worst, towards retaliation. Along his six years of blogging, Hossein, like many of us, has changed ideas and has evolved. He believes in things that once he condoned and apparently his new standing is not pleasing some of the so-called intellectuals. In his writings he uses a sharp language, he is bold, direct and he sometimes gets too passionate – in the sense, that he writes what he has in mind without thinking twice. Personally, I see no problem with any of these. What matters is that his postings are interesting and thought provoking.

Critics argue that Hossein is passing the line of free speech and he is accusing people left and right without basis. Where is the line of this “free speech” anyway, and who should punish the offender? As far as I know, we in the civilized world, claim that one can not take a gun and kill someone just because (s)he find them guilty. How is Mr. Khalaji’s approach different? I have no idea what the law says about bloggers who accuse others, but I guess the logical way would be to blog-back and get into a dialogue. If you don’t have time for this, then go to court but don’t take the gun yourself.

Although this Mafia-style game caused some trouble for Hossein in terms of forcefully changing a webhost and several days of adventures with Linux, but I am glad it happened. First of all an alarm was raised in the blogging community about how safe are controversial bloggers? Secondly, by his bullying tactics, Mehdi Khalaji damaged his “reputation” far more than Hossein could ever do. Thirdly, in the Persian blogging community, the true face of many solders of democracy was revealed. It is ironic to boast about how one loves democracy and free speech and yet in practice they act similar to totalitarian regimes.