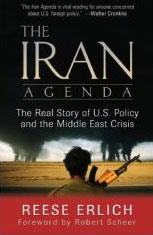 Journalist Reese Erlich grew up in Los Angeles just south of UCLA. As a child he used to walk up Westwood Boulevard toward Westwood village, past a stockbroker’s office and the Crest movie theater. At the time there was no Tehrangeles. The Westwood legal offices I visited last year to fix my Iranian passport mess used to house the ultra-right-wing John Birch Society.

As an aborigine of sorts, Erlich has no grievances against the Iranians who have colonized the Westwood of his childhood. On the contrary, he seems to delight in the cultural upgrade. His latest book, The Iran Agenda: the real story of U.S. policy and the Middle East crisis, should however give the American reader a nostalgic lump in the throat. Not because of old memories of a neighborhood now transformed; but because this seasoned journalist writes in a tradition now mostly abandoned by the US media. Trustworthiness.

Erlich identifies his sources by name, and gives references which independently corroborate his statements. By contrast the average American’s perception of Iran has been largely defined by “unidentified sources.” The Iran Agenda begins in the real Tehran bazaar where Erlich–along with actor Sean Penn and columnist Norman Solomon–had put their journalistic “boots on the ground” to report on the Iran situation. Erlich mentions other American reporters in Iran, but he observes, “Most American reporters I met saw Iran as an evil society and a danger to the United States.

While many expressed disagreement with President Bush’s policies, they believed Iran was developing nuclear weapons that threatened America. In short, their views tracked the political consensus emanating from Washington. Rather than proceeding from reality, they filtered their reporting through a Washington lens. When a Washington official makes a statement, even a false one, the major media dutifully report it with few opposing sources.”

Of course this is not news to we Iranians. The value of The Iran Agenda is its usefulness as a tool of argument in discussions with curious Americans who ask us to be their tour guides on the Iran subject. Most educated Iranians carry an overall knowledge of the Iran-US quarrel, from Mossadegh’s overthow, to the hostage crisis, to the US Navy’s shooting down an Iran Air passenger jet. The Iran-Iraq war, NPT, human rights violations, student protests, worker’s union discontent, Ganji, Ebadi, Ossanlou, are all swimming somewhere in our data base. But it takes a professional like Erlich to organize these floating facts into an engaging story with a strong moral. To undo years of skilful propaganda, equal skill is needed. And Erlich is certainly a talented story teller.

While he informs us that the Kurdish PJAK guerrillas are supplied by the US and Israel, Erlich simultaneously evokes a feeling of action and travel reminiscent of the colorful adventures of Tintin:

“The PJAK camps are located in inhospitable terrain. During winter months, the snowy roads are accessible only on foot or by tractor. Luckily the snow hadn’t yet blanketed the area, and we drove up easily — if slowly — over winding dirt roads. Suddenly, young women in green pants in the distinctive Kurdish head scarf were walking along the road. They were female guerrillas. PJAK claims its troops are almost 50 percent women.”

Erlich’s very brief history of the Kurds updated me on some interesting statistics. For example, I was under the impression that Kurds were mostly Sunnis. This is true in general, but in Iran 50% of this minority is Shiite. This figure makes a difference in my thinking on the Kurdish issue.

Erlich goes on to remind his readers of other ethnic minorities, the Azeri, Baluchi and Arab Iranians, who could destabilize the Iranian regime. Little of this is intelligently discussed in the US media. For obvious reasons even the Iranian media tend to keep the lid on news of ethnic unrest.

Not all of Erlich’s criticism targets mainstream media. He has harsh words of advice for Iran’s exile media in his native Westwood backyard. He mentions Amir Taheri‘s infamous false report about a Majils law requiring Iranian Jews to wear a yellow stripe on their clothing. “With each phony or exaggerated story,” Erlich warns, “the LA newscasters and commentators [who continued to play the story long after it was falsified] think they are helping the popular struggle against the Iranian government. But repeated over time, the distortions discredit the exile media and, by extension, all exile opposition.” Erlich describes another, bitterly funny incident — the Hakha affair — as being “something right out of the Keystone Kops.” I can’t find a web link that explains this fiasco nearly as well as Erlich’s narrative.

Clarifying his own agenda in writing The Iran Agenda, Erlich says, ” … I personally don’t trust mainstream politicians, lobbyists, and think tank gurus to resolve anything soon. Nor do I trust the clerics in Tehran to stop their belligerence. A pro-peace, pro-democracy movement exists within Iran. I think people in the United States need to build one as well.” It seems Westwood had earthy, smart people long before Iranians arrived.”