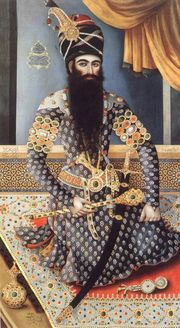 There have always been lots of talk about Iran’s present, and past, sizes. Which size is the true size of this country, or empire, called Iran, or Persia as it used to be called internationally? Iranians seem to feel sorry for having lost large territories that used to belong to the Persian Empire. Many Iranians blame the Qajar for having lost the territories.

Others hate the Arabs for having invaded the Sassanian Empire some 1300 years ago, for having started it all. There are many Iranians who blame almost everybody for Iran’s present size, from its past rulers to its neighbours, and to Western powers in general. There is a lot of myth to all this contention and lost pride!

Many Iranians who blame the Qajar for having lost territories to Russia or Britain of that time do not think about a few really important things. Actually it was Agha Mohammad Khan Qajar and his ruthless expanssionist wars that united that same Iran these folks today take pride for, while saying that they hate him because of his brutal treatment of subjects.

At that time (just before the Qajar) there was no big Iran any more, but pretenders, various factions who were fighting for control of what was once ruled by Nadir Shah Afshar, and before, by the Safavid. There were no boundaries for a country called Iran, Godly or manly named, ordained, or certified, easily visible from the moon, or from anywhere else.

It was the same brutal and ruthless Agha Mohammad Khan Qajar, the man these hypocritical nationalistic Iranians seem to loath, who created the last big, great, or imperial Iran. Either they should hang Agha Mohammad Khan’s picture on their walls as their hero, easily visible whenever they enter their homes, or they should stop naively talking about a just and great Persian Empire that the corrupt Qajar rulers lost to Russia, Britain, and others.

Where was that Iran, that great, huge, Persian Empire, that some incompetent rulers lost to others? Historically there have been numerous times when one empire after another has fallen, and risen, within the territories of the Iranian plateau. Some of these empires have grown very large, while others have hardly been called a country or an empire, and some have even failed to appear in history books, or any books for that matter.

There have indeed been many times, more recently and historically relevant, during the Safavid and the Qajar, when the empire seemed to get on its feet again and become feared and respected by others (these, fear and respect, especially fear, are what nationalistic Iranians nostalgically refer to, knowingly or not), but these revivals were achieved by some ruthless rulers who for the sake of power sacrificed anything any modern civilisation holds dear. These ruthless rulers, whether more recent or not, did not ask anybody whether they wanted to join the empire or not. They just went over them, and so a large empire was born, born out of blood, injustice, and tyranny, before and after Islam.

The Qajar lost territories to the Russians and the British around the same times when the Ottomans were also heavily engaged in losing territories to Russia, Britain, France, and also newly revived local Muslim or non-Muslim rulers. And at the end the Ottoman Empire, though more powerful than the Persian Empire of the time, was in risk of becoming far smaller than the Turkish Republic of today.

Iran was luckier (during the 19th century when Western Empires were furiously expanding), especially because of its geographical location, where world powers of the time usually reached the Persian cat when they were already exhausted in their battles to the west, so they usually did not bother that much to give the cat the real squeeze they were giving to their more immediate neighbours and rivals.

So, the result has been that what was left of the Persian Empire was bigger, at least in size, than what was left of the Ottoman Empire. No matter how competent any Muslim ruler of the time would have been, they would be no match to the neighbouring world powers to the West. It was another age for them, and it was a much older age for the empires of the orient. The Middle East had not gone through the industrial revolution and no matter who ruled they were destined to be chopped, humiliated and walked over, and if lucky, at best ignored.

Let’s not forget that Iran’s total surrender to Western powers did not come during the Qajar. Reza Khan, with all his efforts (some successfully) of modernisation, did not stand the slightest chance confronting Britain or Russia and he was swiftly removed from power and replaced by his son. That was the first time in Iran’s history when a local ruler was directly (his father was chosen by the British in a more subtle way) chosen by foreign powers. The same thing happened again, when the same man was brought back after a US-orchestrated coup in 1953.

The shrinkage in Iran’s size in its modern times has had little to do with Iranians. It was a result of dramatic changes in the world, where Muslims did not (still have not for a large part) embrace modernity, and were left at the mercy of whoever came by.

Another serious issue is to think how many of those who belonged to the Persian Empire in the past want to come back to what is left of it now? And if any of them ( maybe just individuals within those areas) would want to be part of Iran it would only be for having a share of the oil, and not for nationalistic purposes or anything alike. And in case they have more oil of their own, or if they are doing better from a material or even social point of view, they would prefer their own tiny and irrelevant country rather than a big, poor, undemocratic and messy one.