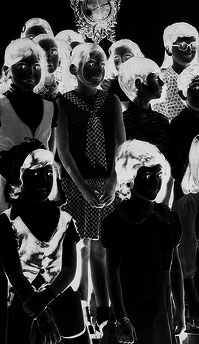 My memories of my childhood are mostly vague but still I can remember being on the playground of my old school; while other children played hide and seek, I was only hiding, trying to make certain nobody would ever find me. I knew they hated me as much as the teachers liked me.

I was the one with all the answers.

I used to read as many as books I could to maintain my status of a nerd; I was transforming into a huge, mute, lonely devourer of words, and still hungry for anything real.

“With each book you read, you’ll grow,” Father used to say. “In my time, I didn’t have this chance. I’m sure you will not disappoint us.”

But I was already the finest replica of any parent’s dream. Maybe that’s why I felt like a giant or a monster, holding inside me the weight of awareness nobody else cared to carry.

My father, a high school Algebra and Geometry teacher, had always longed to be someone else, and his quest for knowledge became mine. Then one day I discovered I was peculiar in others’ eyes. It just happened in one definite moment.

I was 15, and it was my first day at a new high school. The teacher, a young man with attitude, brought up the subject of the well-known paradox of Zeno; he wished to know if any of us knew about it. This was an easy problem, but to my surprise nobody dared to raise their hand.

I was sitting in the last row, leaning back against the wall. I waited and looked around, perplexed to discover that nobody else had read Aristotle. The look on teacher’s face told me he was going to slam the whole class; he was going to tell us how stupid we were.

But I didn’t appreciate this assumption, so I raised my hand.

All eyes turned to look at me.

“Achilles would have easily caught the tortoise if Zeno had considered the factor of time in his argument,” I said. “In this paradox, Zeno focuses primarily on distance, but motion is a result of both distance and time.”

Our teacher nodded without a smile.

“Achilles shouldn’t have given up so easily,” I said. This was my last touch, a little mockery. I heard the confusing giggles of the girls, but I maintained my serious posture. “Would you like me to write down the formula on the board?” I asked.

The teacher frowned and stepped closer to me. “No, I’ll do it myself,” he said. “Now you may sit down. Thank you, Miss…” His voice was barely audible. “What’s your name?” he asked, his attitude obviously apathetic.

Everybody remembered my name, I thought.

I had become the center of their attention, but at the same time, I was moving beyond their reach, vanishing before their eyes. Unapproachable like a paradox.

They would never be my friends, I thought, succumbing to the illusion of power that also imposed a sense of solitude. My new world – a world of abstractions, composed of what I knew and others either didn’t know or didn’t care to know – bounded me inside its thick barrier.

Gradually, from that day on, I turned into a shadow. A ghost. The ghost of my father’s impossible dream. I knew I was untouchable like a ghost, invisible like a dream.

The war broke my walls to pieces. The war ejected me into a world of flesh and blood. The war exploded my existence into something noticeable as if it had eyes of its own and could follow me everywhere, even inside my closet where I hid while army guards, patrolling our neighborhood, yelled threats that they would shoot at my window, That I must turn off the lights. Suddenly everyone was aware of my existence. As if they could see me. As if I had turned visible again.

Had I become like everyone else? Or was it the world surrounding my room that had transformed itself into a place of paradoxes, a place where each person had turned into a frightened monster hiding in the dark?

I would never forget that night; the first air raid on Tehran.

The electricity was cut, and the whole city of Tehran went dark. To fit in the narrow, deep, messy, and dark space of the closet, I curled into fetus position, taking with me a flashlight and some candles in case I ran out of batteries. My closet suffocated me and my clothes hung against my face and the smell of old shoes and dust reminded me of something dying. If I stretched my arms, I could touch both walls of the closet, and if I stood up, I could reach the ceiling with the tip of my fingers.

No longer could my heavy books of philosophy offer a meaning to me, as I sat on the cold floor of the closet, staring at the words, without understanding their significance. Repeatedly, I read the same paragraph, the same line, the same word, gazing at the space between lines. I drifted into a world without a beginning and without an end, a senseless world without a direction or purpose.

I missed the ordinary life.

But I knew. If I opened my closet door, I could have only found the darkness there.

I waited for the sirens announcing the arrival of the Iraqi MIGs. I turned off the flashlight to let my closet float in obscurity.

I could catch any sound.

The sound of melting candles, and the fall of spiders, the walk of insects along the line of the darkest corner of the closet and the whisper of the dust dancing in the air to imitate raindrops. I listened to the buzz of hungry mosquitoes searching for blood, the sound of the moon shining cold, and the hum of growth of the trees in the yard. I became part of the history, hearing the whizzing noise of gas touching naked skins, the breathings of unborn children bonding with grieving mothers, the beats of stones thrown at innocents, and the gasps of scared monsters hiding behind me in the closet.

Once the raid was over, I left the closet and opened the window to let the breeze touch my face. From afar, out on the horizon, I could vaguely recognize an invisible shadow; like a black sunrise.

It was the only thing that never let me down.

The sun always, always rose from behind the dark walls of the city.