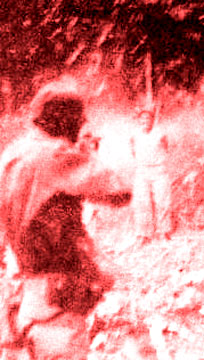 The Persian version of this piece, “nemitavanam bebakhsham”, was written on October 31, 2002, published in Shahrvand (Toronto) and Kayhan (London) as well as my book I “Am Iran Alone and Thirty-Five Other Essays” (man khod Iran hastam va si-o panj maqaaleh-ye digar) Afra/Pegah Publishers, Toronto, 2006.

No! I cannot forgive you. I was her husband and comrade, and now as an heir, I cannot shrug off this murder. Ask her to forgive you herself. Go to Infidel Cemetery and find her unmarked tomb by pacing eight steps from the gate and sixteen steps against the wall; call out her name; say that you regret killing her, and beg for her pardon.

Perhaps after twenty-one years she will stand up again, rub her heavy eyelids, and look at you. You will notice the bullet wound in her chest, and remember that cold day in January, when the prisoners were brought forward, blindfolded. They were fifty-two individuals: two women and fifty men.

You aimed and shot her and saw that she fell down. Did you ask yourself why you were killing her? In the name of God and the Islamic state? Khomeini endorsed her death warrant; the head of the judiciary added her name to the list on death row; the Islamic judge announced her sentence; the jailer tied her to the torture-bed; the interrogator cornered her with his questions; an Islamic republican guard carried her from the hospital to the prison; and a man in Aria-Shahr called the local Islamic police committee to come and capture her who, while fleeing, had jumped down from a wall and broken her pelvis. You are still looking at the bullet wound, remembering when you put her cold body into a plastic bag and threw it into the mortuary truck with other corpses to be brought to Infidel Cemetery; and the Islamic republican guards hastily buried them in a mass grave without any stone tombs.

Then you will hear her voice asking you, “When you came to arrest me did you show me a warrant? Did you let me have an attorney at the time of cross-examination? Did you bring me before an open court with a jury and let my lawyer defend me without fear? When the prosecutor charged me, was his indictment based on true and objective facts, or forced self-incrimination and false testimonies? Was my sentence fair and proportionate to my alleged crime? Did I have the right to appeal?” Now, tell me what your responses are to her questions.

Without justice how can one speak of the right of heirs to pardon? Reconciliation is possible only when the mass graves are uncovered and the process of seeking justice begins, the roles of those who have participated in this crime are determined, and each person receives a fair sentence accordingly. Pardon prior to justice leads to forgetting the injustices in the past and yielding to more injustices in the future. One who remains indifferent toward yesterday’s cruelties becomes an accomplice to today’s crimes.

How can I, as the survivor and heir to my wife Ezzat Tabaian, executed on January 7, 1982 in Evin prison in Tehran, forgive the crimes of the participants before her murder is investigated by an independent grand jury? Who are these collaborators? One who endorsed her death sentence; one who gave the verdict; one who tortured and interrogated her; one who instigated her arrest; and the one who, on that snowy day in January, put a bullet in her chest. They all have dirty hands. Each is responsible for his act, despite the fact that these men are products of an outdated ideology that justifies their brutality. They should be tried in an open court with juries and lawyers and be held accountable for their crimes so that justice prevails. Only then can one ask the heir if he is willing to pardon the criminals.

No! I cannot show magnanimity and generosity because no independent court has been created yet to indict and condemn the criminals so that I can ask for their pardon. Reconciliation prior to the process of justice would mean forgetting the agony that my wife, Ezzat, and thousands of other women and men went through because of their beliefs, and approving other similar injustices that are currently being committed in my homeland.

No! I cannot forgive. Not because I advocate revenge; quite the contrary. I believe that pledge for justice differs from vengeance for bloodshed. An avenger of murder merely wants to satisfy his personal anger and does not care about the social consequences of his violent act. One who seeks justice should not take matters into his own hands, but find a competent third party, that is, an independent court capable of making an objective judgment about a committed crime without violating the rights of the accused. Revenge and retaliation derive from tribalism and completely differ from the independent judicial system of our era. In modern law the goal is to rehabilitate criminals and prevent crime. But in religious retribution and tribal retaliation the objective is an eye for an eye.

Neither revenge and violence, nor amnesia and submission to tyrants! A murder is committed and needs to be reviewed by an independent court. Until that time, I, as the widower of the murdered, have no right to forgive you. Go to Infidel Cemetery at Khavaran Road, Tehran. Find the burial site of my wife among the other graves in that place of grief that has greatly expanded over the past twenty-one years. Tell her that you are regretful of the crime committed against her, and that you agree to appear in front of an independent court. Then look around. Perhaps you will see me next to her grave.