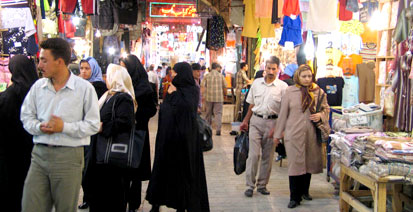 “Zerangi” in Persian can be loosely translated as “cleverness” and to be “zerang” is to be “clever”. Most, if not all the time in Iranian culture and society, a zerang person is seen in a positive light for he or she is intelligent, resourceful and independent/autonomous and is thus what most Iranians strive to be. To be a zerang person can be applied in many situations, both positive and sinister. For example, a person who knows how the American legal system works and is able to work it to his or her advantage is zerang. A person who is resourceful in business and has made something of himself/herself is zerang. However, a person who is able to cleverly cheat his taxes and screw the system and government is also zerang. It does not stop here; a person who is able to wittingly cheat people, companies, businesses, governments of money is zerang and an idol for many Iranians.

In this essay, I wish to focus on the darker side of the culture of zerangi in Iranian society. The reason why I am writing this is because this one aspect of our culture is probably the most destructive phenomenon that our country and society is facing today. It would be quite silly to say that this phenomenon is restricted only to Iran and Iranians, but on the contrary many other cultures and countries share this problem; however, this does not give us a license to ignore the dangers of this trend.

In East Asian countries, especially China and Japan, corruption is (generally) seen as something abominable both outwardly and inwardly. There is no duplicitous approach to it where you outwardly say it’s bad but internally wish you were clever enough to do it. I remember not too long ago, the BBC reported that a Japanese official was caught in a corruption scandal and the shame was so immense that he had to commit suicide. In fact, it seems that despite the heavy Westernization of East Asian society, some of these shreds of honor have still survived. A person who is honest, hardworking and works for the betterment of his society as opposed to himself only is glorified and praised. However, one who is individualistic is looked down upon. This notion is best reflected in my opinion in the famous Japanese expression; “the needle that stands out gets hammered down”. One who is caught in a corruption scandal is so embarrassed that suicide is his only option to regain his family’s honor. Obviously not every single corrupt person is going to commit suicide, but this phenomenon is widespread and the cultural message is clear: the honest is glorified, and the corrupt is dishonored.

Sadly enough, Iranian culture, at least in the past 50 or so years, has become the exact opposite. I remember one time where one of the Iranians here was not only able to cheat the Canadian tax-system, but also cheat his company’s money. Instead of being condemned, various Iranians rushed to be his friend and to learn his clever tactics. He was admired and glorified as zerang and all the women tried to get their husbands to be friends with this Mr. X. I would see wives putting their husbands down and saying “boro az oon X yaad begir, mibini che ghadr zerange?” (Go and learn from Mr. X, can’t you see how clever he is?). One might immediately say that this is the fault of the mullahcracy of Iran, however most of these people have been out of Iran since the early 70s and have not returned to Iran ever since, therefore the problem is much deeper as you will see.

Another trend that is part and parcel the culture of zerangi is the absence of personal-accountability. It is a given that none of the higher echelons of the IRI are held accountable, however I can say that a great bulk of Iranians do not hold themselves as personally accountable either. It is never our fault, it is always “others”. The Mullahs blame Amrikaaa and a bunch of Jews over a 100 miles away, the Marxollahis will blame the Shahollahis, and the Shahollahis will blame the Hezbollahis and Mullahs, but none will hold themselves accountable. I once asked a fellow Iranian on why there is so much corruption in Iran, the reply was “Vell u know, it iz de Akhoonds, u know, like de Rafsanjaniiiii, dey take de money ferom Iraaan, and buy de eye-landz all ovar de vorld”.

This type of talk is wide-spread in Iran and it is dangerous as I will argue. The basic idea is that all of our problems are sourced in Islam and Mullahs. 1400 years ago, we were all cultured, tall, blond, blue-eyed and spoke something similar to German until the Arabs came and screwed us, made us short, dark and hairy. After this, mullahs were created and everything that point on messed up.

The idea is that mullahs come from another planet and have nothing to do with Iran and Iranian culture. Thus the blame is shifted on them and we are all innocent of all their crimes and corruption. As fanciful and ridiculous this sounds, this is the type of mentality many Iranians adhere to. Just how Mullahs ignore internal problems and externalize them to some Arab-Jew conflict 1000 miles away, Iranians in and out of Iran blame our national and cultural problems on them. Yes on many issues they are to blame, but the fact is that Mullahs did not all-of-a-sudden drop off from some Alien ship to brainwash and rule Iran. Mullahs are Iranians just like you and me, except with a turban. Just as an Iranian nurse studied health and wears nurse clothes, an Iranian mullah studied Islamic law and wore a turban and flashy robe. They were born and raised in Iranian culture, speak Farsi, Azeri, Kordi or what not, use our expressions, eat, sleep and die. All in all, Iranian mullahs were produced by Iranians and Iranian culture and are distinct from all other classes of clergy around the world.

Now some may misinterpret me as justifying the acts of the ruling Mullahs – I am not and I believe that in Islam we do not have clerical classes, these are all recent creations and they should go – but this is a discussion for another essay. What I am arguing is that our problems are deeper than this; the problem is cultural. 95% of the people working in the IRI government are people like you and me, lay-people. Mullahs are no different than us; they are part of this culture of zerangi. The problem is not that a Mullah becomes a thief, but it’s the exact opposite; it is a thief who becomes a Mullah. We Iranians, although outwardly criticize corruption, internally glorify it and wish to master it. When we attack Rafsanjani for being a thief and corrupt, we may outwardly oppose him by saying it is wrong, but internally we are jealous of him, we admire him and wish we could take his place. Whenever there is an opportunity to make easy money through corruption we all rush to it. At one point, it was to do it with the British, at another, it was to do it with the Russians and at another, it was to become a Mullah.

My point is this: during the Shah’s time, we blamed all of Iran’s problems and corruption on the Shah. We thought that after the revolution and kicking out the Shah as well as having Mullahs come to power, everything would be ok and all our problems would be solved. The problems however did not change and got worse and now we fantasize about kicking out the Mullahs and bringing the Shah’s son back, or just bringing another order that doesn’t involve turbans. However, the underlying issue is that we do not hold ourselves accountable, we bribe and take bribes, cheat others and the government of money and when we are successful at it our society calls us zerang. When this problem becomes pervasive (as it is now) and the whole government and system collapses, the same zerang people blame the Mullahs.

The problem however is even sadder. Growing up and observing my community, I have also come to notice that those brave and pure Iranians (Muslim, Bahai, Jew, Atheist or what not) who are honest, don’t lie, keep to their word and refuse to cheat and steal in order to make quick money are seen as “saadeh” (naïve) at the best, but generally khol (stupid). However, the corrupt is seen as zerang, someone intelligent, independent and successful (note that the unsuccessful ones are seen as idiots); someone to look up to, learn from and be friends with. If he is criticized and attacked outwardly, it is usually not surprising to find out that the person who is criticizing is just jealous wishes he or she was like him or her.

In conclusion, as long as we don’t face the root of the problem and just merely look at the leaves of the tree, we are NEVER going to solve this problem of corruption and it will keep on getting worse and worse, long after the Mullahs are gone. We need to be personally accountable, the IRI is the tip of the iceberg, the true reform and change lies in our culture. I know that this essay might not be taken positively by some people here and will say “you are a agent ov de mollaz, de perobelem iz de eslam and mollahs, Rafsanjani pay u to write dis kerap”. This however is exactly the problem, as long as we don’t see the core of the issue, as long as we are not personally accountable, as long as we believe in fairy-tales and blame classes and abstract theologies, I don’t see any prospective of Iran getting anything but worse, even after the Mullahs and turbans are gone.