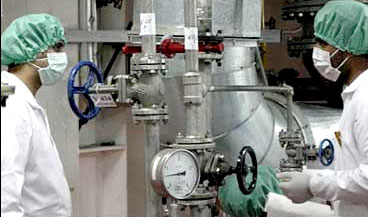 Below, please see an op-ed that Anatol Lieven and I published in the International Herald Tribune on the need for real red lines with Iran that are rooted in international rules and that enjoys the support of not just the EU, but Russia, China and India as well. Essentially, we are arguing that a nuclear armed Iran can be prevented if we begin treating the NPT as an asset rather than a burden and shift our bottom line to “no nuclear weapon” rather than “no uranium enrichment.”  — Trita Parsi

The Bush administration’s decision to open direct contacts with Iran is to be welcomed, but precisely because it marks such a break with previous U.S. policy, it also carries a great danger. This is that hard-liners in the American and Israeli governments will treat this Western proposal as a last chance for the Iranians, to be followed by an attack if Tehran fails to accept it.

Meanwhile, it is already clear that much of the Iranian establishment interprets the latest Western conditions not as a final red line, but as yet another pink line, a vague basis for further negotiations. In consequence, it is unlikely that the Iranians will agree to a complete suspension of uranium enrichment within the six-week deadline set by the West.

Apart from anything else, Iranian leaders know that as long as they stop short of weaponization, neither the Europeans nor much of the U.S. uniformed military will approve an attack on Iran, with all its potentially devastating consequences for Western security. An attack will open up disastrous splits not only between the United States and Europe, but possibly within the U.S. security establishment itself.

If we in the West are to set a genuine red line that the Iranians can recognize as such, two interlinked things are necessary. This line needs to be rooted in international rules that the Iranians themselves have formally recognized, and it needs to have the full support not only of the Europeans, but of the Russians, Chinese and Indians as well.

In other words, our red line must be strict, verifiable adherence to the terms of the Nuclear Nonproliferation Treaty, or NTP, accompanied by a list of detailed, concrete and severe sanctions that leading members of the international community undertake to impose if Iran breaks the treaty and moves to weaponization.

The nonproliferation treaty – with all its flaws – must therefore be treated by the West as an asset rather than a burden.

According to Hans Blix, former director general of the International Atomic Energy Agency, the idea that Iran’s past violations and secretiveness has canceled out its right to uranium enrichment under the treaty is a “thin legal argument.” Even officials of the U.S. State Department are privately beginning to admit Iran’s right to enrichment, and the dead end into which the current strategy has led the West.

On the other hand, the nonproliferation treaty does provide the West with a very strong legal ground to pursue what should be our red line: to place a verifiable cap on Iranian enrichment and other nuclear capabilities well short of weaponization.

This is a red line that all states of the UN Security Council agree on, and which Iran itself has always said that it accepts. Through the NPT, Tehran can be held to its own oft-repeated position that it does not want weapons and that its program is for peaceful purposes only.

Russia, China and India all strongly dislike being forced to support what they regard as unilateral and illegal American pressure on Iran, but equally, strongly oppose Iran developing nuclear weapons.

The NPT therefore gives the West a strong basis on which to go to these countries and say: We will go back to the letter of the nonproliferation treaty and allow strictly limited and inspected Iranian enrichment if you will sign a binding international agreement setting out in public, in detail and in advance the sanctions that you and the other signatory nations will impose if Iran moves toward weaponization.

These threats should include removing Iran from all international organizations, ending outside investment, imposing a full trade embargo, ending – as far as possible – all international flights to Iran, and inspecting all transport headed to that country.

By way of an additional incentive, Russia or China might be allowed to appear to take the diplomatic lead in this mater, boosting their regime’s international status and domestic prestige.

On the other hand, Russia in particular should be clearly warned that if Iran did weaponize and Moscow failed to impose the sanctions that they had promised, the results would be an increase in anti-Russian policies by the West across the entire spectrum of our relations.

Such a deal is the best that we can realistically hope for. The Iranian establishment has talked itself into a position where it would be virtually impossible for Tehran to abandon enrichment altogether.

As for an attack on Iran, this would at best only delay the Iranian program, while catastrophically undermining American efforts in Iraq and Afghanistan, and indeed the entire U.S. position in the Muslim world. A settlement along these lines, on the other hand, would prevent Iran from developing a nuclear weapon and open the way for a resumption of the aid that Tehran provided in 2001 against Al Qaeda and the Taliban, which we badly need and which the Bush administration spurned.

ABOUT
Anatol Lieven is a professor at King’s College London and a senior fellow of the New America Foundation in Washington. He is co-author, with John Hulsman, of “Ethical Realism: A Vision for America’s Role in the World.”  Trita Parsi is the author of “Treacherous Alliance — The Secret Dealings of Israel, Iran and the U.S.“, a Silver Medal Recipient of the Council on Foreign Relations’ Arthur Ross Book Award, the most significant award for a book on foreign affairs.