The Guardian Has Spoken 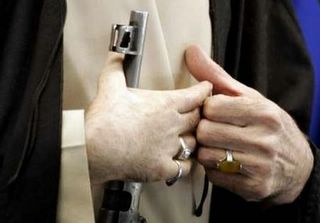 Have you ever wondered why having a Vali-e Fagheeh at the top of Iranian power pyramid is an irrefutable and direct violation of the human rights of more than 70 million Iranians? Let’s examine the latest manifestation of this violation.

An ill-qualified President appoints his completely unqualified friend to a post as his Deputy in his cabinet. Despite his lack of qualifications and the many blunders he has had along the way, this man tells reporters last month that “People of Iran have no problems with people of Israel.” While many Iranians actually agree with Mr. Moshaei’s statement for a change, this creates a row bigger than any seen in IRI history for a regime that has done nothing but to promote hate and hostility towards the state of Israel for the past three decades.

The Supreme Leader finally steps in to support the President and his Deputy. Let’s read an excerpt from today’s International Herald Tribune to see how Mr. Khameni handled the situation:

“Mr Khamenei was urged by many clerical politicians to intervene in the Israel dispute, and he made his comments on Friday only 24 hours after the president had backed his deputy.

“Opponents of Mr Ahmadi-Nejad, whether conservative or reformist, are staunch supporters of Palestinians and were apparently outraged by Mr Mashaei’s comments. But the controversy was also used to put pressure on Mr Ahmadi-Nejad ahead of presidential elections next year.”

“Mr Khamenei on Friday urged all political groups to avoid creating tensions over what he called “nonsense” issues.”

“Destroying the government and officials is not right… and what is said about economic problems is unfair,” he said, referring to criticism over the management of the economy and the spiralling inflation.”

Pay close attention to how in two sentences, Mr. Khamenei stated his position, “we,” the Iranian government, the “system,” and the [Iranian] “nation,” completely ignoring the Iranian nation’s daily struggles with a worsening economy and any hopes they have of diplomatic gestures to alleviate the mounting international pressures on Iran.

Aside from the validity of this statement vis a vis the subject at hand, can anyone in the Iranian government be farther from knowing what the Iranian nation really want these days? Yet, Mr. Khamenei has ultimate power to state the position of a nation of 70 million by virtue of powers he holds mostly in his capacity as Vali-e Fagheeh, the all-knowing Guardian of a nation.

A nation of over 70 million people is considered incapable of making decisions about matters which threaten their very existence and livelihoods, leaving it all in the hands of their Vali, their Guardian.

Mr. Khamenei may have intervened yet again to protect his ill-qualified man in Saad Abad, but in doing so he has reminded everyone what a parody of a democratic system Islamic Republic of Iran really is. Next time you hear western analysts refer to Iran’s democratic system of elections and law-making, rememer to cite this little incident, won’t you?