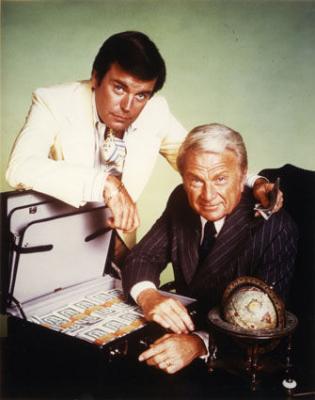 The Cops & Robbers TV Series, SWITCH aired on Iranian National TV in early 1976 to late 1977. It was highly popular thanks to its iconoclastic cast. The series focused on two main characters, Frank MacBride (Eddie Albert), a retired bunco cop who once arrested Pete Ryan (Robert Wagner), who was a con man before his trusted crime-fighting partner. After Ryan’s release, the two open up their own detective agency in Los Angeles that specializes in “out-conning the cons” by using the same sorts of double-crosses and deceptions used by con men in order to capture criminals. Assisting them is another former con man of Frank’s, restaurant owner Malcolm Argos (Charlie Callas), and Maggie Philbin (Sharon Gless), Frank’s and Pete’s young receptionist who helps them out in each of the cases. I got to see the series in France too where it was a hit like an American Version to the Excellent Persuaders with Roger Moore and Tony Curtis.

I particularly Remember this epilogue to an episode which takes place during a Sea Cruise in which expert playboy Robert Wagner explains to Eddie Albert how he unmasked a beautiful Women turned criminal who was actually a male transvestite. Fortunately Wagner’s beautiful  real life Wife Nathalie Wood wasn’t far … ;0)