WORLD READY FOR A BLACK BOND ! 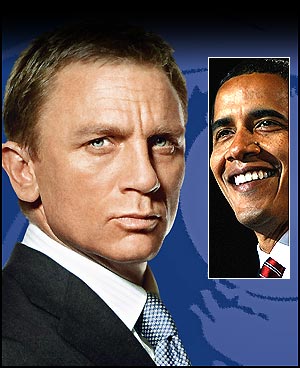 The actor said Senator Obama’s historic triumph to become the first African-American US president suggested the time was right for a coloured man to play the world’s most famous secret agent, according to London’s Telegraph.

“After Barack Obama’s victory I think we might have reached the moment for a coloured 007,” Craig was quoted as saying.

“I think the role could easily be played by a black actor, because the character created by Ian Fleming in the 50s has undergone a great deal of evolution and continues to be updated.”

However, the idea might not be well received by Fleming, Craig said.

“I think he’d probably turn in his grave … [at the thought of a black Bond],” said Craig.

Fleming was not known to hold liberal views and his books were laced with the racial prejudices of his era, the paper said.

A chapter in Live and Let Die, for example, is titled “Nigger Heaven” and describes a room in a Harlem club in which the “air was thick with smoke and the sweet, feral smell of two hundred negro bodies”.

“Obama would be the better Bond, because, if he’s true to his word, he’d be willing to quite literally look the enemy in the eye and go toe-to-toe with them,” he told American magazine, Parade.

“McCain, because of his long service and experience, would probably be a better M. There is, come to think of it, a kind of Judi Dench quality to McCain.”

Despite Craig’s endorsement of Obama, not all was harmonious between those in politics and those involved in Bond films, after Russian communists branded the latest Bond girl, Olga Kurylenko, a traitor.

The Communist Party in St Petersburg said Kurylenko, a Ukrainian-born model who plays a Bolivian agent in new Bond film Quantum of Solace, had betrayed her roots.

The Soviet Union “gave you free education, free medical care, but nobody knew you would commit an act of intellectual and moral betrayal that you would become a movie kept girl of Bond, who in his movies kills hundreds of Soviet people and citizens of other socialist countries: Cubans, Vietnamese, North Koreans, Chinese and Nicaraguans”, the party said in an open letter.

Despite the party’s outrage, Quantum of Solace is reportedly already breaking international records.

The film – which opens in the US on November 14 and Australia on November 19 – made an estimated $US38.6 million ($56.45 million) overseas in the weekend ending November 3, despite playing in only three markets.

According to media reports, the film made a whopping $US25.3 million in the UK, easily breaking the three-day premiere record held by Harry Potter and the Goblet of Fire.