You’re not a MAN! 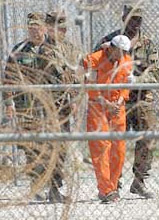 Ahmad M, the interpreter looked at Jim Gordon and said, “no pictures please”.

Yes…you can call me Ahmad M in your report. I was Jamshid’s interpreter for the whole four days…Mr Jamshd was from Yakubi village…Yakubi village? Yes, it’s…. about 45 minutes away from the American military bases.

Yes, it was December 5, a few hours after the rocket attack on the military base that the security guards captured him…the attack happened in the morning and they captured him after sunset…just a few hours…

Jamshid’s only possession was a used Toyota whose family bought for him so he could work as a taxi driver. It was dusk when the guards at the base stopped his taxi at a checkpoint. He was driving back towards Yakubi with three passengers.

He spoke Pashto…with a certain dialect.

My language? I speak Dari and also Pashto.

No I wasn’t there when they arrested them. They found a broken walkie-talkie in Karim’s bag in the trunk. Karim was one of his passengers who said that he had bought it cheap at the flea market. He bought it as a gift for his son.

He said he went to Kabul to buy pastries and clothes for his children for Eid ul-Fitr…the Muslim Holiday.

They confiscated the broken walkie-talkie and an electric stabilizer.

I know she is the second cousin of him and they married four years ago. No, I did not speak to her. She is around 19 and both have a 3 year-old daughter. Yes, I visited his mother Bibi K.

Bibi K. at the door of her stone farmhouse

Jamshid is my youngest son. We all gathered money and bought him a taxi…We? I mean his grandfather, his brothers, and myself…I sold my golden bracelet…over a month ago…

I asked him to give his three sisters a ride from their nearby villages, bring them to our house for the celebration of our Eid. Instead he went to make some money for gas and pastries. He said he will bring his sisters home before sunset. But he never came back.

Did you look at the sky that night? The moon never came out… never! And the next day we didn’t have an Eid! Why? Tell him in the last night of Ramadan, The new moon should appear in the sky…

Stabilizer? What is it? I don’t know what it is! Electric wire?

Sir! We do not have electricity!

That night I had a dream. In my dream giant locusts attacked our wheat farm. They had green eyes. Our land became barren in a blink of eye and my son Jamshid cried out loudly: God…God…God… and I woke up!

He constantly screamed: “God…God…God…” for twenty four hours! For Specialist Joshua C and…-for everyone I should say- it was a kind of funny. His voice…yes…his voice was like a….like a female clown who imitates the voice of a crow…even now when I remember his voice, it makes me burst into…sorry….Yes, at the military detention center at Bagram, about 40 miles north of Kabul…

What? Black cloth hood? Yes, his head was covered in a black hood, and he was shackled from the ceiling…for four days, I guess!

Yes, Specialist Joshua C was sent to his cell to give him some water, but instead Jamshid spat in his face and started kicking…yes, he was chained…Specialist Joshua C got so angry and responded back repeatedly with strikes to his legs…

It became a kind of a running joke…everyone kept going to his cell to kick his legs just to hear him scream out God…God….

They also wanted to give him over 3000 kicks for the number of those who lost their lives on 9/11….

My military boots? Yes, I wore them, of course! All the time. You mean if I…kicked him? No…I mean…you know we were told these enemies are not prisoners of war, they’re terrorists!

The size of the bruise?

The size? … bigger than a fist. One on his right leg and one on his left.

He screamed over and over: “Release me and take me down, I can’t breathe.”

His Pashto dialect was very strong…it was hard for me to understand what he was saying. The guards got annoyed.

In the interrogation room, he was unable to walk, to stand or sit…or hold his cuffed hands…he could not bend his legs when sitting on the plastic chair. He fainted on the floor.

His mouth was dry, his lips cracked.

Specialist Joshua C asked him, “Why did you launch rockets to hit the American base?”

Specialist Joshua C picked a large plastic bottle of water and punched a hole in it. Jamshid’s eyes were fixed on the bottle. Then he tried to take it, but couldn’t hold it. The bottle fell on his orange prison suit. The hole opened bigger and water poured all over him. He moved his fingers slowly to reach the bottle, but his hands were numb, I guess.

Specialist Joshua C grabbed the bottle back and began splashing water forcefully on his face, and shouted, “Drink it bastard, come on, drink it!”

Jamshid’s mouth was dry like a fish out of water! A drop of water dripped from his long black lashes on his lips. It moistened his tongue.

We must make sure the prisoners stay hydrated!

No, we didn’t use dogs. We were well trained to perform our duties.

No, no dogs. Specialist Joshua C had always said: “my nose can detect terrorists from miles away”.

When Jamshid did not answer questions, Specialist Joshua said to him: “If you do not cooperate, you’ll be shipped to a prison in the United States, where you’ll be treated like a woman, by the other men who are very angry with anyone involved in the 9/11 attacks.”

What did I see in his eyes? I can’t remember! But I remember the color of his eyes!

Jamshid opened his eyes and I saw an unexplainable sharp ray flash in his eyes… and then it fizzled out. It died. She grabbed him by his beard, pulled him up and shoved him on the floor, stepped on his feet and kicked him in the groin…then his private parts….He had a small body, about 122 pounds.

Specialist Joshua C shouted: “Fucking bastard, where are the rest of you, son of the bitch?!”

I didn’t translate all the bad words!…I couldn’t….My voice automatically got loud and violent at the same level as his….

His right leg was smashed, like a car had run over it. There was no break. With each strike, the two interrogators questioned him. I think after a while he couldn’t hear the questions anymore. It went on for over 10 minutes. He was just screaming loudly, “Oh…God…God…God” and then suddenly he got silent.

He was then instructed to be kept in chain to the ceiling. In his cell I could hear the inaudible delirious words coming out of his lips…repeatedly: “my wife …is dead!” Then he was silent for a moment.

The last words I heard before I left his cell were:” God! Why are you silent?”

Yes, I used to go to our little church with my aunt when I was a little girl. I used to look at Jesus Christ nailed to the cross, wondering what he would have thought in his last moments before he ascended to heaven.

He must have said: “My God…why have you forgotten me? Why have you deserted me?”

Where is my son? Why no one is telling me where he is? My son? My son is a shy and simple man. He might think we have forgotten him!

He rarely went far from our farmhouse before he got his taxi.

Yes, he shares a room with his wife and has a little daughter.

The name of her daughter? Bibi Rashidah.

No, he never attended school. He has only a small portable radio that he would carry to the wheat fields where he used to work before becoming a taxi driver!

What is written on this piece of paper?

“It tells you where your son’s body is!” Sergeant W responded.

I couldn’t translate his words.

“What is written on this piece of paper?” Jamshid’s mother asked again.

I looked at her, then Jamshid’s wife, then each one of his family members and the crowd, the people of Yakubi village under the pale sun.

Sergeant W looked at me and asked, “Why are you silent?”

Food? Yes, we gave them food and water. Yes, a black cloth hood was pulled over Jamshid’s head. Yes, he was shackled for 4 days.

I’m sure… they provided food! No, I didn’t see him eat.

On the 4th day he started screaming again at around noon. They asked me to shut him up. I went to his cell and said, “Look, please, if you want to be released from the shackles, you need to be quiet.”

He mumbled: “I need a doctor. I need a shot. I don’t feel good. My legs are hurting.”

After a moment of silence he said, “God, why have you deserted me?”

In his voice there was a horrible doubt. I don’t know…I could see the silence of God!

Half of an hour later he was dead!

What is written on this piece of paper?

“It tells you where your son is!” Sergeant W repeated.

I couldn’t translate his words.

“What is written on this piece of paper?” Jamshid’s mother asked again.

I looked at her, then Jamshid’s wife, then each one of his family members and the crowd, the people of Yakubi village under the pale sun.

Sergeant W looked at me and asked, “Why are you silent?”

Yes, I’m charged with assault. The whole situation is unfair! It’s all going to come out when everything is said and done.

Most of them in the military Camp were convinced that Jamshid was innocent.

Yes, I was paid well!

My father? He was executed by the Taliban Regime in 1997.

No, I learned English from the radio…from English speaking stations. Then I took classes….

Yes, I was paid well!

Karim, one of the 3 passengers sent to Guantanamo prison

After 18 months of being in Guantanamo prison, they sent us back home with a letter saying we were no threat to the American forces.

Jamshid’s mother and relatives begged us to explain what had happened to him.

I told them he had a bed. I said Americans were very nice to him because he had a heart condition.

Yes, I was paid very well!

No, no Mr. Gordon, not anymore!

AUTHOR
EZZAT GOUSHEGIR has published four books in Farsi, including two collections of short stories THE WOMAN, THE ROOM AND LOVE and AND SUDDENLY THE LEOPARD CRIED: WOMAN, a collection of two plays “METAMORPHOSIS and MARYAM’S PREGNANCY, and MIGRATION IN THE SUN, a book of poetry. Two of her plays MEDEA WAS BORN IN FALLUJAH and NOW SMILE were anthologized in Witness and Crawdad in 2006. A number of her plays have been produced in the US since she emigrated here in 1986. Among them MARYAM’S PREGNANCY won a Richard Maibaum Award and BEHIND THE CURTAINS received a Norman Felton Award. Currently she teaches creative writing and cultural studies at DePaul University in Chicago. Visit ezzatgoushegir.com.