A case for alaf 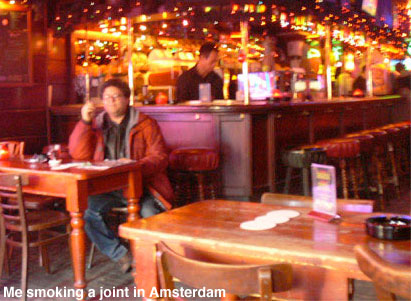 My father didn’t smoke or drink. It was not a religious thing; he didn’t believe in god. He just didn’t like cigarettes or any kind of alcoholic drink. Of course he had chronic heart disease, but even if he was healthy, he would not have indulged in any of that stuff. My mother drank beer or wine on special occasions. I remember seeing her smoking at parties at our house when us kids were growing up, but even that stopped decades before she passed away.

I mention my parents because I want to make it clear that my enjoyment of marijuana has nothing to do with my upbringing. It has been my personal choice.

The first time I tried pot was in 1978, when I was 16. I didn’t even know what it was. I had a summer job clearing wild vegetation around an abandoned mental hospital in Kaneohe, Hawaii. My co-workers were rough and tough Hawaiians whom I tried to stay away from as much as possible. I looked like a sissy and acted like a sissy and I just didn’t want to give them any excuse to tease me.

Well, one day at lunch break I was brushing aside some thick, tall plants and accidently walked into their circle. I didn’t know what to do. I couldn’t turn around; that wouldn’t have been cool. So I just stood there. I didn’t want to look them in the eye, thinking maybe I’d piss them off or something.

I was surprised and a little relieved. At least they wanted me join in and share whatever they were doing. But I didn’t know what a hit was. I knew it probably had something to do with an illegal drug and would land me into deep trouble, especially if my mother found out (my father had passed away a couple of years before). But there was no way I could say no. That would have proved what a wuss I was.

“I’ve never tried it before,” I said.

I hadn’t even tried a cigarette before, except once as a kid, out of curiosity. And I hated it. So I didn’t know how to inhale. I took a drag and held the smoke in my mouth and let it out after a few seconds. My co-workers were cool about it. They knew this was my first experience and did not insist on me taking more hits.

Obviously that half-attempt at smoking pot did not make me high. I was actually repulsed, especially by the smell. There was no way I was going to try it again.

Fifteen years passed. I had a girlfriend at the University of New Mexico in Albuquerque. One weekend we drove to Taos — a popular ski resort near an Indian reservation. We checked into a hotel and at night before going to bed, my girlfriend asked if I wanted to smoke a joint with her. She said it would make sex ten times better. I told her I had smoked it many years ago and nothing had happened. But I would try it with her. And I did, despite being repulsed by the smell. I got mildly high but it wasn’t a life-changing experience at all. I still didn’t understand what was the big deal.

My girlfriend at the time took me to dinner at the home of her friends — a young Greek-American couple who lived near Washington, DC. After dinner they asked if we would like to smoke a joint. My girlfriend had tried it before and was willing to go along if I did. I said I had only seriously tried it once, and it hadn’t really done anything to me. But OK, I’ll share a joint.

I took one drag and everything was cool. But after my second, I began to wonder. Something had happened.

“Do my lips look bigger?” I asked my girlfriend.

“What do you mean?” she started to giggle.

At that point I knew I was high — or something. It was around Christmas and our hosts had a small mechanical Santa Claus doll on their TV which danced when there was a loud noise. I looked at the damned thing and it made me laugh so hard. So hard that I was rolling on the couch for the longest time. I even told my girlfriend to call an ambulance because I couldn’t stop laughing. Everything seemed absurdly funny. It was the most fun I had ever had.

When I moved to the San Francisco Bay Area in 2000, pot became more and more available. At parties many of my friends smoked it and I would take a few drags. About a year later I found a guy who sold pot out of his apartment in San Francisco and I became a regular customer until I left for Mexico a few months ago.

Pot doesn’t make me laugh like crazy anymore, but it does make me relax and I become a much nicer person. And of course it also makes me more imaginative, which has helped greatly with iranian.com :o) Another important point is that pot is not addictive, not for me at least, and certainly not as much as cigarettes. When I travel I have no access to it and I’m fine. I don’t crave it and have no withdrawal symptoms at all.

I’m not bragging about smoking drugs. I know it’s bad for my lungs. But there are so many people smoking marijuana without inflicting any significant harm to society that governments must rethink long-standing policies against its production and use.

For many years now, marijuana and a few other drugs have been legal in Holland. Many of you must have heard of “coffeehouses” in Amsterdam. The open and legal availability of pot has not had any negative impact there. People have not rushed to buy or use marijuana on any large scale — just as many people don’t drink alcohol just because they can buy at any corner store.

The Dutch experience has clearly shown that the legalization of drugs does not lead to the breakdown of society or criminal activity. In fact it’s prohibition that leads to crime and wasting of tens of billions of dollars on a war that cannot be won.

In Chihuahua, Mexico, where I currently live, there’s a major battle going on between drug lords and the military. Just a few hundred feet from my sister’s home there is an intersection known as “Death Crossing” — so named because of the high number of people gunned down by drug gangs and their associates. All because there’s a huge demand for marijuana and cocaine in the U.S. and it’s massively profitable to produce and export.

If the drugs were legal, just like alcohol, the criminal cartels would have no reason to exist and the mountains of money wasted on the drug war could instead be used for public education against drug abuse. Not only would governments stop throwing away billions, but would actually earn a huge amount by taxing the sale of drugs.

Today local governments in several U.S. states have legalized the medical use of marijuana. California is the most notable, especially in the San Francisco Bay Area, where there are now many licensed marijuana clubs. Of course everyone knows that most of the customers are smoking it for recreational rather than medical purposes. It’s only a matter of time before this trend spreads to other parts of the state, and across country. And the sooner the better. This insane, useless and costly prohibition on drugs has gone on for too long.

I leave you with an interview with William F. Buckley Jr, a man who’s no fan of drugs by any means. He’s of course one of the biggest conservative thinkers of our time who understands the futility of prohibition and explains it with simple logic.