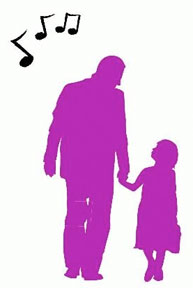 A love story he had carried for so long

Reminiscing a time past, immersing in the time present

A love story long gone, leaving its traces in the still sad song

The sad song that became alive, every time he sang the song

There I sat, a little girl

In admiration of the Singing Man

The Singing Man who felt so deeply

The Singing Man sang of pain, yet it wasn’t pain that he carried

And every time he sang the song, the remnant emotion brought him back to life

And he sat in his vibrancy

Touching every nuance of life

And I sat in his presence — drunken

Not by the words he sang, nor his singing voice

But by how he touched the essence of life

Of which he was so fond

Every time he sang the song

And I, the little girl grew taller

And as though impervious to time, the Singing Man came alive once again

Had no stories to tell except the story of “Dardo Nefrin”

Memories of a love left behind

And out of the communion of the distant past, the past and the present

The little girl herself now taller understood that:

Life is a jubilee

Is swept away by the hands of time

Pain and love leave traces behind

And in those traces, we can find

And if ever the trace is recalled