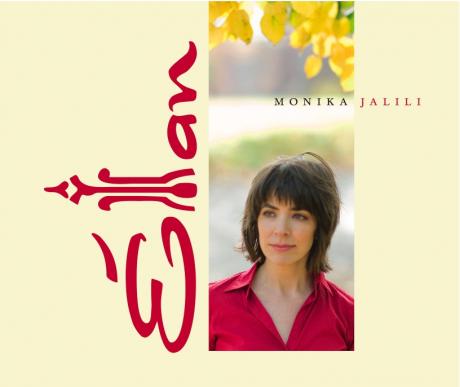 Dedicated to her two year old son ELan and her Iranian husband Reza, Monika Jalili’s new Album “Elan” has all the ingredients that made the success of her first album released two years ago to international success.

ÉLAN is Monika Jalili’s long-awaited second album, following her highly acclaimed debut CD MONIKA JALILI : NOORSAAZ. With ÉLAN, Monika continues her journey exploring and revitalizing the beautiful music and poetry of Iran from the 1940s through the 1970s. Her selections are songs of love, illuminated by stirring, uplifting and sometimes haunting melodies, and performed by masterful musicians. The original Persian and Azeri lyrics are enhanced by Monika’s translations into English and French.

Purchase CD Here or on Amazon.com

Sultan of my heart By Darius KADIVAR

Born in the United States, Monika is of Dutch and German and persian descent. She studied music at The Manhattan School of Music. She was a student of Beverley Peck Johnson. Monika actively pursued a musical theater career in New York and appeared with such talents as Steve Allen and John Astin until her passion for songs of Iran led her, in 2004, to create a project called NoorSaaz with the help of Megan Weeder (now Gould) to explore and perform songs from Iran and to share them with everyone. The musicians of NoorSaaz captured the hearts of young and old Iranians around the world after their October 2005 webcast from Trinity Church on Wall Street. Monika has performed and been interviewed on Iranian television and radio from studios in Los Angeles aired worldwide since 2003. She sings in Persian, French and English languages. Her works are based on Persian folk songs and Persian traditional music, but are naturally infused with her western music training.