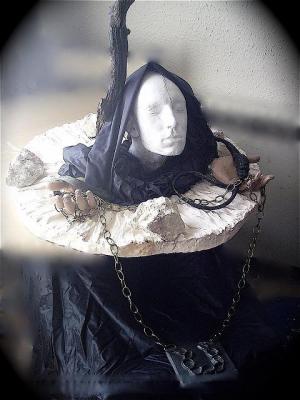 I am at a loss for words. My heart is empty and my tears are flowing.

I have just finished reading the details by attorney Mohammad Mostafaei of the minutes leading up to Delara’s execution.  It is just too painful http://scenews.blog.com/4885252/

Delara, I have known you for almost three years.  We tried our best to keep you alive. We informed  and had the High Commission on Human Rights at the UN, the European Union and Parliaments worldwide act on your behalf. We spread awareness through the media, to human rights groups worldwide. We kept in touch with your family and your lawyers.  We conducted speeches and rallies worldwide. We sent you art supplies in prison and letters from supporters  to keep your spirits high. We tried our best to get in touch with the family of the deceased and convince them to understand the severity of taking a young life away. We tried Delara. We tried but we failed.

You are no longer with us in body, but your presence will live on forever, in the hearts of all the volunteers at Stop Child Executions, all the lawyers and human rights defenders fighting for justice, and  millions of supporters around the world fighting for your life.

If there is one thing I can promise you and your family, is that your death will not be in vain. Your departure from this temporary world we call Earth has emboldened and strengthened our fight to seek justice for the 140 children who remain on death row in Iran.

The Islamic Republic of Iran must be held accountable for their violations against humanity.  Clerical Judge Javid Nia, who approved your execution will be held into account one day.

In Delara’s case, Iran has breached many laws.

Iran is state party to the International Covenant on Civil and Political Rights and the Charter of the Rights of the Child which forbids the execution of those who have committed an offence before the age of 18. Delara was 17 years old when she was allegedly charged of murder. To the bitter end she maintained her innocence.

The initial verdict that was issued, was based on a confession from a child that did not know her rights, and was not made aware of the consequences for taking the blame for a crime she says she did not commit.

Medical examination of Mahin’s body in an autopsy suggested that the crime was committed by a right-handed person. Delara was left handed. If a new trial was accorded to present this new evidence, the death penalty verdict could have been reversed. Delara’s lawyer Abdolsamad Khoramshahi has tried for years to obtain a new trial and carry out a re-enactment of the crime in court, with no success. He is also convinced that due to Delara’s small frame and gentle nature, it was an impossibility for her to have committed the offence.  A partnering lawyer who followed the case, Mohammad Mostafaei, said “I swear she is innocent”.

Whereas the head of Judiciary Ayatollah Shahroudi accorded a 2 month stay of execution in order for the families to try and negotiate  a pardon, Delara was executed in less than 10 days from this order.

Under Iran’s Penal  Code it states that the family and lawyer of the accused are to be given 48 hours prior notice before execution.  No such warning had been given. Instead Delara was executed in secret, like Reza Hejazi and Behnam Zare, with no mother, father or sister to be with her in her last frightening moments or to hear her final words.

In cases of “ghesas” crimes, the decision whether or not to execute the accused rests with the relatives of the victim. What kind of Justice system allows the biased opinion of the family who has lost a family member to decide ones fate?

Around this time two years ago, Delara wrote this beautiful letter to me:http://scenews.blog.com/1772243/

It was touching to read her words to all those who have helped her:

“Say hello to my true loving friends. Every night during my prayers I pray for all the people of this large and vast house. I pray that one day everyone becomes a lover and we all be the guests of Lord’s vast  feast.

I don’t know if I will meet you my dear ones or we must leave the meeting to the unseen world.
Anyway, Delara is not alone, Delaras are trapped in prisons and in need of God’s help and in need of defenders of human right and humanity!!!””

One day we will meet Delara in heaven and she will have thanked us for continuing with the good fight.

Delara, it is so sad and unfortunate that you had to depart like this without your family being able to say goodbye

Stop Child Executions will be launching a full report on executions of juvenile offenders in Iran on June 17th in the UK Parliament via the Foreign Policy Center and I will also be addressing the issue in front of the United Nations Human Rights Council in Geneva at that time.

To see Delara and her family in the documentary we made about her a year and a half ago, please visit: