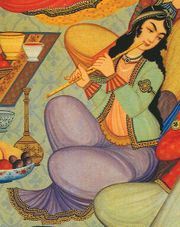 On April 19, when Delara Darabi’s execution was supposedly commuted for two months, I posted a blog that evening with a song called ‘Suffer, Little Children’ by the Smiths. It’s about very young people who have died, we don’t know how or  why. It seems they may have done something, we’re not sure, or maybe we’ve done something to them. And it’s about grief, and what could be the meaning of such short lives. But most importantly, it ‘s about what these young people want to tell us. I posted it that evening because I wanted people to remember that the fight for Delara’s life wasn’t over, and also that for every victory a human rights organization such as SCE wins, there have been many many defeats.

Today a young man who’d played the ney with a noose around his neck died. He’d been convicted of murder and freed from prison for playing the ney,  but a few short years later he died anyway. Azarin said that whether they are freed or not, these kids are always behind bars. And she says Sina represented hope and now she is heartbroken. I say that it is part of hope to be heartbroken.

You know, I talk and I listen to you and you and you, and half the time I really don’t even know what I’m doing here honestly.. But anyway I read you and feel you and breathe you in ways very different from the ways you do each other. Because I’m not one of you. So for me in some sense you’re all different voices and facets and perspectives and reflections of one organic whole: the Iranian expatriate community, especially that of my generation, the generation of the Revolution.

And I’ve noticed that SCE is a very cherished organization here but also one that is surprisingly villified. And I’ve noticed that the youth SCE defends are youth that were born a few years after the Revolution. That is to say, born and raised entirely in the Iran your generation left them. As I wrote when I’d just heard Delara’d been killed, a land of birds where crows hang vultures and doves alike from cranes. In fact, they are about the age of your own children.

And I’ve noticed that these young people are rarely completely innocent;; they are almost always at tje least complicitous in some crime. Yet they are also often not completely guilty either. They seem rather to have been swept up  somehow, by forces larger than themselves, by a combination of the circumstances of their birth and their upbringing, and surrounding events, and by fate and the four winds, and also by the irrationality, the folly and the passion of their youth–that is to say in some sense by the very innocence of their youth– into utterly senseless acts with tragic consequences for themselves and others. They remind me so very much of…

You cannot hope without mourning and you must not mourn without hoping.

(Please try to listen to the song and read the lyrics too or you won’t get the full meaning).

Over the moor, take me to the moor
Dig a shallow grave
And I’ll lay me down

Over the moor, take me to the moor
Dig a shallow grave
And I’ll lay me down

Lesley-Anne, with your pretty white beads
Oh John, you’ll never be a man
And you’ll never see your home again
Oh Manchester, so much to answer for

Edward, see those alluring lights ?
Tonight will be your very last night

A woman said : “I know my son is dead
I’ll never rest my hands on his sacred head”

But this is no easy ride
For a child cries :