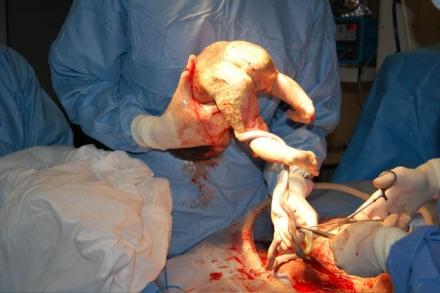 Lila Soraya Salari arrived a day later than her due date, the 28th of April [see photos]. And now shares a birthday with my sister, twin cousins in Raleigh, NC, and an uncle in Mashad. Interestingly, she share the day with the twins who were also born on the 29th.

The day before, at 4am in the morning, I was woken with, “Are you awake?”

“Because you just flippin’ woke me up, that’s why!” I replied sitting up in bed.

She calmly told me that she thought her contractions had started. Dull, aching pain starting in her back. Not too strong. But regular. No need to ring any alarm bells. So we carried on as usual. Got up, breakfasted the boys, took them to school and went about our day with the contractions in background.

“I still want to go to tonight’s antenatal classes.” She ventured

“No way. Who on earth goes to antenatal classes on their due date while having contractions?

And my mum, staying with us to help with the twins over this period was incredulous: “Nana nazaar bere varzesh…”

At 8:30pm that evening at antenatal classes I was watching, V with my eyes on stalks. She was actually doing Yoga stretches in between contractions. During contractions the teacher would come and place her hands on V’s tummy.

“Yes, these are the real thing – I would get ready to go to hospital.” she told us.

It was en-route home that I noticed V, for the first time, hold her stomach and throw her head back in pain. The strength of the contractions had increased thanks to the exercises. But they were still too far apart for us to go to hospital. As soon as we arrived home we both showered and changed knowing that we probably weren’t going to get any sleep that night.

My mum also threw in her penny’s worth: “Varinder, I can see some grey roots. Quickly let me colour your hair before you go to hospital!”

At around 11pm I was slouching on the sofa surfing as, V paced the floor timing her contractions. Then…

“Time to go to hospital!” she announced.

“Can I just finish the last paragraph of this article?”

Never argue with a pregnant and hormonal mum to be in the midst of moderate to strong contractions. I jumped out of my seat and less than 30 minutes later – and a bumpy ride through the forest to Uccle – we were in a birthing suite.

Varinder to me: “What the hell are you undressing for?”

Me: “They’ll give me some hospital overalls too won’t they?”

V: “Yes but don’t stand there in your underpants waiting for the midwife to come back into the room – she’ll think you are a pervert.”

A couple of hours later, V was given an epidural block. As fast as the pain disappeared, the contractions slowed and, as a result, by 7:30 am the baby had not descended any further. Our Gynaecologist, the wonderful, Dr Limboch, entered the suite.

“Even though the baby is fine” he suggested, “I think we should take the baby out now rather than wait for it gets distressed.”.

So later that morning, Wednesday 29th at 9:30am, V was wheeled into theatre and preparations were made for a C-section under local. The theatre sister reminded me to grab my camera and finally gave me the garb I needed to hang around in theatre.

As I was pacing around trying to catch reflections of myself to see what I looked like as a surgeon, I suddenly heard, V in raised French tones:

“I can still see the incision area in the reflection of the overhead light – I don’t want to see it!”

I offered up an original solution.

That was enough to make her yell at me to tell the theatre nurse so she could extend the divider to obscure the ceiling. Once done, V relaxed and we both locked eyes as Dr L and his assistant started carving into the bump. It seemed to take a long time.

As I sat holding, V’s hand I noticed the theatre sister walking around with a camera. A few seconds later it dawned on me that she had picked up my camera and was snapping away merrily without once having asked me if she could. No problem though. But what was she photographing?

There comes a point during a C section (this is our second) when you know the surgeons are getting closer to the baby. A baby whose sex we had kept a surprise even though we knew in our hearts that it would probably be a boy. The number of times V had told people that she was a ‘boy making machine’ and the number of times she had relayed to me her conversation with Dr L during a scan when she thought he had said we are having a boy.

Another interesting observation as they got closer was that the theatre team were chatting, catching up and laughing away as they cut and cauterised. All very routine and laid back.

All the chit chat was momentarily interrupted by a high pitched cry which signalled the baby’s head, at least, had been pulled out.

When the rest followed to cries of congratulations I stood up to take a first look at my new baby boy. And it was then that I was struck by the sight of something so unexpected it left me speechless for a full three minutes. It was a she! A girl. A diddly, screaming, hairy little girl. V and I looked at each other and all I could here was a tearful, V repeating again and again, “Oh my god it’s a girl! We have a little girl! She looks so beautiful!”

The emotions charging through me were as follows:

Euphoria, joy at having a complete family (twin boys and now girl), realisations that hand me downs from the twins would be useless, that I would need to save up for a wedding, that she would be MY girl and that I would spoil her as I saw fit!

After being struck dumb I too began to weep with joy. I would have been less surprised, I am sure, if, V had given birth to a puppy. Before long the baby (we were so sure it was going to be a boy we didn’t even have a name ready) was handed to me to kiss and then to show my beautiful and exhausted, V. She weighed 3.3Kg and was a tall 51 cm.

The very next day Dr L was doing his rounds.

On entering our room: “You are walking!?”

Dr L: “That’s amazing… and you have dressed in you own clothes too.”

Once he saw that, V was not one for relaxing, he ordered all of her tubes and needles to be removed. Four days later we were allowed home with stitches still in place and a batch of blood thinning injections for me to administer. This is two days earlier than is usual in Belgium where all mums are kept in hospital for a minimum of 6 days.

My mum – my wonderful, wonderful mum – who had offered to come and help with the twins so their routines would not be affected – was thrilled when I called to say, V had been released. I wanted the boys to be surprised. And they were certainly surprised if only for a short time.

Kourosh lost interest in his sister as soon as he realised that she wasn’t into Pokemon cards. Siavash was a little more attentive but he too became distracted by his Play Mobil Pirates. What did focus their interest was the sight of, Varinder breast feeding Lila. They were awe struck. Lila’s head looked like a tangerine being pressed into a beach ball. And I took this opportunity to warn them both:

Even now the mere suggestion that I will get mummy to breast feed them has a very positive effect on their behaviour.

So here we are 9 days later and mummy & baby are doing beautifully. In fact, having one baby after raising twins is like a walk in the park. But these are early days. Who know what we are in for as she grows up. Varinder once said to me, many years ago, that she would be scared to have girl in case it put us through what she herself put her parents through as a teenager. And a client once said to me that whereas boys mess up your house, girls mess up your mind.