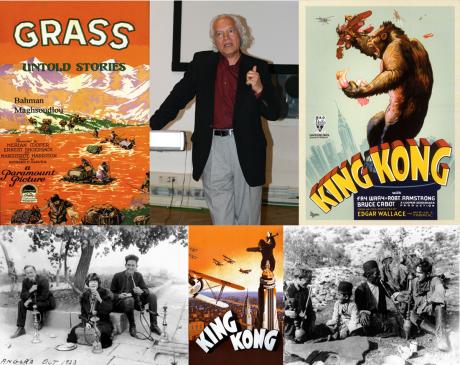 The Extraordinary story behind the adventures of Hollywood Film Pioneers whose first film Grass was shot in Iran amongst the Bakhtiary Tribes. The two were later to gain fame as the Creators of King Kong. Watch Interview of Film Critic Bahman Maghsoudlou on VOA Shabahang.

Available on Amazon.com or At Mazda Pub


Film scholar and critic Bahman Maghsoudlou is the recipient of Iran’s prestigious Forough Farrokhzad Literary Award for writing and editing a series of books about cinema and theater (1975). These include the widely acclaimed “Iranian Cinema,” which was published in 1987 by New York University’s Center for Middle Eastern Studies and is used around the world as a resource on the history of Persian films. He has also authored “Love & Liberty in Cinema” and published a collection of interviews with eleven major filmmakers entitled “This Side of the Mind & the Other Side of the Pupil.” Maghsoudlou’s activities involving international cinema further include participation as panelist, juror and lecturer at a wide variety of film festivals, including the San Francisco Film Festival, the Tri-Continental Festival (in Nantes, France), the Margaret Mead Festival in New York, and the Message to Man Festival in St. Petersburg. As a filmmaker he wrote, directed and produced the short documentary film “Ardeshir Mohasses and His Caricatures” (1972), which was shown at the Leipzig Film Festival in 1996, and “Ahmad Mahmoud: A Noble Novelist” (2004), about the important Iranian novelist, made as part of a series about renowned Iranian artists (it premiered at the Berlin Asian Pacific Film Festival and was selected for ISIS and MESA in 2004 and the 15th Annual Celebration of Iranian Cinema at the UCLA Film & Television Archive Film Festival in 2005. As a producer Maghsoudlou’s films have been selected for more than 100 major film festivals and include “The Suitors” (Cannes, 1988), “Manhattan by Numbers” (Venice, Toronto, 1993), “Seven Servants” with the legendary star Anthony Quinn (Locarno, Toronto, 1996), and “Life in Fog” (1998)–the single most awarded short documentary film in the history of Iranian Cinema. His most recent production, “Silence of the Sea,” won the Ecumenical Prize at the Mannheim Film Festival in 2003, Best Film and Best Screenplay at the Croatia Film Festival in 2004 and Best Music at the Asia/Pacific Film Festival, and was also selected for more than 20 other film festivals including the Sundance Film Festival in 2004. Maghsoudlou is currently producing and directing a feature-length documentary on the history of Iranian Cinema entitled “Iranian Cinema: Searching for the Roots (1900-1979)” and another documentary, “The Life & Legacy of Mohammad Mossadegh.” Having organized the first-ever Iranian Film Festival in New York in 1980, he originated the International Short Film Festival: Independent Films in Iran, which was held in October 2007 in New York. Bahman Maghsoudlou lives in New York.