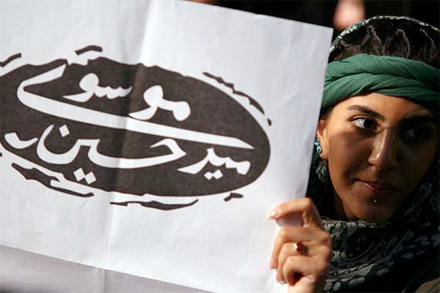 I don’t know how to describe it. I do care about Iran and I don’t. I do care because I was born there and no matter how long I live abroad, I will always be an Iranian. I will always cheer for team melli. Nothing will ever taste better than ghormeh sabzi. These are things I cannot help but love and be attached to.

But at the same time, Iran is and has been BAD NEWS for decades. The country is run by mean, hateful, backward, idiots in the name of god and religion. I wouldn’t last two seconds there. Well, not anymore. I used to be proud of the Islamic Republic. I became a good, practicing Muslim because of the revolution. After thousands of political executions, the deaths of hundreds of thousands in a needless prolonged war, the closure of thousands of newspapers and magazines over the years, the monopolization of power by the clergy, unimaginably cruel stonings, treating women like cattle and persecuting the Bahais like they’re not even human and… finally I said to myself maybe this Islamic Republic is not so great after all. I stopped praying. I stopped believing in Islam. I stopped believing in god and religion completely. I left Iran for good.

I’ve lived outside Iran for 20 years now. My last visit there was in 1995. And I have no desire to go back, ever. Mostly because I want to see the rest of the world and partly because going back to Iran would depress me. I gave too much of myself, my youth, my SOUL, to the Islamic Republic and I’m ashamed of what it turned into. Plus, call me paranoid, but I’m sure somebody from Vezarate Ettelaat will want to have a little chat with me about some of the stuff I’ve published in iranian.com. Hosseleye dardesar nadaaram.

So do I really care who is the next Iranian president? Will this regime fundamentally change if Ahmadinejad loses the election?

By democratic standards, the country’s election process is a joke. Only those inside a small circle of power within the religious establishment are allowed to be candidates. The president is largely powerless when it counts because a) ultimate power rests with the Supreme Leader, and b) even if some progressive bills manage to pass through the Majles, they get shot down by the ultra-conservative Council of Guardians. Plus the government has no control over the Judiciary and therefore cannot even attempt to stop barbaric punishments, nor can it stop the detention and imprisonment of critics, political and human rights activists, and religious minorities simply because of their beliefs. So who cares who wins the election?

Oddly I do. I am so sick and tired of Ahmadinejad that I hope and pray (at this moment in time I hope there is a god) that he gets kicked out of office. I wholeheartedly believe that his defeat in the election will decrease the chance of war and bloodshed. He is a dream come true for the ultra-Zionists who are itching to bomb Iran’s nuclear facilities. This isn’t a trivial matter. I for one cannot ignore this very real danger. And who wants to look at that ugly face for another four years?

Ahmadinejad had a solid lead in the polls. But with Mousavi entering the race, there is a good chance that he could become the next president. He’s a moderate by IRI standards and far less crazy and adventurous compared to Ahmadinejad. So if I could vote, which I can’t in the middle of Mexico, I would vote for Mousavi — because I’m so disgusted with Ahmadinejad. And many people in Iran will do the same. For us watching events from abroad, it’s easy to dismiss the elections in Iran. We live in countries with advanced democracies. We enjoy far greater freedoms. We are too aware of the IRI’s repressive, corrupt, and illegitimate practices.  But for those who live inside Iran, choices are limited. For them the slightest possibility of change towards a less fundamentalist/insane government is better than nothing.