Why I will not vote for Moussavi 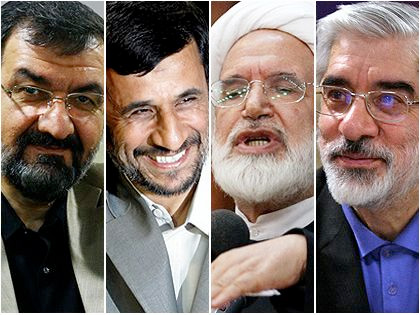 I have given up all hopes of a regime change in Iran.  Heck I can’t even change my own regime (in the French sense of diet) far less fathom the fall of the now almighty, clear-winner-of-the-Iraq-war, Islamic Republic of Iran.  I now, once again, think that perhaps reform from within the system is the best solution for Iran.  I was a big supporter of Khatami until he betrayed the students and all the rest of us in the 18th Tir uprising.  I like much of what Moussavi has to say but frankly he bores me.  I just listened to his TV speech and found myself yawning three minutes into it. I do not agree with Ahmadinejad on 90% of issues but the guy certainly has more chutzpah than this diet-coke of a reformist.

This so called ‘reformist’ does not sound like even he believes in himself.  I have rarely had to suffer through such a lackluster speech!  Do they all sound like opium addicts or is it my imagination?  He talks of bringing joy back to the national arena, of putting color into the every day lives of Iranians.  But frankly the guy looks like a wretched and unhappy fellow who is far from being happy even in his personal life. This is no Iranian Obama.  Moussavi is an old revolutionary, had been, supporter of Khomeini who has stepped in the tired shoes of Khatami.  I don’t care if he has discovered the internet and is following me on twitter.  You can’t bring change to Iran by twittering for god sake!  We have always been great at copying and terrible at innovation.  Karroubi is by far more articulate, eloquent and believable despite being a turbaned establishment mullah.  And frankly something about Moussavi’s denim shirted, flowered rousari-under-the-chador, wife makes me cringe. Color under that symbol of repression does not make it any less mandatory.

They promise the kind of change we secular minded freedom loving Iranians (westernized ‘soosools’ or dandies to the extremists) love to hear about but they just don’t seem like they can deliver.  They do not appear like they can fulfill the dream of freedom for the individual and respect for her human rights that many of us have been harboring since before the Shah’s fall.  That kind of freedom, the kind Europeans and American’s take for granted, seems to be as far-fetched a dream as truly democratic elections.  A dream denied since time immemorial to those of us unlucky enough to come from that part of the world!  If the simple wish for free democratic elections and respect for human rights is a western concept, then by all means I am westernized.  Westernized and proud of it!

I agree that any form of elections is better than none and that the debate that these candidates are engaged in is a constructive and necessary one.  The truth is that even if one believes that this regime would benefit from moderate reformists coming to power, it is really hard to bring oneself to vote.  It is hard because it is a vote of compromise.  It is a vote cast in an electoral system with exigencies that make it quasi-democratic at best. A vote in a system where women are still considered unfit to run for high office does not compel me to perform my duty as a citizen.  Until my diyyeh (blood price) is equal to a man’s and I am accepted as a full witness in court I am only half a citizen in my beloved Iran.  Yet I so badly want ‘change’ in Iran that I would vote for a reformist candidate if he was really inspiring.  I would vote if he was another Khatami in the hopes that maybe this time things would change. I would vote hoping for small, snail-like, slow change.  But this Moussavi guy is so un-inspirational and seems so insincere.  Karroubi’s message of ‘freedom of lifestyles’ has much more luster and rings much truer.  His ads are bold and his own speaking style much more confident.  Moussavi is a watered down version of Khatami.  How can anyone in their right mind believe that this guy could achieve what Khatami failed to deliver so miserably?

The fact is that despite a very animated electoral arena with considerable difference between the candidates these elections are a sham.  No one who does not have Khamenei’s approval will win.  Now it may be that Khamenei wants a reformist as president to facilitate a rapprochement with the Americans that is needed to fix the economy.  I sincerely hope so. But I don’t feel compelled to vote.

I do not want to sound like the LA-cable-TV-monarchists who should have shut up and closed shop after their calls for a boycott of elections failed so utterly four years ago.  I don’t believe a boycott would be effective.  Ahmadinejad, at least, sounds sincere and real.  He actually believes in his own message.  Of course I will never vote for someone who questions the holocaust and believes in halos appearing behind his head at the U.N. of all places.  Nor does the prospect of the election of a ‘reformed’ mullah like Karroubi move me enough to vote.  Although if I had to endorse someone Karroubi would be my pick because he as a cleric will have more legitimacy in an all out struggle over individual freedoms with the rather formidable force of religious conservatives and vigilante Islamists.

I will not vote.  Not because I hope for a regime change, nor because I have any other solution for Iran. I will not vote because these candidates fail to inspire me enough to vote in a sham election that I do not really believe in in the first place!  This two-faced posturing of the reformists tires me.  I won’t begrudge them a win because it might make things a little easier for all of us but I can’t bring myself to actively support them.  I no longer hope for a regime change but don’t ask me to become a follower of Moussavi either.  I simply will not vote out of sheer ennui with the system.