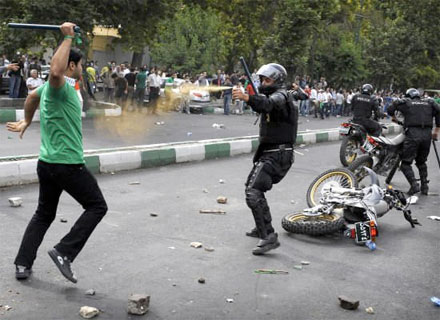 I took a long drag from my cigarette and reluctantly listened to the dude as he tried to explain what was taking place in Iran.  The dude was so excited, he couldn’t control his movements and knocked his friend’s coffee over and burned the poor chump’s lap along with the family jewels. He exuberantly explained that a new non-violent movement is taking shape in Iran which will overthrow the mullahs and bring about freedom and democracy to the whole Middle East. He went on about the green power and the maturity of Mossavi’s supporters who are out in force, demonstrating in a civilized manner to get their votes back which was stolen from them by the man. He talked about Gandhi and Martin Luther King and explained that massive strikes will follow which will cripple the mullahs shortly. As I’m sitting listening to this guy, I’m thinking to myself, what a bunch of bullshit.

I was mostly entertained by Iranian ex-pats who again got it all wrong and started mixing their own pipe dreams with the people in Iran who they have nothing in common with. The chaos became a movement and by the power of internet and CNN, the movement became an uprising. Many of us started comparing it to the revolution of 1979, VOA pointed out the similarities to American civil rights movement and BBC Persian pretty much put the last nail in IRI’s coffin. It was a feast. The best part was watching Iranian experts on every cable news network, looking like deer caught in headlights, trying to explain what is going on in Iran.

From the very first moment of the post-election mayhem, like many of my Tehroni hamshahris, I knew that the so-called movement had nothing to do with Gandhi, Mossavi or MLK. This was nothing like you thought it was. This was neither about the election nor about stolen votes. This was simply an opportunity … to come outside and kick some ass. This was revenge. A payback for 30 years of humiliation. This was all about settling a score. It was about taking on those who have offended us, embarrassed us, beat us, harassed us, infuriated us, shattered our pride, insulted our intelligence and disgusted us by their very presence. It was an opportunity for people who have been spat on and shit on to spit and shit back. This was the right time to come outside and fuck them up in a massive, glorious way. Nothing sweeter than the smell of burning motorcycles and bleeding Basijis running for their lives.  And what’s better than starting the day with rocks in your pockets, a mask on your face and teargas in your eyes. This ain’t for kids. So, take your ideology, non-violent civil disobedience, Twitter and the green flags and shoved them up your you-know-what. The big boys and girls came out to play and it felt so good.

The dream of a quick, non-violent movement that will oust the mullahs and bring about democracy is exactly what it is … a dream. With 500,000 strong revolutionary guards running 2/3 of Iranian economy, from drug trafficking to cigarette distribution channels to nuclear materials, arms exports and access to large number of mercenaries in Iraq, Palestine and Lebanon, you have to be extremely naïve to think that they will just go home because you and your friends decide to Twit and participate in a non-violent movement led by Gandhi and Facebook. These are the days that separate men and women from boys and girls.