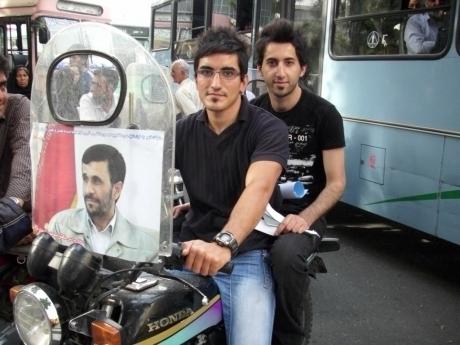 Also on the photo, no they are not basijis on motorcycles! Notice their hairstyle (and their leaflets) which is the fashion (faux pas 😉 these days for young men as opposed to the previous fashion of greasing their hairs. Hair sticking out like a rooster’s crown, a mild version of Sanjaya’s Mohawk! Although, some (not these 2) go overboard and hair really sticks out like crazy. These rallies, especially around Vali Asr median with all the boutiques and sandwich shops was the place for young people to meet and flirt.

The second debate was the most anticipated between Ahmadi and Mousavi. The moderator had his usual clueless look and was useless as usual. He threw in a question which both candidates totally ignored. Ahmadi did not waste anytime and started by saying this is a campaign of 3 against 1. He went on to ridicule the previous Rafsanjani and Khatami regimes. He also ridiculed Mousavi’s regime, although Khamenei was the president at the same time, by saying his regime was better than Khatami and Rafsanjani and “for sure” far, far better than Mousavi’s.

Ahmadi would use the platform of defending the Islamic Republic to unload on Mousavi and said everything he does is to benefit Islam and he has responded to every criticism and said there are more newspapers critical of my Govt and me than they were critical of Khatami and Rafsanjani during their tenure. He said things have improved both nationally and internationally under his watch and he is a servant of the people. Basically he used many of the nationalistic rhetoric that you see in American election cycles or you’d expect an incumbent to say.

Ahmadi did not miss a beat and was on full attack and rapid fire and was not shy to say anything and as I said earlier no generalization at all. He even went on to wave a document about Mousavi’s wife saying “begam? begam?” (should I say, should I say it?) He was very aggressive and had given Mousavi a lot to chew on.

As for Mousavi, he started by saying he wants to use these debateS as his platform to talk to people and will slowly and deliberately explain his positions to the Iranian people. Unlike Ahmadi who normally acts like a baby akhoood, Mousavi’s demeanor in this debate was slow and boring, like a baby akhoond. While Ahmadi was taking no prisoners, Mousavi was being polite and taroofi. He was forgetting what Ahmadi had just said right in front of him and what accusations he had leveled against not only him but 2 previous Govts. Perhaps Mousavi thought if he responds to them something will go wrong or perhaps he thought his direct response would be somehow lowering himself to his level. Whatever the reason I thought he was being too slow and too cautious.

The debates were divided in 2 or 3 half hour or 45 minutes segments. Mousavi’s first segment was slow and his only attacks on Ahmadi was his saga of seeing a halo at UN and his claim of being “stolen” (“berobayadam” 😉 by American agents in Iraq. This opened the door for Ahmadi to pile on more since these 2 issues, while being the first time to be confronted on national TV, were not new.

Only towards the end of his segments did Mousavi realize that Ahmadi had keept piling on and he had wrongly been “polite” and trying to save face by not criticizing the regime as it’d been the first time dirty laundry would be shown in public. He was wrong and he wasted his valuable time and this particularly important debate.

On the holocaust issue in response to Mousavi’s assertion that Ahmadi’s holocaust denial has damaged Iran’s image, Ahmadi said he has taken “couple of positions” on this issue which rahbar (Khamenei) has approved, why are you worried about it? Why are you worried about what the foreign media say? Mousavi failed to respond where this was his opportunity to say that it was not “couple of positions”, not the couple of positions which you took later to “soften” your position but it was the one position that you said “holocaust was a myth” (holocaust afsaanast). He could’ve said why is a historical fact being called a myth? Or asked; would it be fair if someone called our 1979 Islamic revolution a myth? There are actual pictures and videos of holocaust atrocities and eyewitnesses and eyewitness accounts and the buildings and the people who administered them and so on. And why was a leader of America’s openly racist KKK invited to attend an Iranian seminar about this subject?

The next day I was discussing the debate with family and friends and I started using my American perspective and saying while Ahmadi’s positions and claims on issues were nonsense and lies, strictly from the technical point of winning the debates he won the debate because Mousavi did not respond in kind to most of his criticism and gave him a free pass.

They seemed surprised at my view and would argue that this is not the case. Ahmadi was rude and porroo (arrogant) and his accusations and criticism of Khatami and Rafsanjani were a joke since his Govt is much worse. I’d say yes I agree on all these points but it has nothing to do with what Mousavi said during the debate. This debate was between those two candidates, not us. The points you are making are valid and the ones Mousavi should’ve said in the debate when everyone is watching, not the next day.

This debate opened the floodgates and the excitement was much more in the streets. This debate was also a few days later after the Karoubi-Rezaei debate due to holiday of Khomeini’s memorial. While TV was mourning, there was no such mood among the people and they were having fun seaside or other vacation spots.

I remember the following day going somewhere with my cousin; the cab driver had his green on. I debated in the cab that Ahmadi was rude! I said the useless moderator should’ve said something when he brought Mousavi’s wife into the mix and so on. And on my way back the cab driver had an Ahmadi poster in his cab and I debated with him that why did Mousavi criticize Seda va Sima (state run TV) for being bad and under Ahmadi’s control? If it was bad how come it was hosting these live debates and a first in the country? The driver said yes he answered his own criticism but did not realize it.

When we arrived at home my cousin said, I thought when you saw Ahmadi’s poster in his cab you’d zip it! I said why would I?! When I’m on vacation in Iran I am an equal opportunity discusser! We don’t have too many Iranians in America and while in Iran there is nothing BUT Iranians to talk to!

Somehow sometimes my demeanor/clothes/attitude gives it up that I live abroad which makes them pour their hearts out, sometimes.

I thought in this debate Mousavi was a day late and a dollar short and I reluctantly gave the edge to Ahmadi.