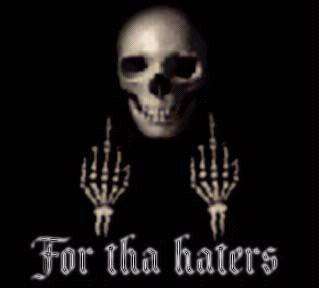 In past few weeks string of characters have appeared in IC which represent ugliest and most dangerous trait of a human being. and That is HATE:

What is it that make these dangerous characters tick? What is it that in this ugly feeling[HATE] that satisfies their most obnoxious and often criminal behavior?

In March of 2003 FBI Law enforcement published result of a 7 year study conducted by John R. Schafer, MA and Joe Navarro, MA on hate groups, aimed at producing a [MODEL] applicable to hate groups of all kinds.

Empirical observations show that hate groups go through seven stages in the hate process. Haters, if unimpeded, pass through these seven successive stages without skipping a stage. In the first four stages, haters vocalize their beliefs. In the last three stages, haters act on their beliefs. A transition period exists between vocalization and acting out. In this transition period, violence separates hard-core haters from rhetorical haters.

Irrational haters seldom hate alone. They feel compelled, almost driven, to entreat others to hate as they do. Peer validation bolsters a sense of self-worth and, at the same time, prevents introspection, which reveals personal insecurities. Further, individuals otherwise ineffective become empowered when they join groups, which also provide anonymity and diminished accountability.

Stage 2: The Hate Group Defines Itself

Hate groups form identities through symbols, rhetoric’s, rituals, and mythologies, which enhance the members’ status and, at the same time, degrade the object of their hate.

Hate is the glue that binds haters to one another and to a common cause. By verbally debasing the object of their hate, haters enhance their self-image, as well as their group status.

Hate, by its nature, changes incrementally. Time cools the fire of hate, thus forcing the hater to look inward. To avoid introspection, haters use ever-increasing degrees of rhetoric and violence to maintain high levels of agitation. Slander, smear tactics, name calling, lying, profanity  and outright inhumane misinformation serves thier purpose in this stage.

Stage 5: The Hate Group Attacks the Target Without Weapons

This stage is critical because it differentiates vocally abusive haters from physically abusive ones. In this stage, hate groups become more aggressive, prowling their turf [IC community in this case] seeking vulnerable targets.

Stage 6: The Hate Group Attacks the Target with Weapons

The ultimate goal of haters is to destroy the object of their hate. Mastery over life and death imbues the hater with godlike power and omnipotence, which, in turn, facilitate further acts of violence. With this power comes a great sense of self-worth and value, the very qualities haters lack. However, in reality, hate physically and psychologically destroys both the hater and the hated.

A blogger targets an ideology, religion, language, gender, or nationality as his/her target. Hate immediately seeks support in the community by publishing hateful blog about his/her target hence attacking the kind[Stage 1]. The group establishes identity using phrases and word and certain type of behavior in the blogging, namely lies, misinformation, character assassination, profanity, name calling and such[Stage 2]. At this point the haters only disparage the target-the hated[Stage 3], they even adopt a name for him/herself which closely represents their hate target[ i.e. hatethis, hatethat]. As time passes the hater openly insult the targeted group of ideology[Stage 4], often under the disguise of [patriotism, nationalism, freedom of expression, freedom of speech] . At [Stage 5] family and the honor of the targeted group is openly insulted. Stages 6 and 7 yet to been seen!