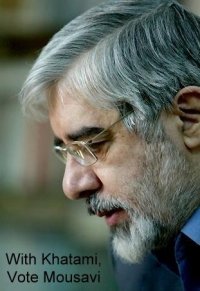 My dear compatriots, do not get me wrong, I am not against the new movement which claims of being fully green and honest. On the contrary, I believe in them and their abilities in creating a new era of new challenges over the lost democracy and skewed justice in our country; but my point is the transparency of their attitudes. Are their thoughts and philosophies transparent enough to convince the common sense and assure the appropriate future outcomes of their efforts? What are their true definitions for the GREEN GOD AND GREEN ISLAM? Have our hindering problems during the past three decades, been just the colour of God and Islam??
Let me be honest with you my dear and highly civilized compatriots, that I have not been able to get the main message within the new philosophy of the GREEN GOD AND GREEN ISLAM! As the designers, the architects of this new thought and philosophy, (who are significant and outstanding figures and well- known for all of us) have not been duly clear and understandable  with their definitions of their main aims. Is religion separate from politics or not??? Are they going to sleep in different rooms or not? These are the most definitive questions which must be necessarily answered and made understandable to nonspecialists, before going any further with the whole idea; but it is obvious that the architects of this new movement are not so willing to use a simple language in their explanations about their main aims.
Therefore, I as an Iranian (who like any other Iranian, am human and scrupulous enough, as my pure and Iranian culture have helped me to be so by teaching me the art of knowing and spotting the limits and borders for myself), am very worried about the new movement and its designers who apparently are preparing another God and another religion for our future: GREEN GOD AND GREEN ISLAM!!
To the designers and architects of the GREEN MOVEMENT,I should say, lest play games with this great and modest nation; lest destroy their hopes; lest hand them to another tyrant God and another oppressive religion. This great nation is the owner of one of the most sifted cultures in the world which prevent them from getting obscene and going astray. These people are spontaneously in love with God, goodness, humanity and any kind of thought and philosophy which is capable of adding somethings to their genuine human beliefs.
And to my dear compatriots, I should say, let’s be aware as we do not have any right to commit an other mistake. Let’s think about the colour of God and religion which have always been the colour of wisdom and elevated human values in our culture. Let’s be aware and cogent. Let’s be Iranian.