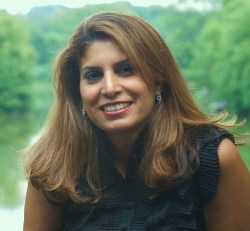 If asked, Bahareh Azizi would be quick to tell you that “tolerance” and “acceptance” are two of her personality traits that she values the most. Having received her Ph.D. in biochemistry from the Georgia Institute of Technology, this successful Iranian American scientist has now turned her sights on politics. In July of this year, Azizi announced that she will be running for the District 6 seat in Atlanta’s City Council. According to Azizi, “I believe in Atlanta, and I know that we can work towards moving her one step closer to reaching her true potential.”

Born in Houston, Texas, Azizi spent most of her childhood growing up in Kuwait. Upon receiving her high school diploma, Azizi returned to the U.S. to attend Michigan State University, where she received her bachelor’s degree in biochemistry and biotechnology. She then moved to Atlanta to pursue a doctorate degree from the Georgia Institute of Technology. Upon receiving her PhD, she joined the staff at the Georgia Institute of Technology in 2005, where she is known as the teacher who connects well with students.
Azizi was also chosen to co-host the educational program Science Investigators on PBS.

A long time resident of Atlanta, Azizi believes that the greatest challenges facing the city are safety, the city’s budget, and transportation. As a firm supporter of increasing the number of police officers on the streets, Azizi believes that the solution lies in “quality” and “quantity” and states, “I would work to ensure that we are utilizing our current force efficiently, and that we as a city are taking care of the needs of our police officers.” She also stresses the importance of balancing the city’s budget and ensuring that public transportation provides safe and reliable services to all of Atlanta’s residents.

Recently, PAAIA and its connected PAC, the Iranian American Political Action Committee, had the opportunity to sit down with Bahareh Azizi and discuss her campaign for Atlanta City Council.

PAAIA/IAPAC: What are some of the challenges you believe your campaign committee must overcome to mount a successful campaign?

AZIZI: Some of these challenges will be name recognition and fundraising.  Because I am a newcomer to the Atlanta political scene, name recognition becomes very crucial in winning a crowded race, and the campaign needs to focus on creative ways to give me that name recognition.  Fundraising is a particularly difficult task in every political race, but even more difficult in times of economic stress.  Taking those factors into account, as well as the number of candidates in the race, fundraising is a tough challenge.

PAAIA/IAPAC: How will you communicate your ideas to the public?

AZIZI: Using a combination of traditional political tactics as well as modern modes of communication.  Target mailing and pamphlet distribution at events, meetings, and forums with voters is being used.  We have created a website (www.VoteAzizi.com), and are also utilizing tools such as Facebook to communicate to voters.  However, the one mode of communication to the public that I depend on the most is going to the homes (door to door) of my constituents, introducing myself, and conveying my platform to them.  This is not only an effective form of communication for someone that does not have the name recognition, but is also quite rewarding. If our budget allows us, we would like to run TV/Radio advertisements as well.

PAAIA/IAPAC: What are the fundraising goals of your committee?

AZIZI: Simply raise as much money as we can.  In a race that is as crowded as the District 6 seat race, the more money we raise, the more literature and communication pieces we can distribute to the voters, the more name recognition I will have.

PAAIA/IAPAC: What differentiates you from your opponent(s)?

AZIZI: I believe that my personal and professional experiences differentiate me from the other candidates.  I was born to Iranian-American parents, raised in Kuwait, and then moved back to the States when I was 18 to attend college.  My multi-cultural upbringing has provided me with an international perspective has made me a very open-minded person, learning tolerance and acceptance, two traits of my personality I am very proud of. On a professional level, I am a scientific researcher.  As a researcher, you acquire critical thinking skills, along with an analytical research-oriented mind that I use to approach challenges and issues.  As a newcomer to the political realm, my analytical skills, along with a fresh perspective to addressing the issues facing our district and city, I know that I can be effective in finding long-term effective solutions.  Because of these qualities, I am able to work with different types of people with ease, working with people to reach compromises and form collaborative forums for finding solutions.  At the same time, I am not afraid to fight for the needs and wants of my constituents when necessary.
I am running because I don’t have a political agenda.  I am running because I believe in working with the constituents of my district and the city of Atlanta towards bettering our neighborhoods, parks, and our schools.  I believe in Atlanta, and I know that we can work towards moving her one step closer to reaching her true potential.  I am certain that with listening, thinking and much care, we can work towards making the difference that is needed in Atlanta.

PAAIA/IAPAC: What particular skills or experiences will you bring to the City Council?

AZIZI: On a professional level, I have strong analytical, communication, and creativity skills that will be very useful in working with other council members and the municipal government, as well as in dealing with various constituents in the district.  I have also been CEO of my family-owned business, helping maintain the finances of the company, a skill that will be extremely useful in balancing the city budget and long-term financial planning.  On a personal level, my strong communication and listening skills, as well as my patience, will serve me well.  I believe in long-term solutions and I will work with other council members to develop a vision for Atlanta.  With that mind-set, we can work to make the changes necessary in our district and the city of Atlanta as a whole.

PAAIA/IAPAC: What are the most critical issues facing the City of Atlanta?

AZIZI: The three main issues facing Atlanta today are safety, the city’s budget, and transportation.  In the past two years, property crime and burglaries have increased dramatically.  We must work towards making Atlanta safer by increasing police patrols throughout our streets, neighborhoods, around our schools, and in our parks.  In order for Atlanta to grow, the city’s budget must be balanced efficiently without compromising the essential needs of the community thereby placing undue burdens on the residents and businesses.  For the sake of preserving our environment, protecting our health and improving the overall quality of life for Atlantans, the city needs to work towards increasing the reliability, efficiency and safety of our public transportation system.  We must also make our streets more accessible to bikers and pedestrians.  We must make our schools more competitive, providing the youth in Atlanta with the best educational resources possible.

PAAIA/IAPAC: How does your campaign plan on addressing some of those issues?

We can also, in an effort to relax budget strains, research alternative forms of revenue for the city of Atlanta.  In times of economic stress, the burden of additional taxes on the residents of this city is not acceptable.  Since Atlanta has a number of non-residents which utilize the benefits of Atlanta, we can explore solutions that would allow for additional forms of revenue for the city, such as collecting an additional fee for liquor and cigarette purchases.  In addition, I would address the inefficiencies, such as bills not being collected and or paid on time and the overlapping duties of city employees, thereby reducing unnecessary expenses.  Another approach is to make sure we are following good accounting measures, such that we are not spending money that does not exist in the budget, and that we eliminate wasteful spending.

I would like to ensure that MARTA is providing efficient, reliable and safe services for the constituents of the City as well as commuters.  I would support initiatives to promote a four-day work week and the use of public transportation.

PAAIA/IAPAC: What role do you think Iranian Americans can play in your campaign and what do you expect from the community?

AZIZI: I am proud of my Iranian American heritage, and I would hope that Iranian Americans, as other Atlantans, would support my campaign based on the issues and plausible solutions included in my platform, as well as my personality and character.  I am here to represent all constituents of the District, despite of their race, sexuality, gender, ethnicity, nationality, or religious affiliation.  We are, above all, humans that have the same stake in our homes, schools, and neighborhoods.  We love Atlanta and want to see Atlanta reach her true potential and become more of a world player.  Nevertheless, I would hope that Iranian Americans realize that as more Iranian American candidates run for public office, the entire community will move even further into the political realm of this country, giving back to our community and helping advance the lives of Iranian Americans living in the United States.  It is up to us to set an example for those with similar backgrounds all across the world.

PAAIA/IAPAC: What role can organizations like PAAIA/IAPAC play in assisting your campaign?

AZIZI: PAAIA/IAPAC can play an extremely important role in bringing awareness to my campaign within the Iranian American community, not only in Atlanta, but nationwide.  The organization has the ability to assist me with generating more interest and support amongst the Iranian American community nationwide.  In a race that is as crowded as this is, and where funds are extremely crucial, PAAIA/IAPAC can be quite instrumental in helping my campaign reach its fundraising goal as well.